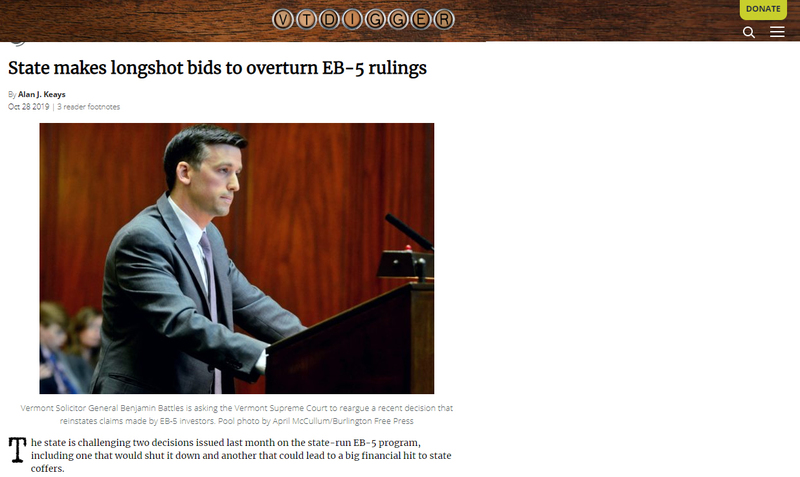 Vermont Solicitor General Benjamin Battles is asking the Vermont Supreme Court to reargue a recent decision that reinstates claims made by EB-5 investors.

The state is challenging two decisions issued last month on the state-run EB-5 program, including one that would shut it down and another that could lead to a big financial hit to state coffers.

In separate filings in the Vermont Supreme Court and with the federal agency overseeing the Vermont EB-5 Regional Center, the state is seeking to overturn the two rulings stemming from the Jay Peak immigrant investor scandal.

Each filing appears to be a longshot bid, with the state seeking to have both the high court and the federal agency reverse decisions.

The U.S. Citizenship and Immigration Service issued a notice of termination for the Vermont EB-5 Regional Center in 2016 and shut down the center a year later. The federal agency has twice issued statements taking the state to task for failing to stop the fraud at Jay Peak.

The Vermont Department of Financial Regulation filed an administrative appeal of the termination last year. In September, USCIS rejected the state’s arguments. On Friday, the state asked the federal agency to reconsider the appeal again.

In a separate filing, the Vermont Attorney General’s Office is calling on the Vermont Supreme Court to reargue a ruling that investors can pursue negligence and misrepresentation claims regarding lax oversight of the state-run regional center and Jay Peak ski resort projects.

The state is not, however, fighting claims Brent Raymond and James Candido, the two former directors of the state-run EB-5 program, could be on the hook for allegations of gross negligence from investors.

The attorney general’s office, in a filing with the high court, contends the justices got it wrong in their ruling earlier this month, at least when deciding EB-investors could move forward on their negligence and misrepresentation claims against the state.

The Vermont EB-5 Regional Center, which falls under the jurisdiction of the commerce agency, was responsible for supervising the Jay Peak Resort developments in the Northeast Kingdom from 2006 to 2016.

During that period, the developers, Quiros, Jay Peak’s owner at the time, and Stenger, who was the resort’s CEO, misused $200 million in EB-investor funds, according to civil lawsuits brought more than three years ago by state and federal regulators.

Several investors sued in 2017, claiming that the state did not stop the 10-year fraud even though it was happening right under their noses through its regional center.  Barr Law Group, representing the investors, argued that they ought to be able to sue the state for negligence, breach of contract and misrepresentations.

The Supreme Court, in its decision, said EB-5 investors in projects headed by Jay Peak developers Ariel Quiros and Bill Stenger could litigate those claims against the state Agency of Commerce and Community Development, which oversees the regional center.

That ruling by the Supreme Court reversed a lower court ruling dismissing the negligence and misrepresentation claims against the state. The high court also reinstated other claims including breach of contract, and breach of good faith, against the state commerce agency regarding its oversight of Jay Peak Resort projects through the state EB-5 regional center.

Gross negligence claims against Raymond and Candido, two former directors of the state-run EB-5 program, that had been thrown out by the lower court, were also allowed to move forward as a result of the high court ruling.

The Vermont Attorney General’s office, in its recent filing, is only asking the Supreme Court to reverse its ruling regarding the negligence and misrepresentation claims against the state.

“The Court should grant the defendants’ motion to reargue and affirm the dismissal of the negligence and negligent misrepresentation claims against ACCD,” Vermont Solicitor General Benjamin Battles of the attorney general’s office wrote in his filing.

Russell Barr, a Stowe attorney for the investors who brought the lawsuit on behalf of EB-5 investors against the state, on Friday disputed the Attorney General’s Office contention.

“While it is their right to do so, we are confident that the Vermont Supreme Court correctly decided the claims it remanded to the trial court in its comprehensive 35-page decision,” Barr said in a statement.

“It is worth noting,” Barr added, “that the Attorney General did not seek to reargue the breach of contract and breach of good faith and fair dealing claims against the ACCD, along with the gross negligence claims against Brent Raymond and James Candido.”

Battles was out of the office Friday and could not be reached for comment.

“The question is whether negligence and negligent misrepresentation claims against the Agency of Commerce and Community Development are barred by sovereign immunity,” the statement read. “We are asking the Supreme Court to answer that question before we head back to the trial court.”

The Supreme Court doesn’t often rule in favor of motions for reargument.

In fiscal year 2018, of the 43 motions for reargument, only two were granted, or about 4.6 percent, according to court statistics.

The Attorney General’s Office, in its filing, makes two specific arguments in claiming the court got it wrong when it comes to reinstating the negligence and misrepresentations claims against ACCD.

First, Battles wrote in the state’s filing that the investors had waived their right to pursue the negligent and misrepresentation claims against the state by failing to specifically raise them in their appeal, and then did not raise them during the oral arguments in the case.

Barr on Friday disputed that, pointing specifically to the “Statement of the Issues’ portion of his brief, which includes those claims among those he is seeking to appeal.

Battles also argues that under the Vermont Tort Claims Act the state has never waived misrepresentation claims from sovereign immunity protections. As a result, Battles wrote, those claims cannot be brought against the state.

According to Barr, the state’s highest court knew of that contention now raised by the state when it decided the issue earlier this month.

“The Supreme Court was well-aware of that when it decided the appeal and remanded the negligent misrepresentation claim to the trial court,” he said in a statement.

The high court, in its decision, cited the private sector activity the state was engaged in through the EB-5 program that allowed Barr to pierce the state’s sovereign immunity defenses, at least in the claims it permitted him to proceed on.

“For these reasons, we conclude that, unless an exception applies, the Vermont Tort Claims Act waives the State’s sovereign immunity with respect to plaintiffs’ claims,” the high court ruled.

Barr, in his statement, dismissed the latest arguments by the Attorney General’s Office.

“All of the AGs arguments raised in this new filing were raised in the briefs on appeal which were rejected by the Vermont Supreme Court,” Barr wrote.

Currently, a handful of the more than 800 EB-investors who put money into the projects led by Stenger and Quiros are plaintiffs in the lawsuits, however, Barr is seeking a class-action certification to include even more who are ready to join in.

Each EB-5 investor put $500,000, plus administrative fees of as much as $50,000 into one of a series of projects at Jay Peak as well as other parts of the Northeast Kingdom. In exchange, if that $500,000 led to the creation of a 10 American jobs, the investor was eligible for a green card and permanent U.S. residency.

While Stenger and Quiros reached financial settlements on the civil lawsuits brought by regulators, they were indicted this spring on federal fraud and false statements charges related to a failed project to build a $110 million biomedical research center in Newport.

The case against Quiros and Stenger, as well as two of their associates, remains pending.

Mike Pieciak is the commissioner of the Vermont Department of Financial Regulation. Pieciak is appealing a U.S. Citizenship and Immigration Service decision to shut down the state-run EB-5 program.

The filing for reargument before the Vermont Supreme Court comes as the state Department of Financial Regulation sent out late Friday its appeal of a decision by a federal agency to shutter the state-run EB-5 regional center.

That filing is the latest move by the state in a long-running battle with U.S. U.S. Citizenship and Immigration Services to keep the regional center open.

The state had earlier appealed a decision to terminate the center. USCIS had determined that the state failed to protect the interests of EB-5 investors from harm.

The state appealed that ruling, asking to “wind down” the operations of its regional center, rather than abruptly closing it. The state had argued that it has taken steps to improve its oversight of the regional center and has no plans to take on any other new projects.

USCIS denied that appeal in September, standing by its decision, stating, “we conclude that the VRC no longer continues to promote economic growth and does not warrant the preservation of its regional center designation.”

That prompted the state’s motion Friday to reconsider the latest USCIS determination. State officials have conceded that the request by USCIS to reconsider its own decision is not likely to be granted and rehashed two previous appeals to the federal agency.

“We don’t anticipate success on these motions, but we do think it’s important that all of that information is clear in the record,” Michael Pieciak, commissioner of the Vermont Department of Financial Regulation, said earlier this month when talking about the decision to submit the reconsideration filing.

The state contends that as many as 150 EB-5 investors from across all the projects in the state may be at risk of not obtaining their green cards if the center were to close now.

Investors at risk include not only those who put money into projects led by Stenger and Quiros, but others who backed other separate projects by different developers.

Those other developments include ones of Mount Snow, a ski resort in Dover, and the von Trapp Brewery in Stowe, which are both past the solicitation of investors and construction stages.

In its filing Friday, the state made several arguments for keeping the EB-5 regional center open,

chiefly disputing the USCIS contention in its latest ruling that it was not promoting economic growth.

“The promotion of economic growth has continued at the Trapp Family Lodge project even since the (notice of termination) was issued in 2017,” the filing stated.

Also, the filing stated, construction projects under Michael Goldberg, the court-appointed receiver at Jay Peak, have been ongoing, including at the Stateside hotel and condo site.

If USCIS denies the state’s bid to reopen the case, the state could file a lawsuit in federal court against the agency in its effort to keep the EB-5 regional center open.