Receiver ‘hopeful’ for Jay Peak sale in 2020, but warns of ‘significant loss’ for investors 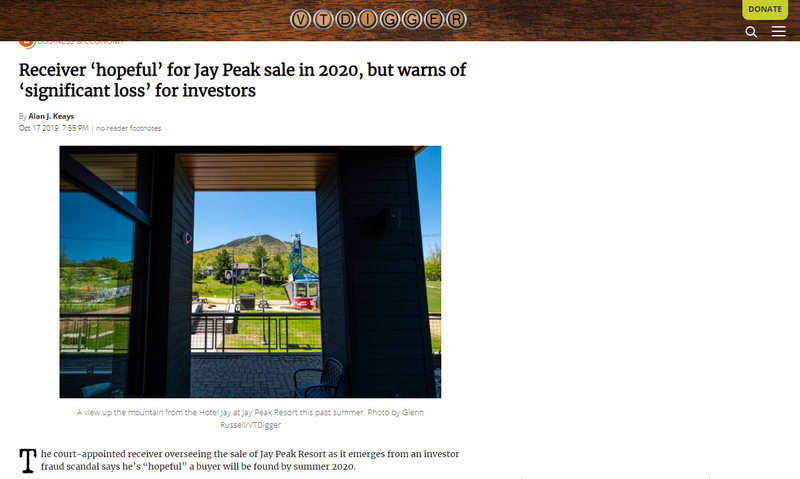 A view up the mountain from the Hotel Jay at Jay Peak Resort this past summer.

The court-appointed receiver overseeing the sale of Jay Peak Resort as it emerges from an investor fraud scandal says he’s “hopeful” a buyer will be found by summer 2020.

However, the receiver added in a filing Thursday, those foreign EB-5 investors who put money into a series of upgrades at the resort over a nearly 10-year span and haven’t yet been paid back shouldn’t expect to recoup all the money they put in.

“The Receiver is not sure of what price the Jay Peak Resort will ultimately sell for,” Goldberg’s filing stated.

But, the receiver wrote, based on what he knows so far he is “fairly certain” that many of the EB-5 investors will “incur a significant loss of their principal investment.”

EB-5 investors each put up at least $500,000, plus as much as $50,000 in administrative fees, into the massive improvements at the resort, including new hotels, condos and a waterpark.

“The Receiver wants to assure all investors,” Goldberg added, “that he and his professionals are doing their best to obtain the highest possible price for the resort by conducting a vigorous and fully transparent sales process.”

The proceeds of the sale of the resort, subject to the approval of the court, will be distributed on a “pro-rata basis” to the EB-5 investors in the resort who have not yet been paid back their $500,000, the filing stated.

Resort officials, including Goldberg, have said little publicly about the sale process that has been underway for the past seven months. The report Thursday provides a glimpse into that process.

The resort would need to sell for well more than $150 million to make all the Jay Peak investors whole, a figure that seems out of reach.

The town of Jay assessed the resort on the grand list at $124 million. The U.S. Securities and Exchange Commission, during a court hearing, valued Jay Peak at $42 million, basing that figure on average profits.

Michael Goldberg, the court-appointed receiver in the EB-5 fraud case, speaks at a Statehouse news conference in April 2017.

Goldberg earlier this year hired the investment banking firm Houlihan Lokey Inc. to help out with the sale of Jay Peak.

In the court filing Thursday, Goldberg reported that Houlihan Lokey had marketed Jay Peak to more than 140 potential buyers in the United States, Europe and Asia.

Of that group, according to Goldberg, nine potential buyers have submitted “initial indications of interest” and three more have been provided “informal initial pricing guidance,” but did not submit bids.

“The Receiver is unsure when a transaction will close,” Goldberg wrote, “but is hopeful that a sale transaction can be consummated by summer, 2020.”

Goldberg did not identify any of the potential buyers in the filing.

At a meeting last summer before the Jay Zoning Board, a resort official indicated that potential buyers include the Denver, Colorado-based Alterra Mountain Company, which also owns Mont-Tremblant Ski Resort in Quebec and Stratton Mountain Resort in Vermont.

Goldberg has been the receiver in charge of the resort since April 2016.

That’s when separate civil lawsuits filed by the state and federal regulators accused Ariel Quiros, then Jay Peak’s owner, and Bill Stenger, its then-CEO and president, of misusing $200 million of investor funds raised through the EB-5 program.

In addition to the projects at Jay Peak, the two developers also took on other projects, including a hotel and conference center at Burke Mountain ski area as well as the failed biomedical research facility proposed for Newport.

The Newport project, known as AnC Bio Vermont, led federal prosecutors in May to file criminal fraud charges against Quiros, Stenger and two of their associates.

Both Stenger and Quiros have reached monetary settlements in those civil actions, with neither admitting or denying the allegations against them. The criminal cases against both remain pending and they have pleaded not guilty to the charges against them.

The sale of Burke Mountain ski area and its hotel and conference center is on “indefinite hold,” according to court filings.

That sale is on hold, according to Goldberg, because the project failed to generate the required jobs needed for EB-5 immigrant investors to obtain the U.S. residency they hoped for when they each put $500,000 into building a hotel there. He hopes to improve the profitability of the resort and reach those job-creation numbers.

The filing Thursday by Golderg is the seventh “interim report” he has submitted since his appointment as the receiver more than three years ago.

The filing was made to the federal court in Miami where the SEC brought its civil case against Stenger and Quiros. That case was filed in Florida since that is where Quiros resides and many of his businesses are based.

The interim report provides the court with an update on Goldberg’s receivership activities.

In his report, Goldberg wrote that he anticipates filing additional lawsuits to try to recoup money from investors.

The receiver has previously filed lawsuits against a variety of entities tied to the case, including Raymond James & Associates, a financial services firm used by Quiros. Goldberg later reached a $150 million settlement with that firm.

Other cases remain pending, including one brought by Goldberg against Quiros’ former lawyer.

Meanwhile, Goldberg submitted another court filing Thursday seeking payment for the latest fees he has accumulated as well as those for other professionals, such as accounting and law firms, in overseeing the receivership from March through August.

In the recent fee request filing, Goldberg wrote, as he has in the other fee request submissions, that he and his firm, Akerman LLP of Fort Lauderdale, Florida, as well as the other professionals working with him, have reduced their standard rates.