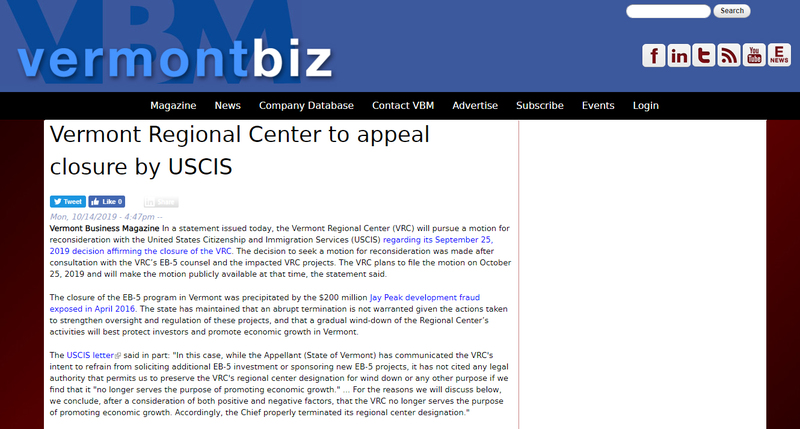 Vermont Business Magazine In a statement issued today, the Vermont Regional Center (VRC) will pursue a motion for reconsideration with the United States Citizenship and Immigration Services (USCIS) regarding its September 25, 2019 decision affirming the closure of the VRC. The decision to seek a motion for reconsideration was made after consultation with the VRC’s EB-5 counsel and the impacted VRC projects. The VRC plans to file the motion on October 25, 2019 and will make the motion publicly available at that time, the statement said.

The closure of the EB-5 program in Vermont was precipitated by the $200 million Jay Peak development fraud exposed in April 2016. The state has maintained that an abrupt termination is not warranted given the actions taken to strengthen oversight and regulation of these projects, and that a gradual wind-down of the Regional Center’s activities will best protect investors and promote economic growth in Vermont.

The USCIS letter said in part: "In this case, while the Appellant (State of Vermont) has communicated the VRC's intent to refrain from soliciting additional EB-5 investment or sponsoring new EB-5 projects, it has not cited any legal authority that permits us to preserve the VRC's regional center designation for wind down or any other purpose if we find that it "no longer serves the purpose of promoting economic growth." ... For the reasons we will discuss below, we conclude, after a consideration of both positive and negative factors, that the VRC no longer serves the purpose of promoting economic growth. Accordingly, the Chief properly terminated its regional center designation."

The VRC, opened in 1997, has communicated with the affected projects to apprise them of the USCIS decision. Mount Snow and the Von Trapp Brewery are the only remaining EB-5 projects in the state under the program. It is not clear what will happen to those projects or the foreign investors involved in those peititions.

One of the other incomplete projects, which could leave EB-5 foreign investors in limbo, is the Burke Mountain project.

The fraud involving the EB-5 projects surrounding Jay Peak included the Anc Bio facility proposed for Newport, which was never built, and the Burke Mountain hotel and ski area upgrades, which were. Receiver Michael Goldberg has been able to transfer the EB-5 petitions from Anc Bio to another project in New York City.

Goldberg has been able to satisfy the EB-5 requirements for investors at Jay Peak and is actively attempting to sell the ski resort and associated buildings. But Burke has not achieved yet the EB-5 required employment mandates.

At Burke, however, Goldberg has expressed concern that if the state loses its appeal, those investors may have no other place to turn to get their permanent "green cards" or get their investment returned ($500,000 and $50,000 in fees). Goldberg has focused on getting investors their green cards.

Goldberg said in his Sixth Interim Report filed May 20, 2019, that: "Phase VIII (Burke) is the most challenging project of the receivership from a financial and immigration perspective for a several reasons. First, the construction of the hotel has failed to create enough jobs for all investors. Most recent estimates indicate that the project is short 60 to 100 jobs (6 to 10 investors) and currently there is not enough jobs for up to 10 investors. Second, USCIS has terminated the Vermont Regional Center. The termination of the Regional Center arguably constitutes a "material change" under the immigration laws and may be a significant problem for those investors who have not yet received approval of their I-526 petitions. The State of Vermont, which owns the Regional Center, is challenging USCIS's decision. Finally, the Burke Mountain Hotel has been operating at a loss and the Receiver has been forced to supplement its operations from other funds. The Receiver is using funds generated from litigation, settlements and the sale of other assets to subsidize the Burke Mountain Hotel's operations.

"With respect to the first two issues, the Receiver is faced with a chicken-egg problem. The Receiver could invest more money into the Burke Mountain Hotel to create enough jobs for each investor, however, in the event the State of Vermont's appeal fails and the Regional Center is fully and finally terminated, such investment could be a waste of money in the event the additional investment does not create an concomitant increase in the sales price of the Burke Mountain Hotel. Investing additional funds only makes sense in the event the State of Vermont is successful in its challenge to the termination of the Regional Center or the increased investment will increase the eventual sales price of the hotel by the amount invested. Therefore, the Receiver is analyzing potential investments and pursuing a strategy of actively supporting the State of Vermont's appeal of the termination of the Regional Center and is also considering other action on his own to assist the Phase VIII investors. If successful, the Receiver will invest as much money as necessary, subject to the Court's approval, to create enough jobs as needed for each investor to meet their immigration requirements. Only after the Receiver is certain that he has done his best to protect the investors from an immigration perspective will he seek to sell the Burke Mountain Hotel, as it is the Receiver's belief that all investors were motivated to make this investment in order to obtain their green card."