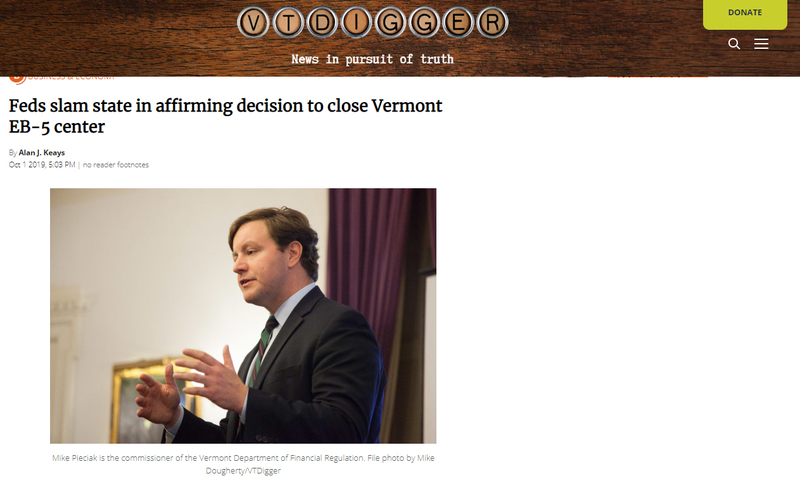 Mike Pieciak is the commissioner of the Vermont Department of Financial Regulation.

he federal government has rejected an appeal by the state, reaffirming its earlier decision to terminate and shutter the scandal-plagued Vermont EB-5 Regional Center.

The  U.S. Citizenship and Immigration Services, in a blistering decision, notified the state Tuesday that it was denying the appeal. The state had argued in its appeal filed in September that it should be allowed to wind down the operations of its EB-5 regional center, rather than abruptly close it.

“Upon a close examination of the totality of the circumstances and the factors, we determine that the negative indicia here outweigh the positive,” the USCIS stated in its 10-page decision rejecting the state’s appeal.

“Accordingly,” the decision stated, “we conclude that the VRC no longer continues to promote economic growth and does not warrant the preservation of its regional center designation.”

The USCIS decision comes on the heels of criminal charges filed in May against four businessmen, including Jay Peak’s Ariel Quiros and Bill Stenger, for wire fraud and making false statements about a failed EB-5 financed biomedical research facility they proposed to develop in Newport.

The Vermont Department of Financial Regulation officials say they are “reviewing the decision and weighing its legal options.”

The state could file a motion for reconsideration or appeal the decision to federal court.

Michael Pieciak, commissioner of the Vermont Department of Financial Regulation, said the state has 33 days from Tuesday to file for reconsideration, if it opts to do so. In the meantime, he said, since an appeal right still exists, the state plans to operate the center as it has been.

Pieciak said he wasn’t too surprised by the decision.

“It’s basically an internal to USCIS decision. It’s an administrative law judge within its own agency,” Pieciak said. “The outcome isn’t all that unexpected.”

He added, “A different venue would be more favorable to the state’s arguments.”

In arguing for a wind-down of the center, the state contended that it was the best course to protect Mount Snow, a ski resort in Dover, and the von Trapp Brewery in Stowe, which are the only remaining EB-5 projects in the state under the program, as well as investors in earlier projects.

The state also pledged to not take on any new projects.

However, the USCIS contended in its notice of termination in the summer of 2018, and again its decision rejecting the state’s appeal, that the state dropped the ball by failing to stop a $200 million fraud in projects in headed by Jay Peak developers over nearly a decade.

The USCIS did recognize steps taken by the state to clean up the program in the wake of the fraud, but added that wasn’t enough to keep the center open.

Pieciak said that all the active EB-5 projects under the regional center, including the ones for Mount Snow and von Trapp, are all past the solicitation of investors and construction stages.

“The real question is how will USCIS deal with investor petitions,” he said, estimating that as many 150 EB-5 investors from across all the projects may be at risk of not obtaining their green cards.

“Any investor that has not yet received its initial 526 petition, or if they have received their petition and have not yet sought legal entry into the U.S., those are the investors that will be impacted,” Pieciak said.

“They had nothing to do with the fraud,” the commissioner added. “I think it’s an unfair result to have them impacted from a immigration standpoint.”

The USCIS decision issued Tuesday stated while sympathetic to those investors whose immigration status may be at risk, the termination of the regional center stands.

In its decision, the USCIS laid out the pluses and minuses of terminating the center.

USCIS reiterated many of the concerns it had raised in its earlier notice of termination. In that notice of termination, USCIS wrote that the state made “material misrepresentations” when it signed off on AnC Bio Vermont, the Newport project that has led to the criminal federal charges against the four developers.

The latest ruling also talked about the criminal charges, which had been filed since USCIS initially called for the termination of the regional center.

The decision stated that there are no provisions in the law permitting a “wind-down” of a regional center, and that such a result would not serve the purpose, with the center no longer taking on new projects, of the program’s goal of “promoting” economic growth.

“In addition,” the decision stated, “although (the state) has offered evidence on the efforts to promote economic growth, the record shows that most of the purported capital raised and jobs created were linked to the Jay Peak Projects, which, according to federal and state authorities, were part of a large-scale fraudulent scheme.”

Ariel Quiros, center, arrives outside federal court in Burlington for his arraignment on charges pertaining to the EB-5 fraud case on May 22.

Also, according to the decision, “the record shows the Appellant had learned that Mr. Quiros, Mr. Stenger, and other individuals may have engaged in wrongdoing concerning the Jay Peak Projects, but did not share such information with USCIS until 2016, after SEC initiated its action.”

The decision stated that concerns had been raised about the Jay Peak EB-5 projects as early as November 2011, and in February 2012, Douglas Hulme blew the whistle on the Ponzi scheme, informing 100 immigrant attorneys that Jay Peak’s financials were not on solid footing.

Hulme, owner of Rapid USA, an EB-5 middleman, had worked for Jay Peak at that time before breaking away after sounding the alarm.

In light of the allegations of fraud and misappropriations of funds associated with the Jay Peak projects, the decision stated, it is difficult to confirm the job creation number attributed to the projects by the state.

Investors who put up $500,000 in a project are eligible for green cards, or permanent U.S. residency, if their investment leads to the creation of 10 American jobs.

The decision added that investors, who relied on representations that the projects had state oversight, had lost confidence in the regional center.

“The lack of confidence in the oversight and monitoring capabilities on part of the investors and businesses diminishes the ability to promote economic growth,” the decision stated.

Meanwhile, Baker Donelson, an outside law firm hired by the state to handle the appeal and regional center compliance matters with USCIS since August 2017, has racked up a bill so far of $49,849, according to Pieciak, the state’s DFR commissioner.