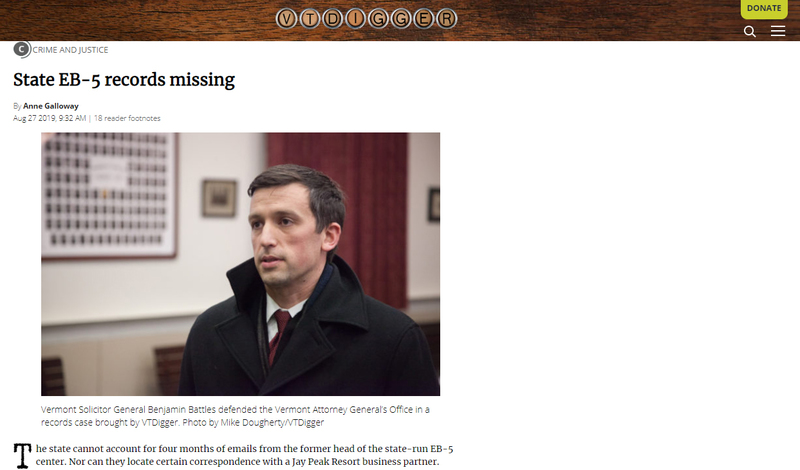 Vermont Solicitor General Benjamin Battles defended the Vermont Attorney General’s Office in the case of a record brought by VTDigger.

The state cannot account for four months of emails from the former head of the state-run EB-5 center. Nor can they locate certain correspondence with a Jay Peak Resort business partner.

A report from the Vermont Attorney General’s Office and the commerce agency says James Candido’s emails from May to October 2010 are missing.

The AG’s office also cannot find communications between Candido and Douglas Hulme, an immigration broker who worked for Jay Peak, which was obtained by VTDigger through a third party.

The Vermont Attorney General’s Office was unable to locate the records in a database of 3 million pages of litigation hold documents in the Jay Peak case, or from the Agency of Digital Services archive, which retains the email of state employees, or external hard drives that were identified in response to a lawsuit lodged by VTDigger in January.

As part of a settlement earlier this month, in an eight-month legal dispute with VTDigger over EB-5 records, the attorney general disclosed that it may have permissibly destroyed documents.

The Vermont Attorney General’s Office says email records may have been deleted by Candido, the commerce agency, or the Agency of Digital Services as part of a periodic email purge when state servers were overloaded. The email communications may have been deemed “non-substantive,” according to the AG’s office.

VTDigger asked that the AG’s office interview Candido determine what happened to the records. That request was denied.

In all, VTDigger received about 300 pages of records as a result of multiple searches conducted by the Vermont attorney general, including press releases, repeated communications, official filings with the federal government, and a handful of email communications between state officials, Hulme or Sen. Patrick Leahy’s staff.

The records produced as a result of the lawsuit is an indication that other documents also may have been destroyed. The Oct. 9, 2015, litigation hold for EB-5 records was put in place by former Vermont Attorney General Bill Sorrell six months after the state began its own investigation and more than a year after Gov. Peter Shumlin asked for the state securities division to oversee the Vermont EB-5 Regional Center program.

VTDigger has long sought state communications and records pertaining to the relationship between the state’s top politicians and Jay Peak.

The developers of the ski area on the Canadian border bilked more than 800 foreign investors and misused $200 million over a 10-year period. The Securities and Exchange Commission brought the Ponzi scheme to a halt in April 2016.

How the fraud continued unabated for a decade under the noses of state officials has never been explained.

Investors say they put their faith in Jay Peak because Leahy and Shumlin and Gov. Jim Douglas all put their imprimatur on the projects and touted the state’s oversight.

Candido, the director of the state center from 2006 to June 2012, served under Douglas, a Republican, and Shumlin, a Democrat. Both governors, the congressional delegation and a rotating slate of state bureaucrats worked to promote the projects even after red flags were raised about financial improprieties in February 2012 when Hulme broke off his financial relationship with the Jay Peak developers, hinting in a public announcement at financial improprieties at the resort.

In January 2019, VTDigger sued over reports known as I-924 and I-924As filed by the state commerce agency to the U.S. Citizenship and Immigration Services from 2006 to 2016. USCIS terminated the Vermont EB-5 Regional Center in July 2018. VTDigger requested the I-924 and I-924As shortly afterward, which the agency denied citing the litigation hold exemption to the Vermont Public Records Act.

Attorneys representing VTDigger, Dan Richardson, of Tarrant Richardson and Gillies, Cortelyou Kenney, of the Cornell Law School First Amendment Clinic, and Timothy Cornell, of Cornell Dolan, argued that the filings between a state agency and the federal government were third party communications and the definition of a public record.

Ben Battles, solicitor general for the Vermont Attorney General’s Office, suggested and, VTDigger agreed to, a mediation process for the case.

The Vermont Attorney General’s Office produced the I-924A documents from 2011 to 2016 and related communications with USCIS in March. Missing among the records were communications between the state and the federal government prior to 2009, and the state only had a redacted copy of the 2011 document.

The Vermont Attorney General’s Office searched its “litigation hold” records database, which holds an estimated 3 million pages of documents related to the Jay Peak fraud dating back to 2006 when the state-run EB-5 program began oversight of the first projects.

In that first round, about 200 pages of documents were produced to VTDigger. Most of the communications pertaining to Leahy consisted of press releases, repeated emails, and documents unrelated to Jay Peak. The Hulme records provided by the state were identical to ones already released to VTDigger in 2015.

The news organization pushed back on the scant number of records representing six to 10 years of correspondence between the parties and asked for keyword searches of state officials, Senate staffers, and email addresses.

The second round of searches turned up one press release issued by Leahy’s staff.

VTDigger obtained communications between Hulme and Candido in April from another source, and it soon became clear that the Vermont Attorney General’s Office could not match the records from searches in its litigation hold database.

The AG’s office then released the litigation hold letters from Oct. 9, 2015, from former AG Bill Sorrell who required state employees at the Department of Financial Regulation and the commerce agency to retain all records pertaining to possible litigation regarding Jay Peak. (Requests made by VTDigger in June 2015 to the commerce agency for communication between state officials and Jay Peak were ignored. Repeated attempts to obtain documents resulted in the production of 30 pages of records later that year. In April 2016, after the SEC filed charges, the state followed with its own lawsuit against Ariel Quiros and Bill Stenger.)

The missing documents obtained by VTDigger became a bone of contention. The AG’s office insisted that the state had thoroughly searched the litigation hold database. VTDigger asked the state also search the Agency of Digital Services archives and any existing hard drives in order to ensure no documents had been intentionally destroyed.

The Vermont Attorney General’s Office rejected the suggestion that the records had been “impermissibly destroyed” and said “non-substantive” records were not retained indefinitely.

In the subsequent weeks, VTDigger obtained another 20 pages of records between Hulme and Candido that should have been produced by the state.

At that point, the AG’s office asked Competitive Computing, a private firm, to search for records in the Agency of Digital Services archives. The agency found an external hard drive with Candido’s emails and that of other commerce agency employees. A few more records between Candido and Hulme were released to VTDigger.

Competitive Computing and the Vermont Attorney General’s Office held a meeting in July to discuss a disturbing revelation: Four months of Candido’s email communications were missing. A 2008 communication from the state to USCIS also appears to have gone walkabout.

In a report submitted to the AG’s office, Dale Azaria, the commerce agency general counsel, suggested that the state probe the matter further.

“Candido followed a common habit of many users at the time to move email data of the email servers into PST files, likely to manage email storage quota limits,” Azaria wrote.

“It is possible and even likely there may be other email data in similar ACCD archives. Knowing this is possible, it is recommended to investigate this source further in an effort to locate the maximum information possible,” she wrote.