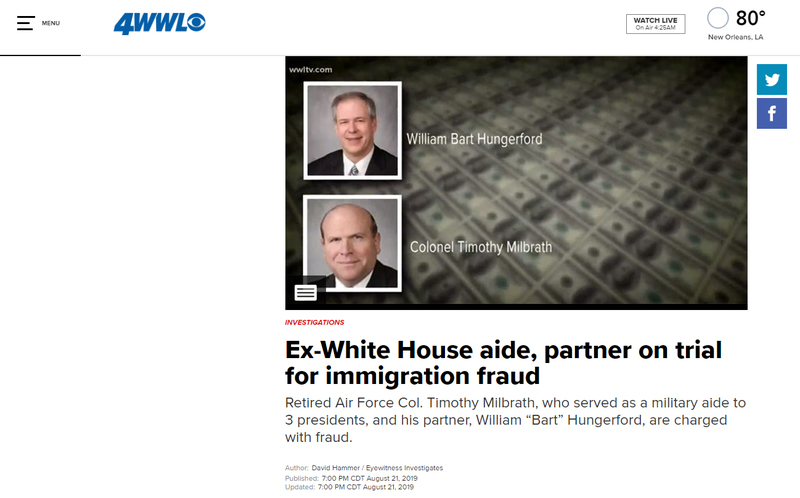 Retired Air Force Col. Timothy Milbrath, who served as a military aide to 3 presidents, and his partner, William “Bart” Hungerford, are charged with fraud.

A former White House military aide and his business partner are on trial in federal court, accused of pocketing millions of dollars intended for creating jobs in New Orleans after Hurricane Katrina.

Their company, NobleOutReach LLC, got an exclusive deal with former New Orleans Mayor Ray Nagin to run a regional center under a federal immigration program called the EB-5 visa program. That allowed them to collect $15.5 million from 31 foreign investors who were told they could get permanent green cards under the EB-5 program if their money led to the creation of 10 jobs each.

A WWL-TV investigation in 2013 exposed allegations from several of the investors that Milbrath and Hungerford had used a series of out-of-state companies to hide the money that should have gone to the job-creation projects in New Orleans and funneled it to themselves and their wives.

The two Maryland men promised to build a hotel and conference center in Algiers as their primary job-creating project. They broke ground on the project with fanfare and a news conference in 2010. But almost nine years later, the lot on Gen. de Gaulle Drive is still vacant.

Investors from the United Kingdom, Jamaica, China and elsewhere – who had invested $500,000 each in the Algiers project and others promised by Milbrath and Hungerford – were denied permanent U.S. resident status because the jobs never materialized.

But some of the money Milbrath and Hungerford put in the fund did create jobs in New Orleans. Michael Doyle, a chef who opened Maurepas Foods in the Bywater neighborhood, said he hired 32 people with money he received from the investment fund. Additional jobs were created at three PJs coffee houses and Rita's Tequila House on Bourbon Street.

But the U.S. Citizenship and Immigration Service later decided to only count jobs at the Algiers hotel and conference center. Milbrath and Hungerford put $4 million into that project before it fell apart, court records show.

Milbrath and Hungerford touted their investment fund for New Orleans as uniquely positioned to succeed. WWL-TV obtained a 2007 email solicitation Milbrath sent to a potential investor. In it, Milbrath claims the New Orleans Regional Center offers investors an “opportunity of a lifetime” with multiple development projects to reduce their overall risk.

“This is unique and diversifies the risk,” Milbrath wrote. “We believe it is the most successful model and process for operating a Regional Center and expediting the green card process.”

Milbrath and Hungerford were indicted by a federal grand jury in May 2018. The trial began this week in front of newly appointed U.S. District Judge Greg Guidry. Federal prosecutors told jurors they plan to call accountants and other witnesses to “follow the money” and show how Milbrath and Hungerford used shell companies to pay themselves and their wives, at the expense of New Orleans’ Katrina recovery, The Times-Picayune | New Orleans Advocate reported.

Tuesday and Wednesday brought testimony from a British investor and another from Jamaica, both of whom said they were promised big returns on their investments and green cards but ended up with neither.

But Milbrath and Hungerford’s defense attorney, Eddie Castaing, told jurors there was no fraud. He said his clients’ efforts to build the hotel and conference center simply failed, and investors knew there was a risk that could happen and there was no guarantee they would receive permanent U.S. residency.

What's more, Castaing questioned the investors about the management and service fees they agreed to pay when they invested, suggesting the salaries Milbrath, Hungerford and their wives collected came from the money they were allowed to keep, not from funds that should have gone into supporting local businesses.