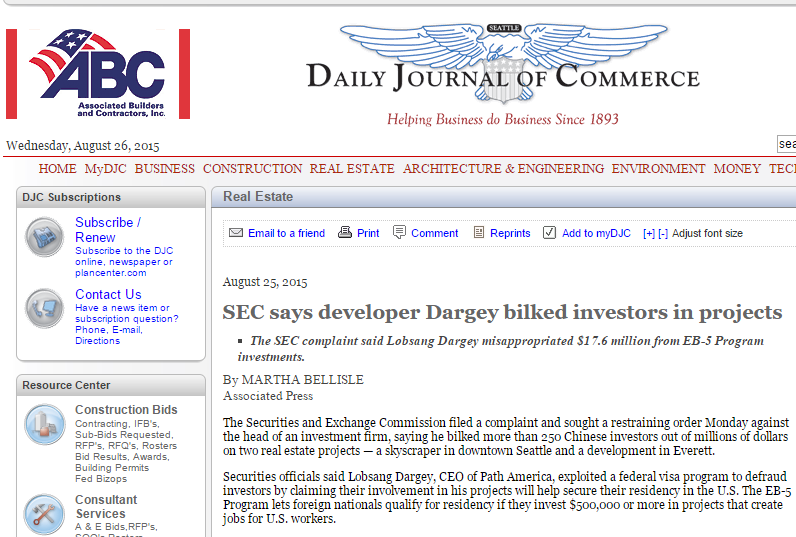 The Securities and Exchange Commission filed a complaint and sought a restraining order Monday against the head of an investment firm, saying he bilked more than 250 Chinese investors out of millions of dollars on two real estate projects — a skyscraper in downtown Seattle and a development in Everett.

Securities officials said Lobsang Dargey, CEO of Path America, exploited a federal visa program to defraud investors by claiming their involvement in his projects will help secure their residency in the U.S. The EB-5 Program lets foreign nationals qualify for residency if they invest $500,000 or more in projects that create jobs for U.S. workers.

The complaint said Dargey, a trained Tibetan monk, used that lure and a promise of returns to raise more than $125 million. Officials say he funneled funds through the Potala Tower in Seattle's Belltown neighborhood and a farmer's market in Everett and spent the money on unrelated projects and at casinos.

According to the Path America website, the company “is a one-stop shop for foreign investors who wish to live in the U.S.”

“Our mission is to increase employment and promote regional economic growth through targeted investments while also assisting nonresidents to become integrated, permanent U.S. residents,” it says.

But according to the complaint, Dargey misappropriated $17.6 million of EB-5 Program investments.

Officials said he used $2.5 million to buy a home in Bellevue and made about $350,000 in cash withdrawals from investor funds, including $200,000 withdrawn at 14 different casinos in Washington, Nevada, California and British Columbia. He also used about $14.7 million in investor funds for real estate projects under his control but not related to the EB-5 Program, the complaint said.

Securities officials sought a restraining order to freeze assets of Dargey and his companies. The order would prohibit the destruction of documents and require an accounting of all money obtained from his investors. It also seeks to force Dargey to return all funds that he sent to a Hong Kong account.