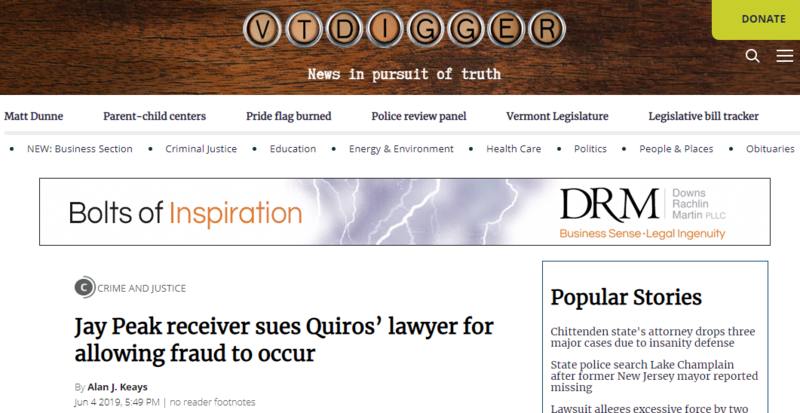 Michael Goldberg, the court-appointed receiver in the EB-5 fraud case, speaks at a Statehouse news conference in 2017. Photo by Michael Dougherty/VTDigger

Jay Peak receiver Michael Goldberg has filed a lawsuit against the former attorney for Ariel Quiros, the resort’s past owner, accusing the lawyer and his firm of allowing millions of dollars to be bilked from investors in projects in Vermont’s Northeast Kingdom headed by Quiros.

Goldberg filed the 29-page lawsuit last month in federal court in Miami, where Quiros lives and many of his businesses are based, against lawyer David Gordon of New York City and the firm where he works, Mitchell Silberberg & Knupp, LLP.

“MSK’s and Gordon’s conduct fell below the standard of care for any attorneys, let alone those holding themselves out as experts in the areas of securities and corporate law, and breached fiduciary duties owed to the Receivership Entities,” the lawsuit stated.

The lawsuit includes claims against Gordon and the firm of legal malpractice and breach of fiduciary duty.

Gordon could not immediately be reached Tuesday for comment.

Goldberg, the receiver, has effectively taken over Quiros’ assets connected with the resort since his appointment to the post in April 2016 when state and federal civil investor fraud allegations were lobbed at Quiros and his partner, Bill Stenger.

Goldberg has pursued other legal action on behalf of investors and other entities associated with Jay Peak since taking on the role of receiver in 2016, including reaching a nearly $150 million settlement with Raymond James & Associates, a financial services firm used by Quiros.

Schneider said Tuesday the specific amount he is seeking in damages from the recent lawsuit against Gordon and the MSK firm hasn’t been determined yet.

“It will be millions of dollar,” he said, later adding it is “probably” more than $10 million.

Asked what actions and Gordon and the law firm should have taken, Schneider replied, “It’s hard to say. It’s easy to say what they shouldn’t have done, which is what they did, which is absolutely nothing.”

Quiros, his former business partner, Stenger, Jay Peak’s past president and CEO, as well as two other associates, were indicted last month on federal criminal charges in connection with a project they financed through EB-5 immigrant investment funds.

Quiros and Stenger as well as Bill Kelly, described as a key advisor to Quiros, all pleaded not guilty to the charges against them. A fourth defendant in the case Jong Weon (Alex) Choi, the operator of AnC Bio Korea, remains “at large,” according to federal prosecutors.

The 14-count indictment includes allegations against the defendants of fraud and making false statements to government regarding a failed biomedical research facility, AnC Bio Vermont, proposed for Newport that the federal regulators had earlier termed “nearly a complete fraud.”

More than three years earlier, in April 2016, the state and the Securities and Exchange Commission brought lawsuits against Quiros and Stegner alleging the two men missued $200 million of $350 million raised through the EB-5 program.

The money was raised over an eight-year span to fund massive redevelopment projects, included hotels and waterparks, at Jay Peak, as well as the Northeast Kingdom towns of Burke and Newport.

Two weeks before the criminal indictment was released last month, Goldberg filed his lawsuit against Gordon and the MSK law firm.

Gordon had represented Quiros and other entities connected to Quiros from mid-2013 through March 2017, and according to the lawsuit had racked up along with “local counsel” nearly $3 million in legal bills.

Quiros fired Gordon in March 2017 as well as other members of his legal team at that time, alleging they kept him in the dark and overcharged him.

According to the Goldberg’s lawsuit against Gordon, shortly after signing up to serve as counsel, Gordon and the firm learned that “Quiros had directed the commingling of tens of millions in investor funds among the projects’ various phases and entities in an effort to cover construction shortfalls.”

In addition, the lawsuit alleged, “MSK also learned that Quiros had financed his purchase of the Jay Peak resort in 2008 by diverting millions of dollars of EB-5 investor funds held by certain Receivership Entities.”

According to the lawsuit, Gordon and MSK “held themselves out” as counsel for all the receivership entities.

Those receivership entities included other EB-5 financed projects that foreign investors had each invested $500,000 in the hopes of obtaining green cards if job creation requirements were met.

“Defendants failed to advise the Receivership Entities that violations of the private placement memorandum and securities laws were occurring,” the lawsuit stated.

According to the lawsuit, MSK and Gordon learned about the misuse of funds related to AnC Bio Vermont “no later” than May 2014, when Quiros testified during an “investigative session” conducted by the U.S. Securities and Exchange Commission.

At that deposition, the lawsuit stated, Quiros testified about transferring $18 million funds from investors in that biomedical research facility project to help cover debt from earlier projects.

Despite being aware of this action, according to the lawsuit, Gordon did not warn the “decision makers” associated with the other entities what Quiros was doing.

Gordon, the lawsuit stated, was looking out only for the Quiros, and not the interest of others, including investors in other the projects Quiros headed.

“Quiros testified that ‘once [an individual] invests, it is now my money. It is totally my money,’” the lawsuit stated. Quiros further testified that once investor funds were transferred to a Quiros-controlled account, he could ‘do whatever I want’ with them.”

The lawsuit added, “MSK and Gordon never counseled Quiros or the Receivership Entities that Quiros’ views ran contrary to the private placement memoranda and, when acted upon, resulted in violations of securities laws.”

Gordon, MSK, and Goldberg entered into a “tolling agreement” that stayed the statute of limitation on the receiver’s claims from Feb. 9, 2017, to May 9 of this year.

The lawsuit was filed on May 8.