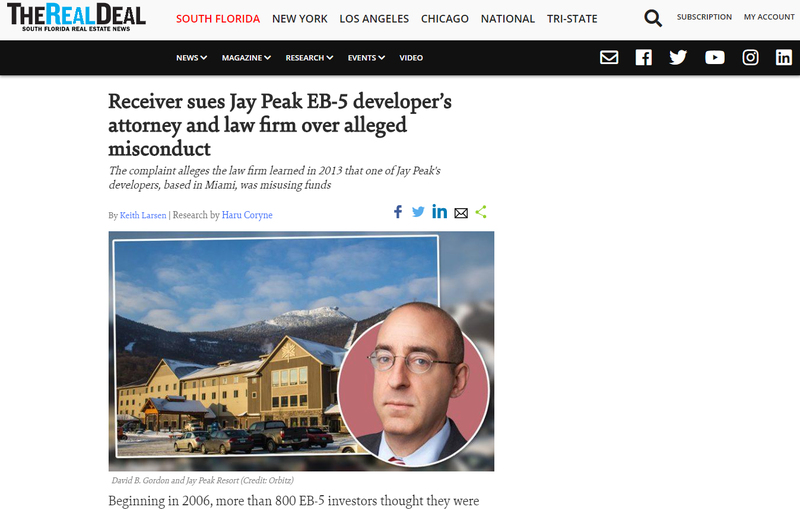 The complaint alleges the law firm learned in 2013 that one of Jay Peak's developers, based in Miami, was misusing funds

Beginning in 2006, more than 800 EB-5 investors thought they were investing in a promising new ski resort in Northern Vermont.

But years after investors started putting their money into the Jay Peak project, the Securities and Exchange Commission in 2016 alleged that the two developers ran a “Ponzi-like scheme.” It is considered the largest alleged EB-5 fraud to date.

Now the court-appointed receiver for the project, Michael Goldberg, is suing the developers’ and the receivership entities’ former law firm, Mitchell Silberberg & Knupp LLP and attorney, David Gordon, in federal court in Miami. Goldberg alleges legal malpractice and that the law firm was negligent in its fiduciary duties.

Jeff Schneider and Jason Kellogg of the Miami-based law firm Levine Kellogg Lehman Schneider and Grossman LLP are representing the receiver in the lawsuit filed last week. Schneider said damages are in the tens of millions of dollars.

Mitchell Silberberg & Knupp and Gordon did not respond to requests for comment.

The lawsuit alleges that the law firm and Gordon learned in 2013 that one of the developers of Jay Peak, Miami businessman Ariel Quiros, had misused some of the project’s funds to cover “construction shortfalls in the project.”

The law firm also allegedly learned that Quiros illegally financed the purchase of the resort in 2008 using EB-5 investor funds, according to the suit. It further alleges that the firm learned in 2013 that money was being “commingled” or that funds were being used for earlier phases of the project, and did not advise investors in the receivership entities, including Jay Peak co-developer Bill Stenger.

The suit alleges that the law firm acted in the best interest of Quiros but not of its other clients. More than a dozen receivership entities linked to Jay Peak were not counseled by the law firm or Gordon that securities violations were being committed by Quiros, according to the suit. Still, Gordon and the law firm continued to represent the receivership entities. This allowed investment into the project to continue, the suit states.

In May 2014, the law firm and Gordon represented Quiros at an SEC investigative session, and Quiros testified that $18.2 million of investor money earmarked to pay a South Korean firm for construction was instead transferred to a Raymond James account to pay down margin debt incurred in earlier phases, according to the suit. This was never mentioned to the receivership entities, the suit alleges.

EB-5 was once a popular federal program that allowed foreign investors the opportunity to get a green card if they invested at least $500,000 and the project created a least 10 jobs. In recent years, however, notable alleged fraud cases such as the Jay Peak case as well as a backlog of Chinese visas have slowed demand for the program.