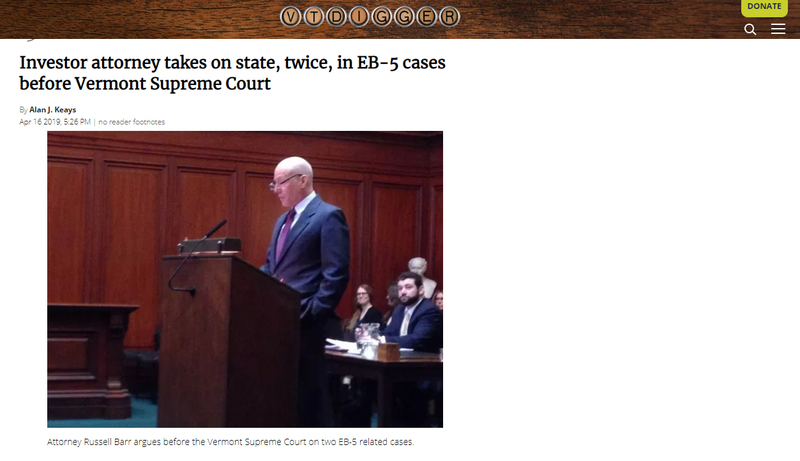 Jay Peak investors should be allowed to sue the state and officials responsible for running the Vermont EB-5 Regional Center for permitting fraud to occur under their watch, an attorney argued Tuesday before the Vermont Supreme Court.

Russell Barr, a Stowe attorney representing a handful of immigrant investors in EB-5 funded Jay Peak projects, made that contention as part of a double-header of cases that pitted him against the state before the high court.

No decisions were made in either cases.

Instead, the justices took both matters under advisement and are expected to issue written rulings in the coming months.

Barr told the five members of the state’s highest court Tuesday that under a federal program, EB-5 regional centers, like the one in Vermont, must promote economic growth.

“Is your theory really that in order to do that effectively, you have to oversee the projects within your purview to ensure that no one is pilfering investor money,” Justice Beth Robinson asked him.

“An integral part of promoting economic growth,” the attorney said as he opened his arguments, “you can’t misappropriate the money, you can’t steal the money.”

Benjamin Battles, the solicitor general for the Vermont Attorney General’s Office, contended in his arguments to the high court that the investors’ dispute is with the Jay Peak developers, Ariel Quiros and Bill Stenger, not with the state.

Federal authorities did not impose specific obligations on regional centers to administer, oversee or manage EB-5 projects, the state has contended.

“The Jay Peak projects had an obligations to provide and to sort of keep their own shop clean,” Battles said. “And that was the obligation that was breached here.”

Justice Marilyn Skoglund asked Battles what then was the purpose of the $1,500 to $3,000 in fees paid by each EB-5 investor to the regional center.

Battles said that money was used by the regional center to promote economic development in Vermont.

“That’s what VRC was doing, to drum up investment in the Northeast Kingdom and other parts of the state,” he said. “That’s what the fees were financing, those types of things. It was not financing securities regulations.”

Barr is appealing to the Vermont Supreme Court an April 2018 ruling by Lamoille County Judge Thomas Carlson who dismissed the action brought against past and present state officials and two state agencies for their role in the state-run Vermont EB-5 Regional Center.

Carlson, in the dismissing the case, cited the state’s absolute immunity from third party civil claims. The Vermont attorney general’s office argued that state agencies, officials and employees had acted in “good faith.”

Barr has contended that state officials were negligent, and even complicit, in an alleged Ponzi scheme overseen by Jay Peak developers Quiros, the former owner of the resort, and Stenger, the former CEO.

And knowing that the Jay Peak projects were being overseen by a state-run regional center, he added, provided the EB-5 investors with the comfort needed to each put up a $500,000 investment, plus administrative fees of up to $50,000.

In total, Stenger and Quiros solicited more than $450 million in EB-5 monies from more than 800 foreign investors through the state-run investment program, which the state commerce agency managed and oversaw over the eight-year span of the Northeast Kingdom projects.

The Vermont Department of Financial Regulation, which regulates securities, took over the oversight of the Jay Peak developments and other EB-5 projects in January 2015.

In separate lawsuits brought by state and federal regulators, the two developers were accused of misusing $200 million of the money they raised through the EB-5 program. The SEC said Quiros siphoned off $50 million himself to pay for personal items, such as a New York luxury condo.

Throughout his arguments Tuesday before the Vermont Supreme Court seeking to revive his case against the state, Barr cited a notice by the U.S. Citizenship and Immigration Services terminating the center.

As part of the notice, USCIS issued a scathing review last summer of the state’s role in managing the facility.

That notice of termination was issued after the lower court judge had dismissed Barr’s lawsuit.

In its review, the federal agency took the state to task for its lack oversight and misrepresentations regarding the series of projects headed by Quiros and Stenger.

Michael Goldberg, the court-appointed receiver in the EB-5 fraud case, speaks at a Statehouse news conference in 2017.

The state is currently appealing the terminating notice, seeking to “wind down” the center’s operation so it can continue to process the paperwork needed for investors who have already put money into EB-5-funded projects rather than immediately shuttering the facility.

The defendants in Barr’s lawsuit include the state Agency of Commerce and Community Development and state officials who had a hand in running and overseeing the regional center.

Barr also took issue Tuesday with the sovereign immunity claim raised by the state, arguing that Vermont was one of less than a handful of 1,200 EB-5 regional centers across the country that was government run.

Clearly, he said, the state was engaging in a private-sector enterprise where such a defense wouldn’t apply.

“Let’s just think about a private regional center failing to monitor the investment activity … allowing money to misappropriate,” he said to the justices. “Is there a cause of action against those regional centers? Of course.”

In a separate case argued by the high court Tuesday, Barr asked the justices to allow him to intervene in a civil enforcement lawsuit brought three years ago by state regulators against Quiros and Stenger.

Barr claims in his appeal that he and his firm are in a better position than the state to represent the investors who say they were defrauded by Quiros and his former business partner, Stenger.

The Stowe attorney submitted the filing to intervene in the case shortly before the state announced last summer a $2.1 million settlement with Quiros and Stenger, with Quiros paying the bulk of that amount, $2 million, by agreeing to turn over several properties to the state.

The state settlement followed a resolution of the federal civil case brought by the U.S. Securities and Exchange against both developers.

In that case, Quiros agreed to surrender more than $80 million in property, including Jay Peak and Burke Mountain ski resorts, to the federal government. Stenger agreed to a $75,000 penalty.

In both the state and federal settlements, Stenger and Quiros both do not admit or deny wrongdoing.

The state settlement money will go to the Agency of Commerce and Community Development to fund economic development initiatives in Newport, a Northeast Kingdom community home to two failed projects headed by Quiros and Stenger.

That prompted Barr to appeal that ruling to the Vermont Supreme Court, and again the state objected, asking the high court to dismiss Barr’s challenge.

Barr, in his argument Tuesday before the high court, said despite his clients being the ones defrauded by the developers, the state settlement provides them with no money back.

“Do we have an interest? Yes,” he said. “We wanted a spot at the table, as simple as that.”

Barr then added, “If there wasn’t the stealing of my clients funds there would be no enforcement action.”

A large hole has been left in Newport’s downtown after buildings were razed for a failed EB-5 funded project by developers Bill Stenger and Ariel Quiros.

Assistant Attorney General Kate Gallagher, representing the state, said the investors had other avenues to pursue their claims other than the state case.

She said the court-appointed receiver now overseeing the properties at the center of the fraud cases is looking out for the interests of the investors.

Michael Goldberg, that receiver, she said, has already reached a $150 million settlement with Raymond James & Associates, a financial services firm used by Quiros, with money from that resolution going to investors.

Also, the more than $80 million settlement with Quiros in the SEC has been transferred to the receiver to help investors recoup losses, Gallagher added.

“Let’s just be clear, the state is protecting the public interest,” she told the high court, adding that the city of Newport was particularly harmed as a result of the fraud case.

The Northeast Kingdom community was home to two projects by the developers that never got off the ground.

One of those projects, a proposed biomedical facility, was deemed “nearly a complete fraud” by the SEC.

The other left a large hole in the city’s downtown after buildings were razed for an office project that stalled once state and federal authorities put the brakes on the development in April 2016.

“What we were looking to as part of the settlement was to give some funds to the city of Newport, which has a gaping hole the ground in its downtown as a result of the fraud,” she said.

“We think it’s in the public interest to do that,” Gallagher added. “We think our interest as a state is not simply the interest of the investors.”

Barr said at least a portion of that $2 million state settlement should have gone to those who lost money in the fraud.

“The money that has been collected, should be given in some part to the investors,” he said. “We would not be here today if there were some amount given to investors.”