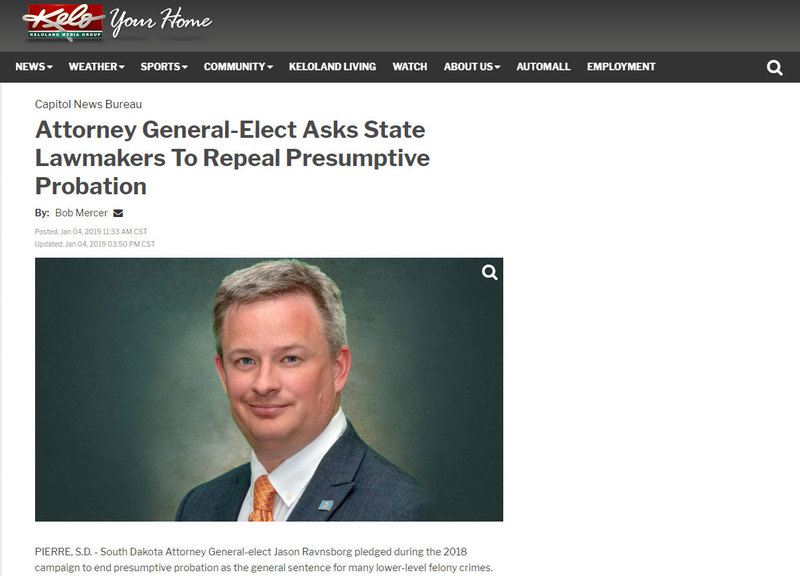 South Dakota Attorney General-elect Jason Ravnsborg pledged during the 2018 campaign to end presumptive probation as the general sentence for many lower-level felony crimes.

Now, as he prepares to take office Saturday, he's trying to deliver on that promise.

On Friday morning, the Legislative Research Council posted on its website a proposal to eliminate one of many provisions in a broad measure that lawmakers passed six years ago.

Senate Bill 19 would reverse Section 53 of the 2013 law that Gov. Dennis Daugaard and state Supreme Court Chief Justice David Gilbertson proposed on behalf of many in the legal community.

The lengthy bill received nearly unanimous approval from legislators in 2013, passing the Senate 31-2 and the House of Representatives 63-7.

The presumptive probation section said circuit judges should use it rather than sentence offenders to prison for many Class 6 and Class 5 felonies.

Those classes of crimes happen to be where many of South Dakota's anti-corruption laws are.

Holding down prison inmate numbers was one reason for SB 70.  One of those who testified as a supporter six years ago was the now-outgoing state attorney general, Marty Jackley.

Jackley would later offer a plea deal to Joop Bollen of Aberdeen in the EB-5 immigrant-visa corruption case that resulted in no prison time after Bollen said he was guilty.

And Jackley offered to let Daniel Guericke of White Lake plead guilty to one count last fall in the GEAR UP corruption case. Guericke didn't serve any time in prison either.

Now Ravnsborg, who faces a rising tide of crimes committed by methamphetamine addicts and other drug abusers, wants presumptive probation taken off the books as the law governing circuit judges in many cases.

Jackley said Friday: "As I transition out I want to be respectful of the new attorney general and feel it's best for him to address session."

Justice Gilbertson said Friday he was aware of SB 19 but declined to go any farther.

"I have no comment as the Supreme Court at some point might be called upon to interpret the meaning of the bill or its constitutionality as part of a potential appeal. Under our judicial canons we save our comments for potential appeals," Gilbertson said.

As of 11:00 a.m., Ravnsborg hadn't yet responded to several messages left for him Friday morning. The 2019 legislative session opens at noon Tuesday.