The owner of the iconic Tribune Tower and several other downtown Oakland office buildings is facing a lawsuit from a business partner accusing him of diverting funds from their enterprise to help amass his growing real estate portfolio.

The lawsuit, filed last month in Alameda County Superior Court, marks the second time in the past year that Thomas Henderson and his sons, Matthew and Michael, have been sued by an estranged partner.

Working with his two sons, Henderson, 66, has made a name for himself in recent years for his participation in the federal EB-5 program in which wealthy foreigners, primarily from China, bankroll projects that create domestic jobs in exchange for permanent residency in the U.S.

At issue is their biggest EB-5 venture, a call center company called CallSocket, which operates out of several floors in the Tribune Tower.

In court papers, Allan Young claims that he owns an equal share of the business but has been denied access to accounting reports and tax filings.

Young alleged that the Hendersons had "secretly diverted investment assets and funds" from CallSocket into separate bank accounts, and used CallSocket funds "to purchase or finance" other business ventures, including the acquisition of the Tribune Tower, according to court papers.

He also alleged that the Hendersons have misled Chinese investors by placing promotional materials on Chinese language websites that said CallSocket had contracts with "high profile clients such as Blue Cross/Blue Shield." 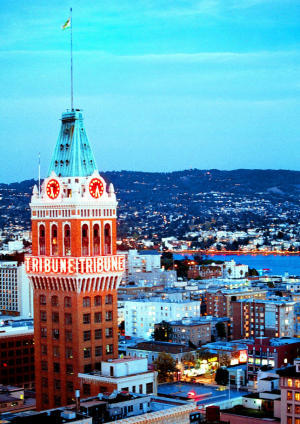 The Oakland Tribune tower, as seen from the Oakland Marriott Hotel roof, is bathed by the light of the setting sun. In the background are Lake Merritt and the Oakland hills.

Young and his attorney, Jonathan Levine, of the firm Pritzker Levine, declined to comment. They are seeking access to CallSocket's financial statements and an injunction preventing the Hendersons from taking money out of the company.

Tom Henderson's attorney, Leeds Disston, said he was still researching the case, but he recalled Young having been granted access to accounting records.

"He made a request for information that was passed on to an accountant who put together some financial information," Disston said. "But I don't think he ever picked it up."

The federal EB-5 program gained popularity during the recent Great Recession as traditional investment resources dried up. Participating foreign investors receive a temporary green card for themselves and their family members in return for a $500,000 investment. They receive permanent residence if after two years their investments resulted in 10 permanent jobs.

The Hendersons' EB-5 activity is through their company, The San Francisco Regional Center, which is authorized by the U.S. Citizenship and Immigration Services for projects in San Francisco, Alameda and Contra Costa counties.

Between 2011 and 2014, the Hendersons and Young formed three CallSocket limited liability corporations that raised money in China for the call centers, according to court papers. Around the same time, public records show that Henderson registered several additional CallSocket limited partnerships and limited liability companies, some of which were used to purchase the Tribune Tower at 409 13th Street, the I. Magnin Building at 2001 Broadway, the Dufwin Theatre at 517 17th St., and the Community Bank of the East Bay Building at 1740 Broadway.

The Hendersons recently settled a lawsuit filed by Oakland-based chef Chris Pastena, who had gone into business with Henderson on two restaurants: The Tribune Tavern inside the Tribune Tower, and Lungomare at Jack London Square.

In court papers, Pastena, who owns Chop Bar, alleged that the Hendersons "refused to share profit and loss statements with (him)" and "opened undisclosed bank accounts in the name of the restaurants ... to which Pastena had no access."

The details of the settlement are confidential.