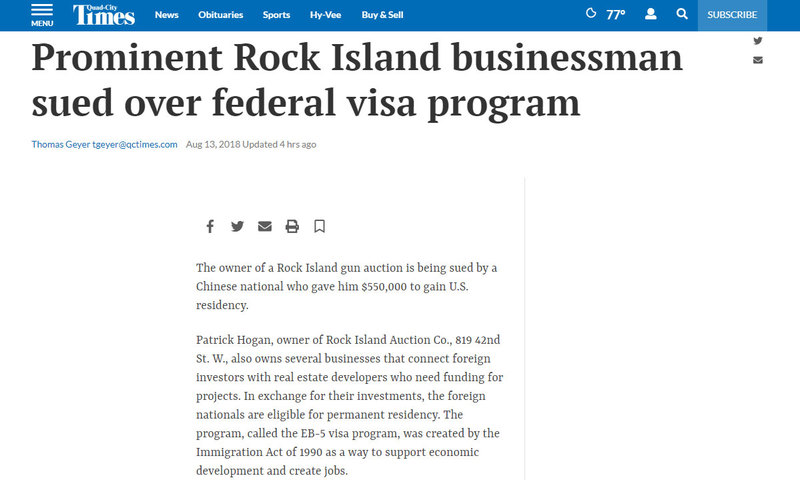 The owner of a Rock Island gun auction is being sued by a Chinese national who gave him $550,000 to gain U.S. residency.

Patrick Hogan, owner of Rock Island Auction Co., 819 42nd St. W., also owns several businesses that connect foreign investors with real estate developers who need funding for projects. In exchange for their investments, the foreign nationals are eligible for permanent residency. The program, called the EB-5 visa program, was created by the Immigration Act of 1990 as a way to support economic development and create jobs.

Kewu Zhan was one of 900 people who gave Hogan $550,000 each, according to Zahn's lawyer, Douglas Litowitz. That $450 million fund was used by a developer to renovate Century Plaza, in Los Angeles, according to the lawsuit.

But Zhan claims Hogan and the businesses, which operate as CMB Regional Centers and NK Immigration Services, misrepresented the terms of the deal, including the length of time it would take to get residency. Zhan alleges he was not aware the investment was likely to lose money or gain a maximum of 0.8 percent, while Hogan draws a $50,000 administrative fee, 1 percent management fee, and earns 0.75 percent from the developer and associated other fees. In addition, the suit alleges the minimum investment time was six years, but Hogan and others were aware of immigration backlogs that mean it will be closer to 15 years before investors will gain residency.

Zhan, 60, could die while his investment is tied up, the lawsuit contends.

He is asking the court for his money back.

In a telephone interview, Hogan said the lawsuit makes wild accusations that show a misunderstanding of how the EB-5 program works. His company, CMB, works with 5,400 investors in 93 countries, including the one involved in the Century Plaza development, he said. Investors go through steps, he said, that include conditional residency, then residency, provided the investor can show he sustained his investment and created jobs.

The investment is six years, Hogan said, but an explosion of investors from all over the world are using the program, which has slowed the visa process. Someone who entered the program today, he said, would probably wait 15 years for residency.

Zhan will likely have his green card in less than 10 years from the time of his initial investment, which was three years ago.

Hogan said Zhan's lawyer is portraying him as unable to understand English, which he contends is not the case.

“These are smart, sophisticated people,” Hogan said. “They are articulate. They want to be in the U.S. for themselves and for their children and for opportunity. If they can’t read English they would have had a translator for themselves.”

Hogan said he gave Zhan the opportunity to get out of the deal, provided he found another investor, but he rejected that idea.

If investors could remove their money at will, U.S. Customs and Immigration Service would likely deny the requests, he contended.

“I can’t just give him his money back without jeopardizing all the investors’ interests,” Hogan said. “I have a fiduciary responsibility.”