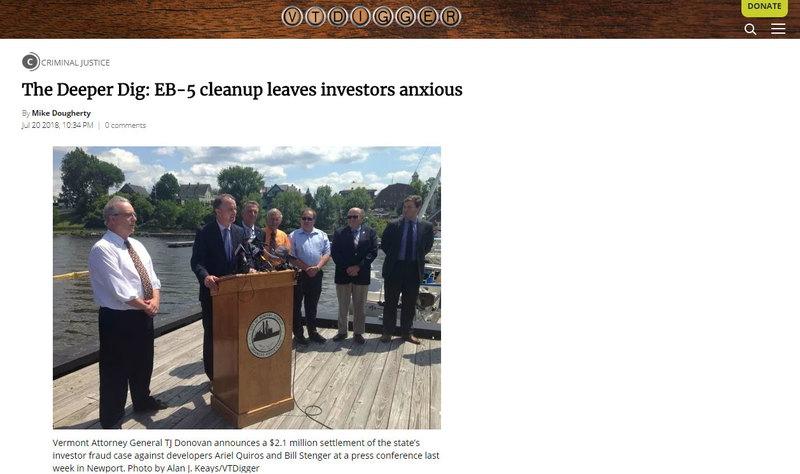 The Deeper Dig is a weekly podcast from the VTDigger newsroom. Listen below, and subscribe on Apple Podcasts, Google Play, Spotify or anywhere you listen to podcasts.

The two latest steps in the fallout from Vermont’s EB-5 scandal have been a mixed bag for the state.

Last week, the federal government notified officials that the Vermont EB-5 Regional Center would be immediately shut down, a direct result of the state’s failure to stop a massive fraud scheme. Days later, the state announced a civil settlement against the developers at the center of the fraud.

While the settlement provides some restitution for the city of Newport, which is still recovering from the botched development, the federal notice to end the EB-5 program was a major blow. With multiple EB-5 projects still underway, hundreds of investors could be left in limbo.

The state is appealing the U.S. Customs and Immigration Services decision. But Russell Barr, a Stowe attorney representing a group of investors in litigation against the state, says fighting the shutdown is a lost cause.

“They did not take the appropriate approach with USCIS from day one. They did not sit down with them and say, ‘we made a mistake,'” Barr says. “And that has created a whole host of issues for the investors.”

Barr says the state’s settlement also provides no relief for those investors, despite the fact that the suit sought full restitution for investors when it was first filed. “We all know now that not one penny of that settlement went to our clients.”

On this week’s podcast, Barr describes the resolution investors want to see. Commissioner of Financial Regulation Mike Pieciak talks about making the state’s case to the federal government. Assistant Attorney General Kate Gallagher, who led the state’s case against the Jay Peak developers, discusses what the recent civil settlement means for the state. And VTDigger’s Alan Keays talks about the open questions around the state’s accountability.