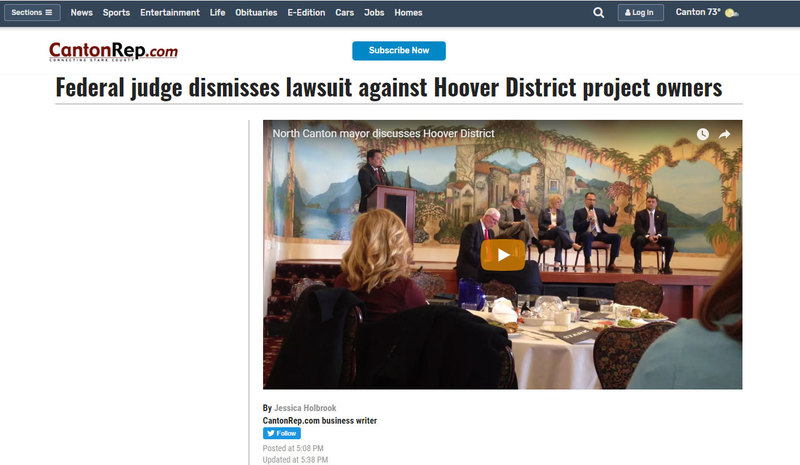 Judge Lioi retained jurisdiction in the case to enforce a settlement reached in January.

NORTH CANTON A federal lawsuit against the developers of the Hoover District project was dismissed this week.

Both parties asked Judge Sara Lioi of the United States District Court for the Northern District of Ohio to dismiss the case without prejudice. They also asked that the court retain jurisdiction to enforce the terms of a settlement agreement reached in January.

Dismissing a case without prejudice means that the case could be re-filed in the future.

An affiliate of CMB Regional Centers filed the suit in late 2016. It named Maple Street Commerce, the owners of the Hoover District, as well as a group of individual investors.

CMB argued that Maple Street was in default of a $36 million loan by misusing federal EB-5 funds intended for the Hoover project.

Maple Street denied those claims or any wrongdoing.

CMB is an investment firm that connects developers with EB-5 funding. The EB-5 Immigrant Investor Visa Program, administered by the U.S. Citizenship and Immigration Services, allows foreign investors to obtain a green card by investing in a U.S. business that will create or retain at least 10 jobs.

The parties reached a settlement agreement in January.

As part of the agreement, Maple Street and Lichter had 60 days to secure an unaffiliated commercial loan to pay for a portion of the settlement followed by an additional 90 days to close the loan and obtain the funds.

Maple Street bought the massive former headquarters of the Hoover Co. in 2007. It has since revamped much of the complex, turning it into office and industrial space.

But the 400,000 square-foot western portion of the campus, which faces Main Street across from North Canton City Hall, has remained empty.

In 2013, Maple Street announced a $50 million project to turn the factory into a mixed-use development with apartments, shops and restaurants. The project was originally supposed be completed in late 2015, but that date was pushed back to 2016, then 2017, and most recently to the end this year or early next year.

Lichter did not immediately return calls for comment Thursday.