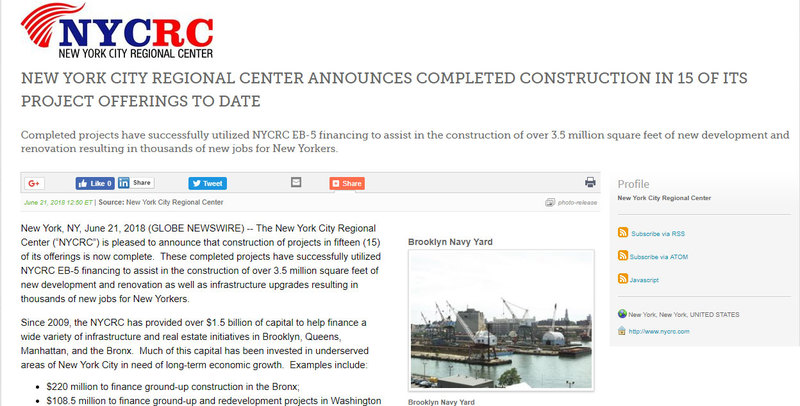 Completed projects have successfully utilized NYCRC EB-5 financing to assist in the construction of over 3.5 million square feet of new development and renovation resulting in thousands of new jobs for New Yorkers.

The New York City Regional Center (“NYCRC”) is pleased to announce that construction of projects in fifteen (15) of its offerings is now complete. These completed projects have successfully utilized NYCRC EB-5 financing to assist in the construction of over 3.5 million square feet of new development and renovation as well as infrastructure upgrades resulting in thousands of new jobs for New Yorkers.

Since 2009, the NYCRC has provided over $1.5 billion of capital to help finance a wide variety of infrastructure and real estate initiatives in Brooklyn, Queens, Manhattan, and the Bronx. Much of this capital has been invested in underserved areas of New York City in need of long-term economic growth.  Examples include:

construction of LinkNYC, the public-private initiative that is bringing the nation's largest and fastest public Wi-Fi

The fifteen completed projects in NYCRC offerings have put EB-5 capital to work across a broad spectrum of infrastructure and real estate initiatives in New York City resulting in millions of square feet of development and significant job creation. Examples of completed projects utilizing EB-5 capital from NYCRC-managed funds include the following:

“We are excited to announce that project construction in fifteen NYCRC offerings is now complete,” said Paul Levinsohn, NYCRC Managing Principal. “The job creation resulting from millions of square feet of new development and major infrastructure improvements is significant and we are happy to have helped finance this effort.”

Over the past two years, the United States Department of Treasury has awarded a total of $65 million in New Market Tax Credit allocations to a NYCRC-managed entity. To receive this allocation, the NYCRC was required to demonstrate a mission and long-term track record of investment in low income communities.

“We are pleased that the NYCRC has been recognized by the U.S. Department of Treasury as an organization with a proven track record of providing capital to areas in need of investment,” said George L. Olsen, NYCRC Managing Principal.

In addition to helping fuel economic development throughout New York City, the NYCRC has enabled over 4,650 individuals (EB-5 investors and immediate family members) participating in its offerings to become permanent residents of the United States through the EB-5 Immigrant Investor Program.  A total of 1,595 I-829 petition approvals in NYCRC offerings to date have enabled 4,652 individuals to secure permanent green cards. I-829 petition approvals have now been issued in the NYCRC’s first nine project offerings.

“Achieving over 4,650 permanent green cards and close to 1,600 I-829 approvals is the result of years of hard work on behalf of our investor families,” added Mr. Levinsohn. “We know that EB-5 investors and their families put their trust in our ability to help them achieve permanent residency in the United States.”