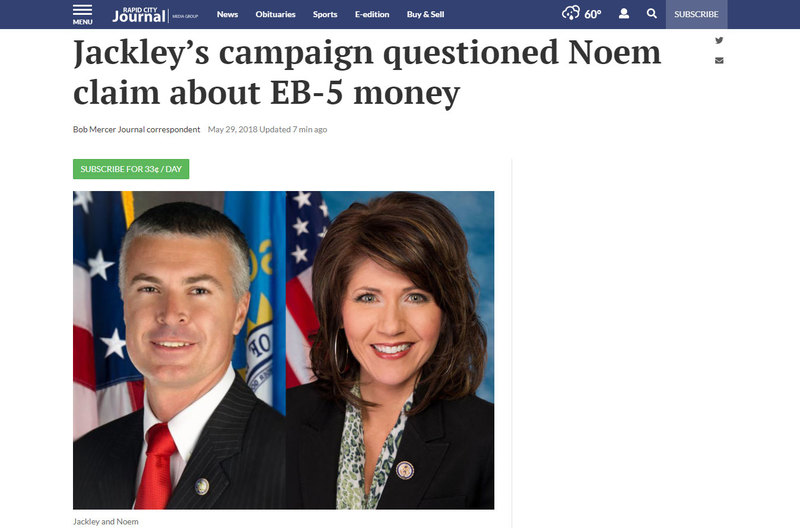 An official for state Attorney General Marty Jackley’s campaign has questioned the source for a claim in a current broadcast ad criticizing Jackley.

Jackley and Noem are competing for the Republican nomination for South Dakota governor in the June 5 primary election. The winner faces Senate Democratic leader Billie Sutton in the Nov. 6 election.

The EB-5 program expanded under then-Gov. Mike Rounds and was suspended under current Gov. Dennis Daugaard. Rounds said he didn’t know about wrongdoing.

At issue is $5 million the Noem ad said was missing from accounts managed by SDRC Inc., the private company that former state employee Joop Bollen created to manage EB-5 investments under a state government contract.

The $5 million was among allegations against SDRC about money and behavior. Bollen pleaded guilty to one felony in 2017 and didn’t serve any time in state prison after reaching a pre-plea agreement with Jackley’s office.

Noem campaign manager Justin Brasell said Tuesday the source for the $5 million reference was a news story published around the state on the weekend of Oct. 18, 2015. It quoted details from an 18-page document from U.S. Citizenship and Immigration Services seeking a shutdown of state government’s EB-5 involvement.

The story wasn’t challenged at that time by anyone in or outside the EB-5 program.

Replied Brasell, “Kristi has consistently supported major reforms to EB-5, but when faced with shutting down the government, she voted to pay our troops and temporarily extend the program.”

"Three years ago, USCIS issued an intent to terminate, and certified its position to its appeals officer. The appeals officer found that USCIS had not consider all the factors and remanded it back," Venhuizen said.

"USCIS recently reissued a notice to terminate, and the state will once again be asking for consideration on appeal. It is hard to know when this will all be finalized."