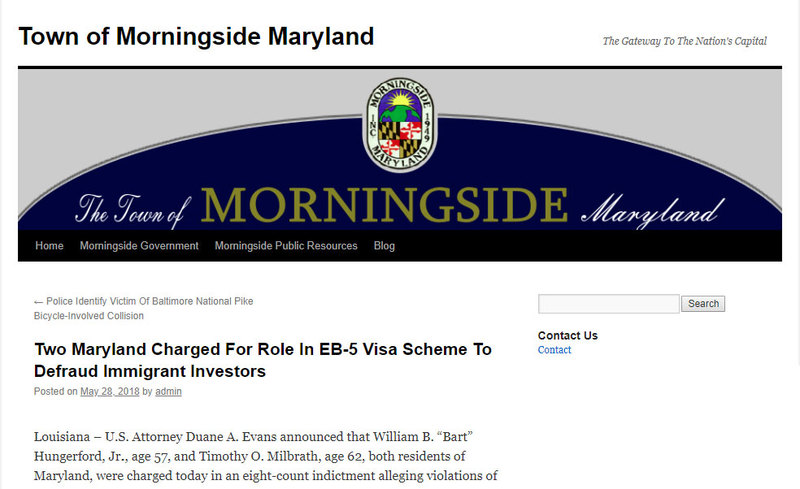 U.S. Attorney Duane A. Evans announced that William B. “Bart” Hungerford, Jr., age 57, and Timothy O. Milbrath, age 62, both residents of Maryland, were charged today in an eight-count indictment alleging violations of federal law in connection with a scheme to defraud immigrants who sought to invest money in job-creating companies in New Orleans after Hurricane Katrina.

According to the indictment, Hungerford and Milbrath conspired together to defraud immigrants who sought to apply for EB-5 visas. The visa program permits immigrants to invest a minimum of $1,000,000.00 in a United States job-creating enterprise and obtain permanent residency if, after two years, that investment created or preserved ten American jobs. The minimum investment required was lowered to $500,000.00 if the investment was made in a targeted employment area (“TEA”), defined as an area with an unemployment rate of 150% of the national average.

Hungerford and Milbrath formed a company called NobleOutReach to operate an investment fund, and they contracted with the City of New Orleans to operate a regional center in the Parish of Orleans.  Because New Orleans was a designated TEA in the years after Hurricane Katrina, immigrant investors only had to invest $500,000.00 in order to qualify under the EB-5 visa program. The indictment alleges that Hungerford and Milbrath represented to investors that their $500,000.00 investment would be used to create jobs in New Orleans and contribute to the rebuilding of the City. A total of thirty-one immigrants invested a total of $15.5 million in the defendant’s investment fund.

The indictment alleges that, instead of investing the entire $15.5 million into New Orleans-based job-creating enterprises, Hungerford and Milbrath fraudulently misappropriated investor funds for their own personal gain and to use for their personal companies. Hungerford and Milbrath are alleged to have written checks, disguised as “loans” or “loan repayments,” to themselves from investor funds, income that was in addition to their salaries. The defendants are alleged to have created multiple companies in order to obscure and conceal the path of investor funds, and they allegedly spent investor funds to purchase vacation and rental properties for their own benefit. The indictment alleges that, in the course of perpetrating the fraud, the defendants made material misrepresentations to investors, U.S. Citizenship and Immigration Services (USCIS), and the City of New Orleans.

Hungerford and Milbrath are both charged in all eight counts of the indictment returned by the grand jury. Among other charges, they are alleged to have committed conspiracy to commit wire fraud and mail fraud, and they are charged with five counts of wire fraud. Should they be convicted, each of these counts carries a maximum penalty of twenty years in prison, a $250,000.00 fine, and up to three years of supervised release.