Legal experts in the EB-5 program said Miami’s regional center to lure foreign investments in exchange for green cards could help relieve the city’s affordable housing shortage, but it’s certainly not a panacea.

The EB-5 program is a hot-button issue in Congress, as it’s set to expire on Sept. 30. The attorneys and Miami city officials who addressed a conference at City Hall on Wednesday all said they expect Congress to extend the program, although there could be significant changes.

Miami Mayor Tomás Regalado brought the attorneys together to address an audience, which including many local developers, about how they could use the city’s EB-5 regional center to build affordable housing. The mayor said affordable housing is the No. 1 issue residents contact his office about. More than 52,000 people in Miami-Dade County are on the waiting list for publicly funded affordable housing, he said. Regalado said Miami has many senior citizens who collect meager Social Security checks because they immigrated here as adults, so they didn’t generate as much taxable income as U.S.natives did over the years.

“I have gone to Washington, and we have tried to make HUD understand that Miami is different, and they don’t seem to get it,” Regalado said. “These people paid their dues. They need to be recognized as the pioneers who built the Miami we have today. Miami is not about museums and tunnels and stadiums. Miami is about the residents. These are the people who built Miami, and these are the people we need to take care of."

Mikki Canton, the managing director of Miami’s EB-5 regional center, said affordable housing projects can address the problem of young professionals who can’t afford to live in urban centers and must leave the community or live in the suburbs, which makes traffic worse. She advocated for the creation of mixed-use communities with housing for different income levels, and senior housing near medical and educational facilities.

Developers need to realize that the affordable housing component must be part of an overall mix that’s financially viable because EB-5 investors still want to recover their money, Canton said. They must also appeal to conventional lenders, as a project solely funded by EB-5 probably isn’t viable, she said.
“We have seen many wonderful projects that haven’t been funded,” Canton said. “Projects may have a noble focus, but if they are not marketable, they will not do it."

Miami’s regional center covers the entire tri-county area, so it could fund housing projects outside the city, as well. It oversees the creation of a commercial entity funded by EB-5 investors and allows that entity to make a loan to a developer. The developer must demonstrate that 10 jobs are created for each investor, with a minimum investment of $500,000 per investor.

Congress might change the minimum investment amount to $800,000, and it might require that some of those jobs be permanent, instead of indirect. 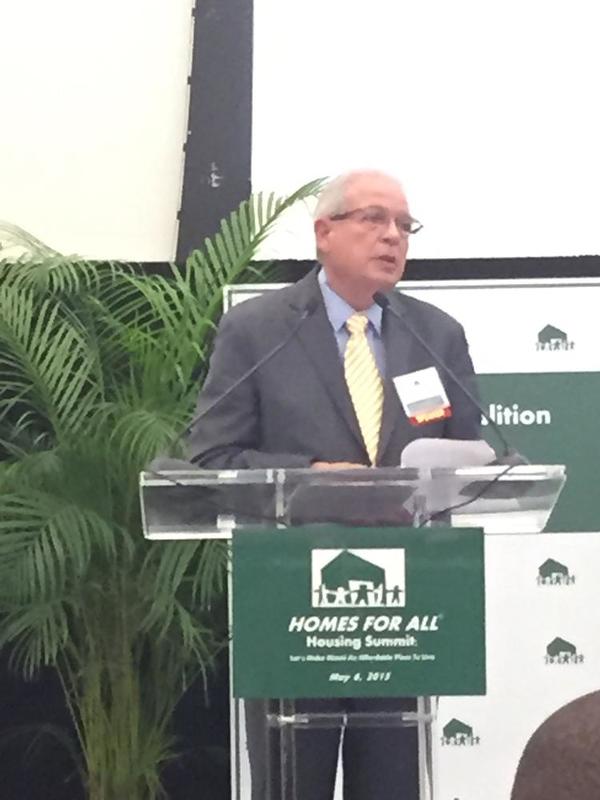 Robert D. Labes, an attorney with Squire Patton Boggs, said EB-5 funds are a good fit to build affordable and workforce housing because they could be used through the regional center to make a five-year, interest-free loan. Most EB-5 investors would have to keep their money in the program for at least five years while they get their green cards, and that should be plenty of time to build the apartments, he said.

Ronald Fieldstone, an attorney with Arnstein & Lehr, said EB-5 investors' main goal is to obtain green cards for themselves and their families, not to get a good return on investment. They would still like to get their money back. He noted that 85 percent of EB-5 investors are from China. Latin America is a small player in EB-5, but Fieldstone expects that to pick up as funds continue to flow out of that region.
Randall L. Sidlosca, an attorney with Fox Rothschild, said building affordable housing as part of a mixed-use “village” would make it financially viable for EB-5 investors and conventional lenders. Combining rentals with green space, cultural and social activities, retail, and health and wellness facilities make a project more attractive to investors, he said. Sidlosca said Downtown Dadeland is a good model of such a village in an urban setting. The $1 billion Hudson Yard project in New York, the nation’s biggest EB-5 development, has a mix of uses and can be replicated on a smaller scale in South Florida, Sidlosca said.

Sidlosca said that adding retail and health uses to a project would help meet the permanent job creation requirements that Congress is considering for the program.

Akerman attorney Steven Polivy said EB-5 investments work well as mezzanine financing for development projects. Mezzanine loans take a collateral interest in the equity of the developer, but are secondary to first mortgages. The difference in interest rates between first mortgages and EB-5-related loans isn’t much, but they are much cheaper than the double-digit interest rates demand of private market mezzanine loans, he said.

Polivy said EB-5 investments are also effective as preferred equity in a developer, which gives investors a defined interest return and a fixed exit strategy.

It’s my pleasure to talk to you! We are offering professional Source of Funds (SOF) report for EB-5 petitioners. As you might have heard about BDO consulting previously and I just recap here,

- * BDO Lixin Group delivers world class accounting, assurance, tax, financial advisory, public offering services and consulting services to clients throughout China and HK
- *Currently BDO ranks No.5 accounting network in the world, and our Chinese partner ranks No.1 among local firms national wide
- *BDO Lixin, with 29 branches in China, has over 8,000 employees, including 1,900 certified public accountants
- *We are the BDO consulting firm and we specialize in providing source of fund services to both corporate and individuals.
- * We offer consulting services to assist clients to generate investment funds and to make initial public offerings.

We can provide not only professional source of funds report but also clients resources.

Moreover, appointed by the Ministry of Finance and with its policy, our group is delegated as the exclusive professional service provider for China capital market, such as A shares and H shares public offering.

If you want to cooperate with us ,please don’t hesitate to contact me.