State is redacting EB-5 records released to the court 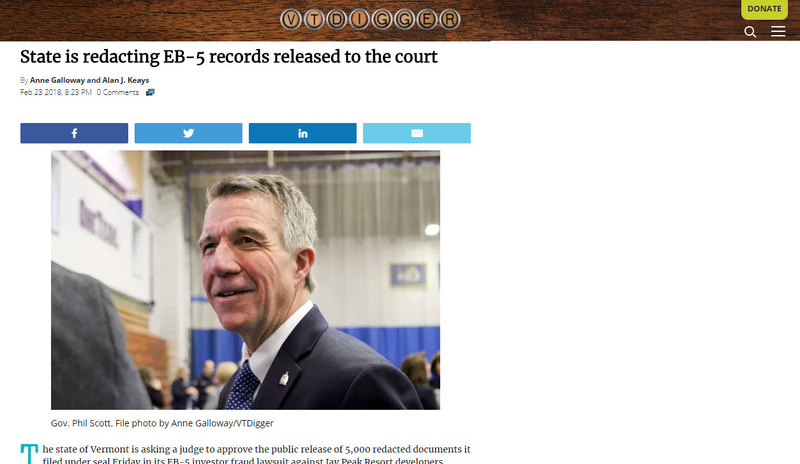 The state of Vermont is asking a judge to approve the public release of 5,000 redacted documents it filed under seal Friday in its EB-5 investor fraud lawsuit against Jay Peak Resort developers.

The request is the first of several expected following the state’s hiring of a private company last month to redact “Personally Identifiable Information” from as many as 1.5 million documents it possesses related to the case. The state has already turned over 1 million pages to the attorneys for the developers.

The Vermont Attorney General’s office and the Vermont Department of Financial Regulation are asking the court to approve to motions: One places the records under seal, the other would unseal the records to the public.

“Given the significant public interest in one of largest alleged fraud cases in Vermont’s history, I feel it’s important to take these steps to put documents forward as quickly as possible, while ensuring we preserve the integrity of the legal process as we seek justice in this matter,” Republican Gov. Phil Scott said.

The court motions are part of Scott’s “expedited plan,” which he put in place nearly a year ago. The lawsuit, State v. Ariel Quiros; William Stenger, was filed on April 16, 2016.

TJ Donovan, the Vermont Attorney General, said the legal system moves at a very slow pace “for a good reason.”

“We’re getting them [the records] out, albeit slowly,” Donovan said. He emphasized that the state is “complying with the rules of the legal profession.”

“The people deserve to know what is happening with EB-5 and what the state’s role is,” Donovan said. “I want to reiterate that we want to be as transparent as possible. This is the balance of operating within the legal system.”

If the Vermont Attorney General’s request to the judge is successful, however, it will be a long time before the public gets access to documents that reveal just how former Gov. Peter Shumlin, a Democrat, and other state officials promoted the Jay Peak projects and stood by as the developers stole money from the investors.

That’s because Donovan and Mike Pieciak, the commissioner of the Vermont Department of Financial Regulation, are submitting “non-privilege” documents to the court. That means the documents entered into the court will be heavily redacted. The two lawyers have blocked release of records pertaining to legal strategy. In addition, they will not be releasing to the court any records from Shumlin’s office.

The lawsuit has enabled the state to claim a blanket relevant litigation exemption for more than two years, blocking release of documents that have been requested by VTDigger that would help to explain how state officials charged with managing and overseeing the projects through the state-run Vermont EB-5 Regional Center, allowed the developers to defraud more than 800 EB-5 investors over an eight-year period.

Federal regulators accuse the Jay Peak developers of perpetrating a Ponzi-like scheme in which Stenger, the CEO of the Northeast Kingdom resort, was the front man for the fraud and Quiros allegedly enriched himself. The Securities and Exchange Commission accused both men of misusing $200 million of EB-5 investor funds and were charged with 52 counts of securities fraud. Earlier this month, Quiros settled for $84 million; Stenger settled for $75,000. Neither man contested the SEC’s allegations. Stenger is continuing to work for court-appointed receiver Michael Goldberg, who is overseeing the properties related to the case, including Jay Peak and Burke Mountain ski resorts.

Investors have sued the state for breach of contract and complicity in the fraud. Shumlin had a tight relationship with the developers and actively promoted the Jay Peak development. He was featured in a promotional video distributed to potential investors in China in which he said all of the Quiros and Stenger projects were audited by the Vermont EB-5 Regional Center, even though the state never had access to Jay Peak’s financial records. Shumlin also solicited EB-5 investors for Stenger in Miami in 2011. He went on a $100,000 junket through China and Vietnam in 2013 with an entourage that included Lawrence Miller, the former commerce agency secretary, and Alex MacLean, who took a job with Stenger when she left Shumlin’s administration as deputy chief of staff. Shumlin also accepted more than $20,000 in campaign donations from the developers and associates.

Records generated by Shumlin and officials within his orbit are protected by an executive privilege exemption and will not be released to the public through the court, according to Mike Pieciak, the commissioner of the Vermont Department of Financial Regulation.

Communications between state officials at the commerce agency, the Department of Financial Regulation and the governor’s office and attorneys who offered legal and strategic advice will not be made public. Other, unspecified, exemptions may also apply to the documents, according to the court filing.

The release of “non-privilege” records in the case will not be completed until after the election (Nov. 15). After that, depositions would be taken. It could be several years before the case goes to trial, and the public is finally given access to information about the state’s role in the fraud.

The governor and Donovan say the plan honors their commitment to transparency because typically “all documents relevant to the litigation would remain sealed until the conclusion of the case.”

In contrast, in the SEC civil case against Quiros and Stenger, hundreds of pages were released at the time regulators brought charges. In the months following, thousands pages were released to the court record and the public. There were scores of motions and exhibits filed over the course of the 22 month period in which it took the case to settle.

The state of Vermont, however, may never release critical information about the state’s role in the fraud. There been very few filings in the state’s case outside of Quiros’ motion to dismiss and the state’s request to extend the discovery process, which was originally supposed to have been completed at the end of last year. The state request, and the court approved, a 11.5 month extension.

Attorneys with the Vermont Attorney General and the Department of Financial Regulation have spent a year redacting 1 million pages of records. It is unclear how much this effort has cost the state. The Secretary of State’s fee schedule says the cost of redaction is 57 cents per minute. State officials have said it takes approximately 1 minute to review two to three pages.

The state, in its motion filed Friday in Washington County Superior Court, said that the Chicago-based firm, Percipient, LLC , has redacted 5,000 of those documents, which have been filed under seal along with its motion asking Judge Mary Miles Teachout to allow them to be released to the public.

In addition to what the Attorney General’s Office has already spent, the state is paying the private company 30 cents per page to redact the documents, with the state expecting to release them in batches on a rolling-basis once approved by a judge. The documents would then be made available on the website of the state Department of Financial Regulation.

Examples of Personally Identifying Information that will be redacted, according to the state Department of Financial Regulation, include social security numbers, bank account numbers and driver’s license numbers.

When the governor called for the expedited release of the records in March 2017, the plan called for following the discovery schedule in the case, which was expected to be complete by December 2017.

However, late last year Teachout approved a request from attorney general’s office, with the defendants, Quiros and Stenger, agreeing to push back that discovery deadline to Nov. 15, nearly a year later and about a week after the next election for statewide offices.

Pieciak has said that the plan balances the public’s right to know with the privacy interests of investors.