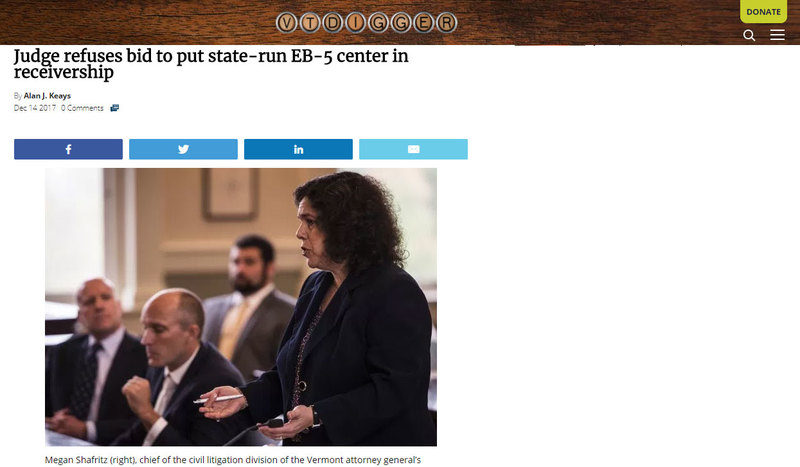 Megan Shafritz (right), chief of the civil litigation division of the Vermont attorney general’s office, argues on behalf of the state in Vermont Superior Court in Hyde Park on Monday, saying that Vermont is immune from liability for what happened in the EB-5 program and investment in Jay Peak.

A Vermont judge has rejected a bid by a group of investors to put the Vermont EB-5 Regional Center under receivership.

Judge Thomas Carlson wrote that the ruling “avoids a dangerous usurpation of authority to execute the law.”

Carlson issued his eight-page decision in response to a motion filed by attorneys of the Barr Law Group of Stowe on behalf of five EB-5 investors in their lawsuit against the state of Vermont and 10 current and former state officials.

Carlson, presiding over the lawsuit against the state brought in Lamoille County Superior Court, wrote the plaintiffs had failed to show how the situation would improve for the investors if a court-appointed receiver managed the regional center rather than the state.

“Of course there is almost always room for more expertise in the room,” the judge wrote, “but Plaintiffs did not offer any particular roadmap by which that expertise would lead to any better outcome for Plaintiffs, either with respect to their immigration status or return of their invested funds.”

Judge Carlson added that the plaintiffs presented no evidence that the regional center, which has provided services over the years but does not control assets, is holding or managing any of the investors funds.

There were jurisdictional issues that the court-appointment of a receiver to oversee a state-run program could also create, the decision stated.

“This motion does not seek a remedy by way of compensation for loss but rather the taking over of the securities regulation function of the executive branch as it relates to the (EB-5) program,” the judge wrote. “This decision does not limit the Plaintiffs remedies for loss. Rather, it avoids a dangerous usurpation of authority to execute the law.”

Russell Barr, an attorney for the investors, said though the judge denied his request there were parts of the decision he saw as encouraging to his overall case.

“While we don’t necessarily agree with the outcome of the decision,” Barr said, “we respect it and understand how difficult it is for the judge to help resolve this decade long travesty.”

Assistant Attorney General Megan Shafritz, chief of the office’s civil litigation division and representing the state, said she was pleased with the judge’s ruling.

“The court held it did not under the separation of powers doctrine have jurisdiction to take the extraordinary step of imposing a receiver over a department of the state and in any event plaintiffs have not provided the necessary factual basis for the court to do so,” Shariftz said. “We agree with that.”

The lawsuit alleges the EB-5 regional center and those in charge of its operation were essentially in partnership with the developers in carrying out the fraud scheme. State officials promoted the developers’ projects to new investors after becoming aware of the misuse of funds, falsely claimed the projects were audited by the state, and then engaged in a coverup, according the lawsuit.

The state objected to the appointment of a receiver, and has also filed a motion to dismiss the lawsuit outright. The state claims sovereign immunity as a defense. Attorney General TJ Donovan has said the state employees were acting in good faith as they carried out their duties.

The judge cautioned that his recent ruling affects only one part of the case.

The bid by the investors in the lawsuit to appoint a receiver followed a notice of termination for the regional center the state received weeks earlier from the U.S. Citizenship and Immigration Service.

The notice cited a “preponderance of the evidence” the state officials failed to properly manager and monitor center, effectively looking the other way as the Jay Peak developers allegedly stole investor money for years through what federal regulators termed a “Ponzi-like” scheme.

The state is appealing that notice of termination, seeking to “wind down” its operation rather than abruptly shuttering the regional center. State officials say that regulatory controls put in place over the regional center in 2015 by the state Department of Financial Regulation are sufficient to protect investors.

The U.S. Securities and Exchange Commission brought a civil action against Quiros and Stenger, alleging 52 counts of securities fraud involving the misuse of $200 million in investor funds raised through the EB-5 program. The funds were meant to fund a series of eight projects, including massive upgrades at the resort, a new hotel in Burke and biomedical facility in Newport.

Each investor in the EB-5 visa program puts up $500,000, plus an administrative fee, into a qualified project. If that investment meets job-creating requirements that investor becomes eligible for U.S. residency.

However, due to the alleged investor fraud, about 400 of the more 800 investors in the projects headed by Quiros and Stenger are at risk of not obtaining their green cards. All of the Quiros’ assets, including Jay Peak and Burke Mountain ski resorts which he had owned, have been frozen and a federal-court appointed receiver is now managing and overseeing them.

Judge Carlson, in this recent ruling, states that it is that federal-court appointed receiver, Michael Goldberg who has “full authority to trace and recover investor funds wherever they may be found.”