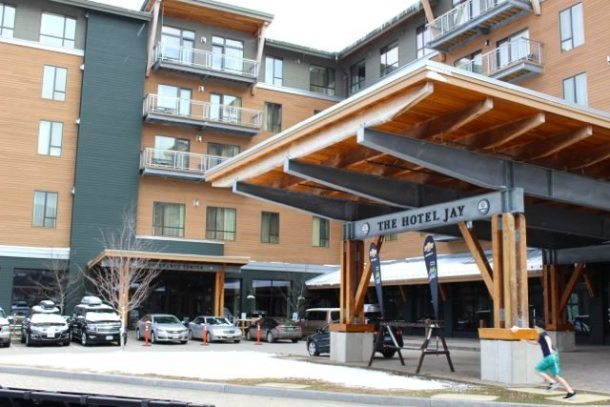 The Hotel Jay is the signature project of the Jay Peak Resort expansion. The developers used EB-5 immigrant investor money to build the five-story hotel. An investor alleges that the fifth floor was double-sold to two sets of investors. VTDigger photo

Lawyers for a group of EB-5 investors are asking a federal judge to certify their fraud lawsuit against the Jay Peak resort developers and People’s United Bank.

The recent filing was brought in the investors’ case against Jay Peak owner Ariel Quiros and Bill Stenger, the resort’s former president, as well as the bank, which has branches in Vermont and is headquartered in Bridgeport, Connecticut.

The lawsuit accuses the two developers and People’s United Bank of carrying out a scheme that included the improper use of hundreds of millions of dollars in investor funds meant to pay for developments at Jay Peak and Burke Mountain ski resorts, as well as projects in Newport.

“Regardless of individual issues that may arise, this litigation will focus on Defendants’ common course of conduct,” Thomas A. Tucker Ronzetti, a Coral Gables, Florida, attorney, wrote in a filing this week on behalf of the investors bringing the case.

“The key issues at trial will be whether Quiros and Stenger misused and commingled investor funds, and whether People’s Bank aided and abetted Quiros and Stenger and breached duties owed to and escrow agreements with Jay Peak investors,” the filing stated. “Given that focus, the evidence that Plaintiffs will offer to prove their claims will be common to all class members.”

Currently, a handful of investors are bringing the action, with Alexandre Daccache of Brazil listed as the lead plaintiff. Daccache invested $500,000 in 2010 through the federal EB-5 immigrant investor program into the Penthouse Suites project, which is part of The Hotel Jay.

That EB-5 project, headed by Quiros and Stenger, was one of several at the resort as well as others in Burke and Newport led by the two developers over an eight-year span.

The latest filing seeks to certify as a class the 837 investors who put money into those projects. Each EB-5 investor put up $500,000 through the federal visa program. If their investment led to the creation of 10 jobs, an investor became eligible for permanent U.S. residency.

“The critical issues in this case – the existence, implementation, and unlawfulness of Defendants’ fraudulent scheme by Quiros and Stenger and the Defendants who assisted them and breached obligations to investors – are common to Plaintiffs’ claims and the claims of the class,” the filing stated. “Win or lose, Plaintiffs’ claims will turn on the same common proof as those of every other class member.”

In April 2016, federal and state lawsuits accused Stenger and Quiros of misusing $200 million raised through the EB-5 program, including using funds set aside for specific projects to fund work on earlier projects. The lawsuits allege Quiros used an additional $50 million for personal expenses.

The Daccache case had been on hold since earlier this year when one of the defendants, Raymond James & Associates Inc., reached a $150 million settlement with Michael Goldberg, a court-appointed receiver now overseeing the assets at the center of investor fraud lawsuits brought by federal and state regulators.

The settlement contained a provision barring further lawsuits against Raymond James and its employees. As a result, the financial institution has been dropped as a defendant from the Daccache proposed class-action lawsuit.

Also dropped as a defendant as a result of the earlier settlement was Joel Burstein, Quiros’ former son-in-law, who served as the branch manager of a Raymond James office in Coral Gables, Florida.

Earlier this year, lawyers for the investors in the Daccache case filed a motion seeking to have the case certified as a class-action. However, that request was later “stricken” by the judge to allow the parties to conduct additional discovery in the case, and then the lawsuit was placed on hold.

The judge presiding over the Daccache lawsuit, which is pending in federal court in Miami where many of Quiros’ businesses are based, agreed to a request from the investors to reopen the case in September.

The latest filing alleges that People’s United Bank, which was holding investor funds in escrow accounts, was aware of “red flags” that put the bank on notice of Quiros’ “misconduct.” For example, according to the filing, in March 2010 the bank received a letter from an investor’s attorney accusing the developers of misleading investors and requested a refund.

Also, in 2010, a bank vice president at the time was copied on an email in which a Jay Peak investor requested the return of escrowed funds held at the financial institution, the filing stated. That investor claimed not to have “money to give food to my small children,” according to the motion.

Ronzetti, the attorney from Florida who filed the motion on behalf of the investors, and Jonathan E. Minsker, a Florida attorney representing People’s United Bank, could not be reached Wednesday for comment.

Melissa Visconti, also a Florida attorney and representing Quiros, said in an email that she is opposed to certifying the case a class-action, but declined further comment.

Both People’s United Bank and Quiros in court filings have denied wrongdoing and have pending motions to dismiss the case against them.

Attorneys for People’s United Bank in contesting the allegations, have raised several arguments, ranging from the claims taking place outside the statute of limitations, to challenging the jurisdiction of the filing of the lawsuit in Florida, to disputing that officials at the bank knew of the alleged scheme.

People’s United Bank has also argued in filings that any damages in the class-action case should be offset by any money investors have received from previous settlements.

This is not the only proposed class-action lawsuit brought in connection with the largest alleged EB-5 investor fraud case in the history of the federal program.

In that other case, a group of investors have brought a lawsuit against state agencies and 10 past and present state officials, accusing them of fraud and engaging in a coverup.

The lawsuit alleges they made false claims about Vermont’s EB-5 Regional Center, including that the projects were audited by the state. The suit also alleges that the center continued to promote the projects and seek new investors even after the misuse of investor funds had been brought to the state’s attention.

Russell Barr, the owner of Stowe Aviation and Barr Law Group, is the lead attorney in that proposed class-action investor lawsuit against the state. He said Wednesday that the request to certify the Daccache case a class-action lawsuit doesn’t conflict with his case, which is also seeking to become a class-action.

The two lawsuits, Barr said, involve different defendants, with the Daccache case targeting the developers and the bank, while his lawsuit is taking on the state agencies and the 10 current and past state officials.

“I see it as a good thing,” Barr said. “If they do certify that class, which they should, that only helps us because it’s basically the same class with a different defendant.”