State must face up to failures in EB-5 scandal 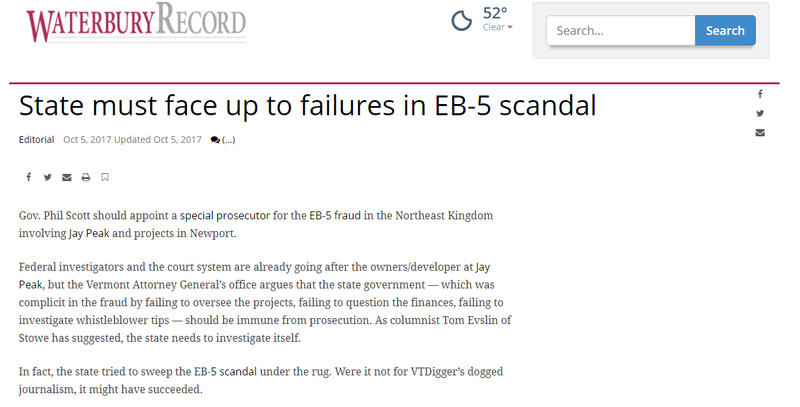 Gov. Phil Scott should appoint a special prosecutor for the EB-5 fraud in the Northeast Kingdom involving Jay Peak and projects in Newport.

Federal investigators and the court system are already going after the owners/developer at Jay Peak, but the Vermont Attorney General’s office argues that the state government — which was complicit in the fraud by failing to oversee the projects, failing to question the finances, failing to investigate whistleblower tips — should be immune from prosecution. As columnist Tom Evslin of Stowe has suggested, the state needs to investigate itself.

In fact, the state tried to sweep the EB-5 scandal under the rug. Were it not for VTDigger’s dogged journalism, it might have succeeded.

The fraud did more than cheat people out of money; it crushed dreams of a revival in the Northeast Kingdom, the most economically depressed part of the state. You drive through that region and you wonder, “Where do these people work?” So, when the owners/developers unveiled huge plans to build up Jay Peak, buy another ski resort, and build major facilities in the extremely depressed city of Newport — and create 10,000 jobs —cheers echoed across the state. Top state officials and all three members of Vermont’s congressional delegation were completely onboard with the development plans.

Enter EB-5, the key to the Jay Peak financing. EB-5 offers a green card to foreigners if they invest at least $500,000 in a job-creating project. And so began the fraud.

Now five EB-5 investors have sued, alleging that state officials acted as a partner in a private business enterprise that harmed 890 foreign investors, each of whom put up $550,000 for the projects. Many of the immigrant investors say they would not have invested in Jay Peak without the state government’s stamp of approval.

Vermont should be ashamed of its EB-5 failures. The state has never admitted its failings in the Jay Peak fraud, and tried to silence VTDigger as it continued to poke into the case. State political and economic leaders howled about the coverage. Residents of the Northeast Kingdom were furious, accusing Digger of looking a gift horse in the mouth. The governor, Peter Shumlin, compared VTDigger to the National Enquirer. The pressure was tense, and intense.

Digger has shown that state officials overseeing the Jay Peak EB-5 projects ignored warnings about financial improprieties way back in 2012, and greenlighted the projects anyway. State officials fought tooth and nail against releasing crucial documents in the scandal, in violation of state law, and claiming that records didn’t exist or had been destroyed. Documents were redacted to the point of absurdity. Many other documents have never been released. And, if the state gets its way, they never will be.

Asked about the case last week, Scott said, “We’ll see what happens in the near future, but I want to make sure that we release all the information we can so that … people have some trust with the government.”

Enough. Vermonters should know the truth about what was done in their name. It’s time for Scott to appoint a special prosecutor.