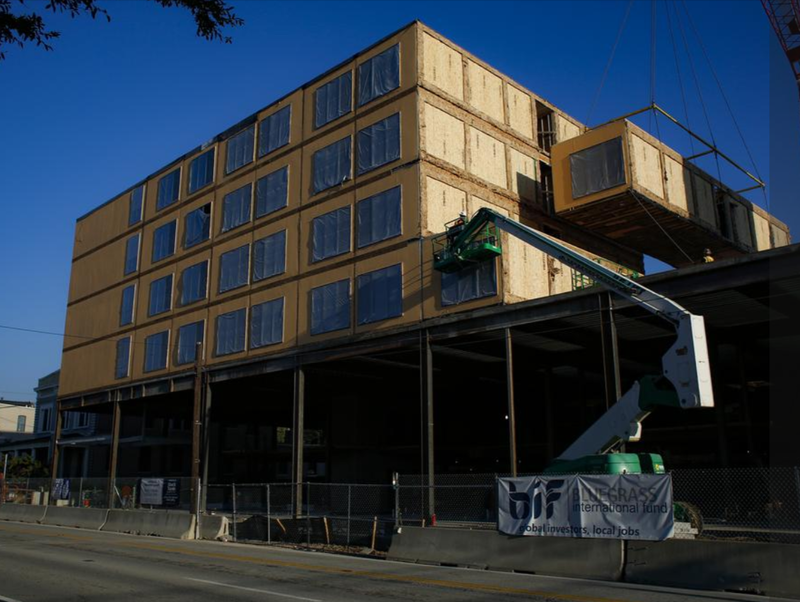 The developers of a nearly $43 million hotel in NuLu are taking an intriguing approach to its construction.

Raleigh, N.C.-based Concord Hospitality Group, a co-owner and co-developer of the AC NuLu Hotel at 725 E. Market St., near Shelby Street, has arranged for all 156 guest rooms to be constructed as modular units that are built off-site in two Pennsylvania factories.

Ron and Mollie Turnier, owners of Creation Gardens Inc., along with Concord Hospitality and The 725 Partners Inc., are partners in the development. Additional partners are Creation Gardens COO Rob Webber, local developer Terry Cheynoweth and Steve Kersey, lead architect and partner at Kersey and Kersey.

AC Hotel is a Marriott flag.

Media and community leaders, including Louisville Mayor Greg Fischer, were on hand Wednesday morning to watch some of the modular units being stacked into place.

Each modular unit contains one or two fully furnished hotel rooms and a hallway corridor. The units, each of which take 10 to 14 days to finish, are stacked on top of one another Lego-style, and eight to 10 units can be stacked in a single day, said Eric Handley, vice president for Illinois-based general contractor Wm. A. Randolph Inc.

The hotel rooms include a bed, sofa, desk, large lounge bench and a full bathroom with a stand-up shower.

Carl Hren, vice president of architecture and construction for Concord Hospitality, said modular construction helps compress a construction timeline and removes some of the challenges faced by a subcontractor shortage in the Louisville market.

He said all of the modular units will be stacked in three weeks, shaving two and a half months off the project's schedule.

As much as 98 percent of the work on the modular units has been completed when they roll off the truck, he added. Each unit is fully equipped with all the plumbing, electrical and technology equipment, which is hooked up after the stacked units are in place.

The five-story hotel, which will be about 100,000 square feet, is set for a grand opening in spring 2018, ahead of the Kentucky Derby. A four-story parking garage with 195 spaces also is being built.

Handley said about 60 workers are on site now, but that will ramp up to a peak of about 100.

The common areas and amenity spaces — including meeting space, a full bar and a 5,000-square-foot restaurant — are being constructed using traditional on-site methods. Hren said the developers have not signed a restaurant concept for the space, but they want something that will stand out in a neighborhood already known for its restaurants. 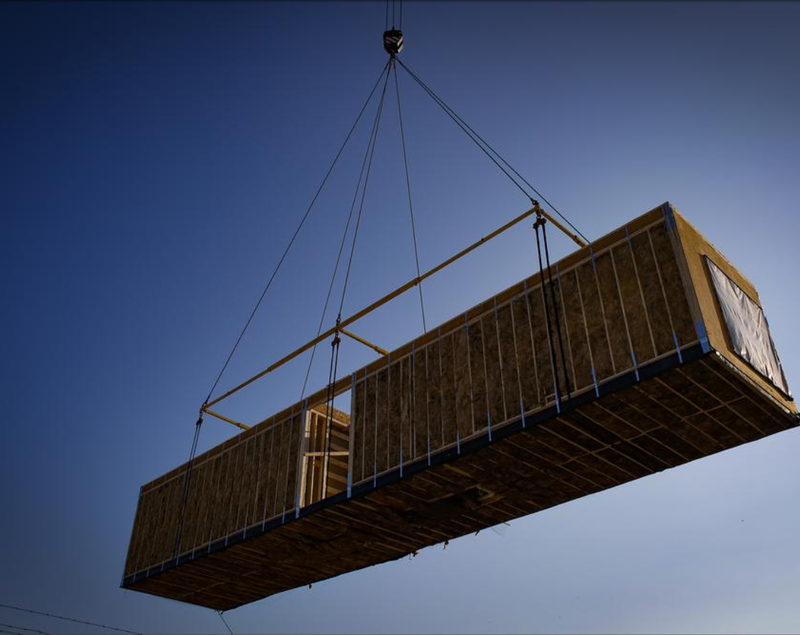 Chris Waters, director of business development for Michigan-based Champion Commercial Structures, said modular construction is taking off in other parts of the country and has finally made it to Louisville. Champion is a prominent modular builder that specializes in hotel and hospitality projects, apartments, student housing and workforce housing.

"I'm sure it won't be the last," he said of modular projects in Louisville.