Tom Evslin: Vermont Should be Investigating Itself 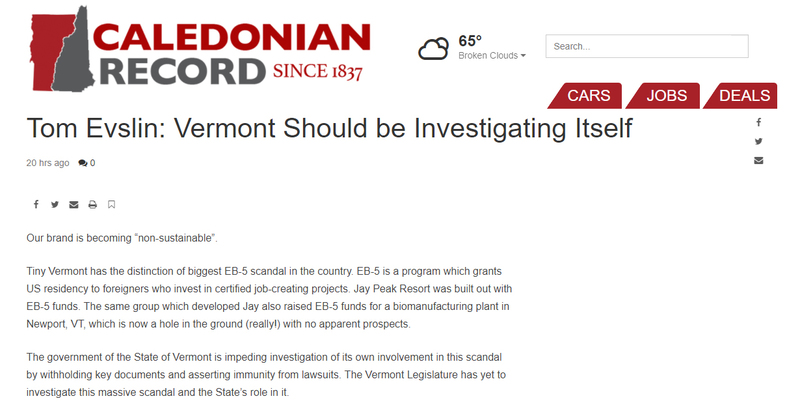 Our brand is becoming “non-sustainable”.

Tiny Vermont has the distinction of biggest EB-5 scandal in the country. EB-5 is a program which grants US residency to foreigners who invest in certified job-creating projects. Jay Peak Resort was built out with EB-5 funds. The same group which developed Jay also raised EB-5 funds for a biomanufacturing plant in Newport, VT, which is now a hole in the ground (really!) with no apparent prospects.

The government of the State of Vermont is impeding investigation of its own involvement in this scandal by withholding key documents and asserting immunity from lawsuits. The Vermont Legislature has yet to investigate this massive scandal and the State’s role in it.

According to VTDigger, which has done Vermont a great service by relentless coverage of this scandal:

“In April 2016, the Securities and Exchange Commission charged [Ariel] Quiros [former owner of Jay Peak] and [Bill] Stenger [former President and CEO of Jay Peak] with 52 counts of securities fraud and with misusing $200 million in immigrant investor funds through the EB-5 visa program, which grants permanent residency to foreigners who invest $500,000 or more in U.S. businesses and create at least 10 full-time jobs. In all, 836 investors from 74 countries were allegedly defrauded by the developers…[Stenger has since reached a settlement with the SEC]

“Many of the investors blame the Vermont EB-5 Regional Center, an arm of state government that was charged with monitoring the EB-5 program in Vermont, for not properly overseeing the Jay Peak projects. Top state politicians, including Gov. Peter Shumlin, U.S. Sen. Patrick Leahy, U.S. Rep. Peter Welch and Gov. Jim Douglas all promoted the developments to investors overseas on behalf of Stenger and Quiros.”

Last month the U.S. Citizenship and Immigration Service, which oversees the EB-5 program for the feds, wrote to Vermont that it is planning to terminate the State’s authorization to oversee the program saying “the Regional Center’s failure to provide adequate oversight and monitoring of its projects allowed the alleged malfeasance by Quiros and Stenger to occur and jeopardize the Regional Center’s ability to promote economic growth within EB-5 program requirements, as well as the EB-5 investors’ investments.”

Some investors have sued the State and former officials for their lack of oversight and active promotion of the projects. According to VTDigger:

“Megan Shafritz, the lead lawyer for the state, has said Vermont officials have ‘absolute immunity’ in the case, which protects them ‘from the burdens of discovery and litigation generally.’

“Shafritz has urged the court to block the release of documents and the deposition of a key witness in the investors’ case until after the court has ruled on a motion to dismiss, which the attorney general’s office has yet to file.”

The former officials and the State are being defended by the attorney general’s office, which is the State’s internal law firm and usually defends actions against the State; the accused officials are certainly entitled to a defense. However, if the AG’s office’s role is defense and protecting the State, then who represents the citizens of the State if officials are guilty of wrongdoing? Are we totally dependent on the feds and/or private lawsuits to protect us against state government malfeasance?

In the federal government there is a recognized problem with the Justice Department headed by the attorney general, who is a presidential appointee, investigating the president; that’s why we have special prosecutors. But in Vermont the AG is elected independently. Do we still need a special prosecutor because the AG’s office needs to defend instead of investigate and prosecute state officials? Hard to believe but, if so, we should appoint one to look at the state’s role in this fiasco!