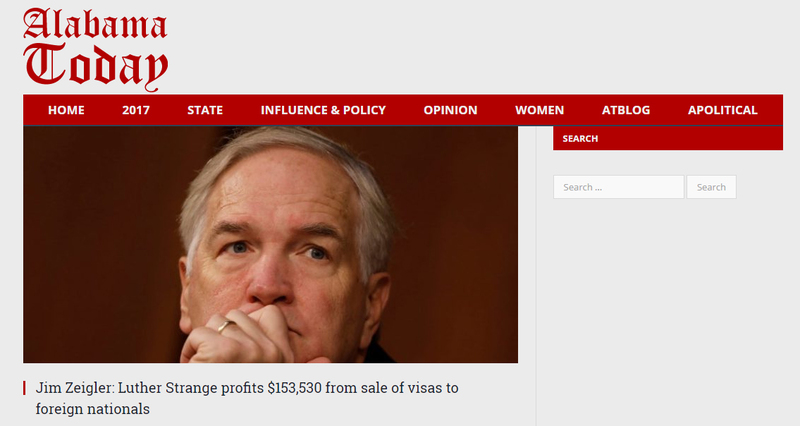 U.S. Sen. Luther Strange earned $153,350 in 2016 from the sale of VISAs to wealthy foreigner nationals, allowing them to bypass the legal immigration process.

The disclosure was made by Alabama State Auditor Jim Zeigler, who called the earnings “a clear conflict of interest for a U.S. Senator who votes on immigration law, including this very program.”

Established in 1990, the controversial EB-5 Visa program allows real estate developers to sell legal immigration status to wealthy foreign nationals for $500,000, thus allowing the very rich to buy their way into legal status. Under the program, those foreign nationals, their spouses and their unmarried children under 21 years old are able to apply for fast-tracked green cards, nicknamed the “Golden Card” due to the high fee.

On Monday, Alabama Today unveiled Strange owns roughly 1/6 of Sunbelt EB-5 Regional Center LLC, a company selling VISAs to non-U.S. citizens, which packages investments from foreign investors with businesses in the U.S. needing capital. In this case, the business was Baptist Health Systems Inc. of Birmingham.

Zeigler calls Sunbelt’s practices a “pay to play” program, allowing them to essentially trade legal status in the U.S. to wealthy overseas investors in exchange for funding projects in economically depressed areas of the U.S.

“Strange has been talking tough on immigration in his campaign, but it is only talk,” said Zeigler, a long-time critic of Strange. “Luther Strange is making big money off wealthy foreigners, enabling them and their families to come to America and bypass the legal immigration process.  This is exactly the type of self-serving that we do not need in Washington.”

Iowa Republican Sen. Charles Grassley, shares Zeigler’s sentiments regarding the EB-5 program saying it has been “plagued by fraud and abuse.”

“The EB-5 regional center program has been plagued by fraud and abuse. It poses significant national security risks,” said Grassley. “There are serious allegations that the program may be facilitating terrorist travel, economic espionage, money laundering and investment fraud.”

Strange was appointed to the U.S. Senate in February by former Gov. Robert Bentley. He is currently running for the remainder of the term of former Sen. Jeff Sessions, who vacated the senate seat when he was appointed by President Donald Trump as U.S. Attorney General, against former Ala. Chief Justice Roy Moore.