‘Give Me Your Contented, Your Rich;’ EB-5 Visas in LA — Immigration for the 1% 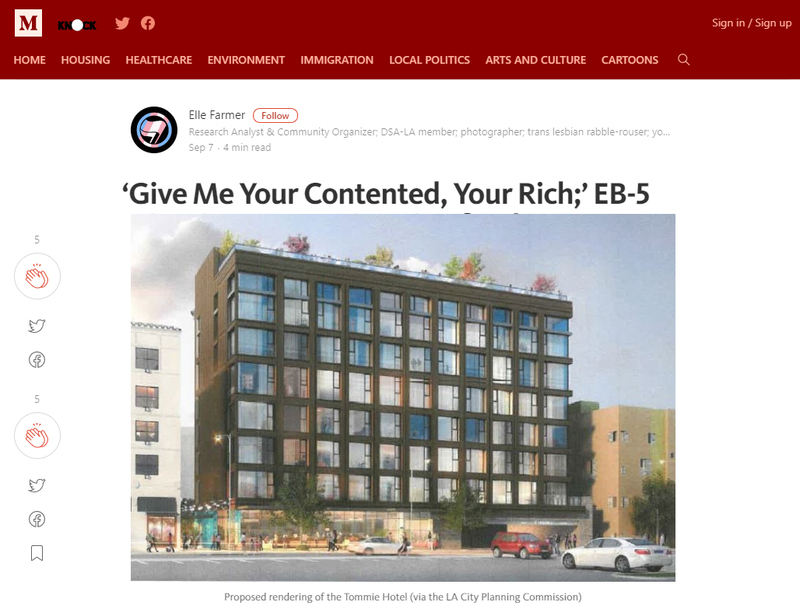 The Trump administration is rapidly expanding the scope of deportations and ICE raids against immigrants, and this week ended DACA. Thousands of people have already been swept up or live in fear being so, and now 800,000 DACA recipients are facing life-shattering uncertainty. While that is happening, the controversial EB-5 Visa program allows real estate developers to sell legal immigration status to foreign investors for $500,000, allowing the very rich to buy their way into legal status.

The EB-5 program, started in 1992, allows real estate developers to apply to create “Regional Centers”, which can then pool investments from non-US Citizens. The program was not designed to be permanent and is operating on short term extensions when Congress reauthorizes its temporary budget. It has been in this unreformed semi-limbo (but still operating) state for some time. According to USCIS, as of Sept. 5th, 2017 there are currently 835 active “Regional Centers” in the US. 206 of them are in California alone. In 2015 USCIS reported 8,756 visas issued to immigrants who invested a total of $4.4 billion (with a conservative assumption that each investor invests at the lowest threshold of $500,000 each).

Non-U.S. citizen investors who invest $500,000 or more receive “conditional permanent residence for a 2-year period” for themselves and their immediate family. At the end of two years they can apply to have conditions removed if they remained an investor during that period and receive full permanent residence status. The investment is required to create a small number of jobs in the area but Regional Centers are allowed latitude in how they measure the job-creation effect. There is little review or oversight after-the-fact on those claims. In some cases, regional centers and EB-5 investors can count “indirect jobs” from the $500,000 investment, so it becomes difficult to tell if that investment created any “permanent jobs” at all.

The Hollywood International Regional Center (HIRC) was started in 2011. Its associated development company, The Relevant Group (formerly Five Chairs Development), has proposed multiple projects in the core of Hollywood since then. The largest, their “Dream Hotel” project which opened this year on Selma Ave, had at least $48,000,000 in EB-5 investment involved in its creation.

HIRC’s Dream Hotel Phase II was initially proposed in 2014. A 2014 statement said HIRC was seeking 65 percent of the $43 Million cost through EB-5. The project was formally filed with the City of LA planning department in July of 2016 and assigned to planning staff in November of 2016. The current plans are nearly one-third larger than the 2014 plan.

HIRC has a third project called the Tommie Hotel just down the street for which the developer requested an expedited planning process through City Hall in October 2016. The project was approved by the City Planning Commission in January 2017, and was then approved by the City Council after an appeal in May 2017. A group of residents have filed a lawsuit to force the city to perform a full Environmental Impact Report on the project. In 2015 HIRC executive Scott Barrack said HIRC was seeking $35,000,000 in EB-5 Investment for this project.

The development community is aware of how important inexpensive EB-5 capital investment and they lobby to protect it, with only a portion of that lobbying totaling hundreds of thousands of dollars.

Invest In the USA (IIUSA), an industry group that says their “primary mission is permanent reauthorization of the EB-5 Regional Center Program by Congress” is one of EB-5’s biggest federal status-quo defenders.

The Relevant Group recently opened the Dream Hotel, and has at least 2 projects in Hollywood currently going through the entitlement process at LA City Hall or under litigation following approval by the city; it also has a $110 Million development plan for the Morrison Hotel, and potentially others in the wings.

This company, and others like it, are taking in millions of dollars through our country’s deeply unjust immigration system while some segments of society are lobbying hard against basic protections for immigrants like SB54.

In the same city development process, they are trying to develop more hotel projects here in Los Angeles, where major development is happening at a blistering pace. Relevant Group’s offices and most of their projects are clustered in Hollywood, which is represented by Councilmember Mitch O’Farrell.

About 1 million people living in LA County lack documented status and the climate of fear in Southern California communities is real, and growing. Federal immigration officers seem to have taken well to the new anti-immigration climate Trump has ushered into the government and we’ve seen too many examples already that they are willing to escalate the targeting of undocumented people, nearly 70 percent of whom have lived in the US 10+ years.

The EB-5 program is set to expire in September, but is likely to be temporarily reauthorized again with a new continuing resolution on the federal budget. Senator Feinstein and other elected officials have put forward bills to end it permanently in the past but no legislative reform has happened yet. The real estate industry, EB-5’s primary users and beneficiaries, are lobbying to keep it. The deep contradiction of tightening most immigration and all refugee controls while selling green cards to the wealthy with the minimal oversight is appalling.