Future of EB-5 in Vermont moves toward resolution 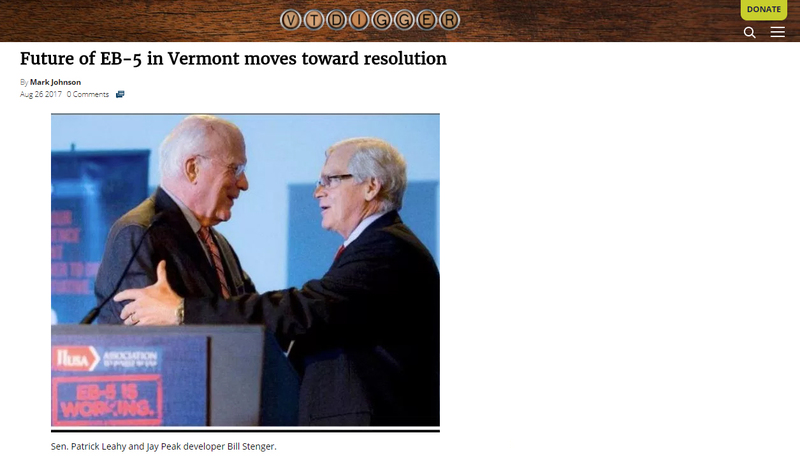 The announcement this week that Ariel Quiros would no longer fight federal fraud charges signaled a key breakthrough in the case against the Jay Peak developer who is accused of running a multi-million dollar “Ponzi-like” scheme.

The partial settlement was approved by a federal judge a day after it was filed in the Miami U.S. District Court, effectively canceling a civil trial scheduled for September 2018.

Meanwhile, another significant action focused on the role of state officials who were in charge of overseeing the tainted projects. U.S. Citizenship and Immigration Services, the federal administrator of the EB-5 program, on August 18 announced its intention to shut down the Vermont EB-5 Regional Center. In the notice of termination, released to the public by Gov. Phil Scott on Monday, the feds said state officials failed in their oversight and monitoring of the projects. The federal government questions about whether state officials did enough to protect foreign investors from getting bilked.

The federal termination letter could fuel a lawsuit filed earlier this summer by a group of investors who accuse state officials of acting like partners in the fraud. The lawsuit alleges that state officials for years ignored questions about the finances at Jay Peak, even after a former business partner and skeptical investors brought serious allegations and damning information to their attention. The state didn’t begin its own investigation into the fraud until 2015.

The attorney for investors suing the state seized on the fed’s report. Russell Barr, an attorney who was involved in his own EB-5 project, says the USCIS findings support his contention that “a non-CPA junior accountant with little practical experience could have uncovered this Ponzi-scheme within an hour of reviewing basic financial records.”

At the same time, the feds threatened to terminate the center, Gov. Phil Scott announced that he already intended to phase out the program. Scott, who took office after the scandal came to light, said this week he wants to keep a shell of the regional center open indefinitely to protect investors in other Vermont EB-5 projects.

Sen. Patrick Leahy’s response to the stinging fed report was to say he was disappointed and to point the finger at Quiros. He also sought to spread the political blame. The state’s senior senator — a friend of the other developer charged, Bill Stenger — has been one of EB-5’s biggest champions. Without reforms, he says the program should now die, and despite the black eye the Vermont program suffered, Leahy says he has no misgivings about his role as a cheerleader for the Jay Peak projects.

The feds believe the fraud goes back as far as 2008, when Quiros bought Jay Peak. Douglas was governor from 2003 to 2011. Shumlin served from 2011 to 2017. The regional center operated hand in hand with the state’s commerce agency, which was supposed to oversee and promote the program. In January 2015, regulatory oversight was moved to the Department of Financial Regulation.

In a settlement with the Securities and Exchange Commission, Quiros has agreed to drop his challenge to the charges he defrauded investors in the Jay Peak projects. The feds accused him of taking $50 million and improperly using $200 million of investor money, using funds from future projects to pay for prior developments. Quiros does not admit guilt and the settlement he reached does not lay out how much he will have to pay investors and in fines and whether he will go to jail. Stenger reached a similar settlement with the SEC earlier this year.

The lawsuit filed by London investor Tony Sutton could open a window on what state officials knew or did not know. Sutton alleges three state entities and 10 current and former state officials were at best “grossly negligent” and at worst intimately involved in a conspiracy to cover up their joint improprieties.

Efforts by news organizations including VTDigger to obtain emails of key state officials have been largely unsuccessful. Those emails could also shed light on what officials did when some investors and insiders told officials they thought Quiros and Stenger were improperly handling funds.

While several key questions were answered this week, namely how long would Quiros fight the charges and whether the feds would allow the Vermont EB-5 Regional Center to remain open, looking forward, numerous questions remain, including:

Will Quiros and Stenger serve jail time? How much money will they have to come up with? Where were any alleged funds that were diverted go? The SEC case involved civil, not criminal charges. The U.S. Attorney’s office is conducting its own investigation and has not yet announced any charges.

Will all the 890 investors from 74 countries be paid back and will the 400-plus whose immigration status remains in limbo get permission to stay in the United States?

Will the investor lawsuit or any future suits, or emails obtained through public record requests, document any negligence or improper activity by state officials?

It’s been 16 months since the SEC brought charges. It will be months and perhaps years before many of these outstanding issues are resolved.

“This is not over,” Scott said, noting all of the legal issues involving against Quiros and Stenger have yet to be settled, along with the investor lawsuit that has now been filed and the uncertainty over the future of the regional center.

“We’ll continue to work our way through this and at the same time try to advocate that we want more investment in the state and grow the economy,” Scott said this week, noting that was a tough act to balance. “It’s going to be very, very difficult as we meander our way through this. But I have confidence that we have the right people in place. I have a lot of confidence” in the economic development and regulatory officials in place.