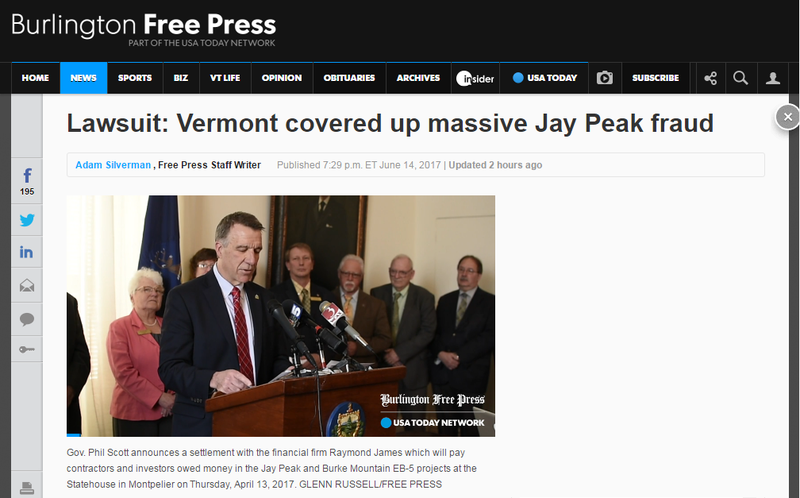 An investor in the Jay Peak development project that federal officials allege was really a massive Ponzi scheme has sued the state of Vermont, claiming officials knew about the fraud but covered it up.

Antony Sutton, who lives in suburban London, is seeking an unspecified amount of restitution and damages from the Vermont Regional EB-5 Center, the Agency of Commerce and Community Development, the Department of Financial Regulation and a number of current and former state officials, according to a copy of the 85-page lawsuit his lawyers provided Wednesday to the Burlington Free Press.

The state ignored and then retaliated against whistleblowers "to silence the revelations of fraud," the complaint alleges, and then conspired to protect itself as the scheme unraveled.

State officials say they have yet to receive a formal copy of the complaint and will reply in court.

The federal Securities and Exchange Commission, along with Vermont authorities, alleged in 2016 that Miami businessman Ariel Quiros and his Vermont partner, former resort President and CEO Bill Stenger, orchestrated a "Ponzi-like" scheme of fraud starting when Quiros purchased Jay Peak Resort in 2008.

Investors contributed hundreds of millions of dollars for seven projects in the towns of East Burke, Jay and Newport through the federal EB-5 visa program, which offers a path to permanent residency for foreign nationals who contribute at least $500,000 to projects that create jobs in rural or economically depressed regions.

Quiros and Stenger were accused in a civil complaint of misappropriating $200 million raised from the foreign investors. The government also alleges Quiros diverted $50 million for personal use. He denies wrongdoing.

Stenger settled his case with the SEC. The allegations were civil rather than criminal, but federal prosecutors in Vermont have said a criminal probe is ongoing.

Sutton's lawsuit alleges that, rather than being the watchdogs of the project that they were expected to be, various state agencies and employees acted instead as conspirators.

"The VRC Team took an active role in the Ponzi-scheme out of self-interest, self-preservation, personal gain, and protection of their Jay Peak partners," the lawsuit states, referring to the Vermont Regional Center.

"The VRC Team's true motivations and role within the Jay Peak fraud are evidenced by years of ignoring investor complaints, as well as attacking and attempting to discredit those who raised issue with the wrongdoing at the Jay Peak Projects and within the VRC."

The complaint has yet to be served on state officials, but they received a copy of the lawsuit from a reporter, Mike Schirling, secretary of the Agency of Commerce and Community Development, said in a statement.

"We will review and respond to the complaint if and when it is formally received," said Schirling, who became secretary under first-term Gov. Phil Scott earlier this year.

The allegations surrounding Jay Peak, and the state's oversight of the project, involve conduct under the administrations of the previous two governors, Peter Shumlin and Jim Douglas.

"We continue to support the projects in the VT Regional Center and, with regard to Jay Peak, are working closely with the Federal Receiver, Michael Goldberg, to ensure the best possible outcomes for investors and impacted parties," Schirling continued. "Unfortunately, we cannot comment in greater depth on a matter anticipated to be in litigation."

Sutton is asking the court to allow his lawsuit to proceed as a class action involving other investors who lost money in the Jay Peak projects. The lawsuit demands a jury trial, court costs and attorney fees in addition to compensatory and punitive damages.