Rich Saffas look at US to jump ship 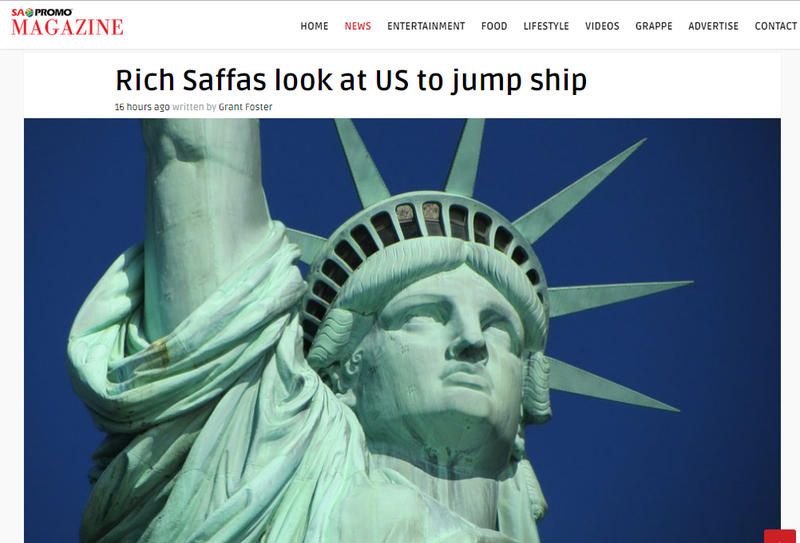 From 2014 to 215 the number of rich South Africans applying for US investment visas more than doubled. Most are considering the benefits and advantages of having an exit plan during economic and politically instability in Zuma country.

AFK Insider, the African news and travel website, reports that data, only released recently, revealed that South African demand for US EB-5 visas, which enable investors in American companies to obtain a green card, increased “noticeably” since 2014.

A US EB-5 visa can be attained by investing at least $1 million (or $500,000 for projects in a “targeted employment zone”) and creating more than 10 full-time jobs in the U.S. within two years.
The $500,000 at current exchange rates would require a Rand millionaire to make a R6.66 million investment.

The US EB-5 visa programme is administered by the United States Citizenship and Immigration Services (USCIS). It approves and designates Regional Centers, such as the LCR Overseas Regional Center, to attract foreign investment into the U.S.

Since the program was created in 1990, thousands of immigrants have received permanent U.S. residency, creating tens of thousands of jobs at no cost to the U.S. taxpayer.

AFK Insider quotes Doug van der Merwe of LCR Capital, a private equity investment firm that assists high-net-worth individuals in acquiring the visas through investments, as saying data from South Africa showed great interest in the EB-5 opportunity. Applications in 2014 amounted to 14 in total, with an increase to 40 during 2015 demonstrating the growing demand for the investment visas from South Africa, according to IOL.

“We think it’s likely that number will have doubled again in 2016, based on the increased interest we have recently experienced at LCR,” Van der Merwe said in reference to the 40 applications during 2015. “Political developments often drive demand in South Africa, and we are experiencing requests for information daily, rather than weekly, since the credit ratings downgrade. Previously, there was a spike in interest after Nenegate and during the Fees Must Fall protests,” he revealed.

South Africa’s recently downgrade to junk status is expected tol further increase demand to jump ship from SA’s collapsing economy. According to The South Africa 2017 Wealth Report there are over 40,000 dollar millionaires in SA. They all have the ability to launch applications for the programme.