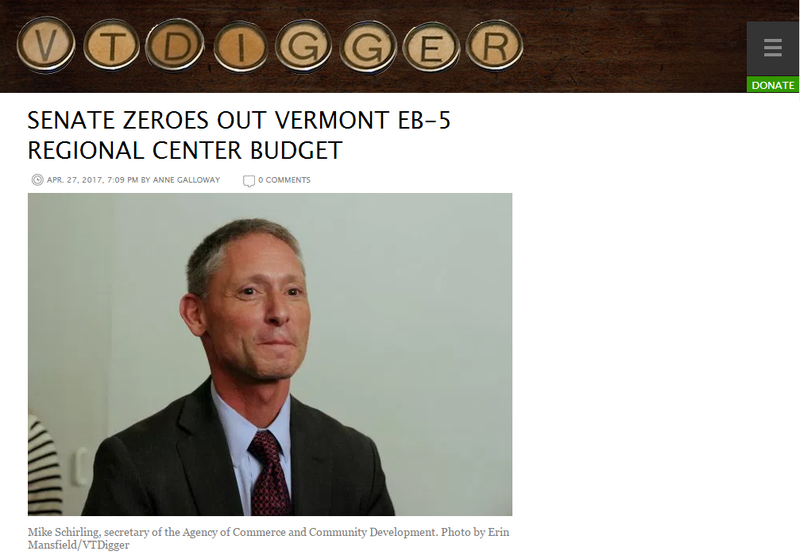 The budget for the Vermont EB-5 Regional Center has been zeroed out in the Senate appropriations bill.

A provision in the budget bill removes the commerce agency’s spending authority for the program. The defunding effectively guts the center, which no longer has any assigned staff. The Senate, however, allowed the center to keep one unfilled staff position.

Lawmakers and Scott administration officials, however, are reluctant to say the program has been shut down. Instead, they say the commerce agency has been charged with producing a plan for rebuilding the program’s promotional and marketing activities.

The Vermont-run EB-5 program took a major hit last year when federal and state regulators charged the developers at Jay Peak Resort with securities fraud and the misuse of $200 million in immigrant investor monies.

The fraud allegedly began in 2008 and was perpetrated over an eight-year period, during which state officials were responsible for overseeing $600 million in investor funded projects, including a massive redevelopment of Jay Peak, the Burke Mountain ski area, a biomedical facility.

The state, which was responsible for approve the projects, didn’t heed the warnings of a former Jay Peak business partner in 2012, and it wasn’t until 2014 that state officials began investigating allegations of fraud, in part because of stories published by VTDigger.

Sen. Patrick Leahy, D-Vt., Gov. Peter Shumlin and several high-level state officials helped to promote the Jay Peak projects to investors and defended the developers when questions were raised about allegations of fraud in 2014.

After the SEC brought charges in April 2016 against Bill Stenger, the former CEO, and Ariel Quiros, the former owner of Jay Peak, the Vermont EB-5 Regional Center came under scrutiny. Last summer U.S. Citizenship and Immigration Services, which approves local EB-5 centers across the country, asked the Vermont program to resubmit an application to continue operations.

USCIS required state officials to provide evidence of oversight. Documents obtained by VTDigger show that the federal agency threatened to terminate the program if the evidence was insufficient.

Meanwhile, the regional center has continued to operate, according to Michael Schirling, the commerce secretary. He insists that the center is in no danger of folding.

“The folks that are in it are the ones we’re here to support,” Schirling said. “However their projects unfold we hope they do well.”

The only project left in the program is Mount Snow, according to Schirling. At one point, there were 15 projects in the regional center’s program, eight of which were affiliated with Jay Peak.

Schirling, who was hired to lead the agency 12 weeks ago, was not aware of the Senate provision that requires a study and eliminates the center’s budget.

“The Legislature needs to give us more time to unpack,” Schirling said. “I don’t know where we’re headed with all this. The deeds of the past are not ours.” 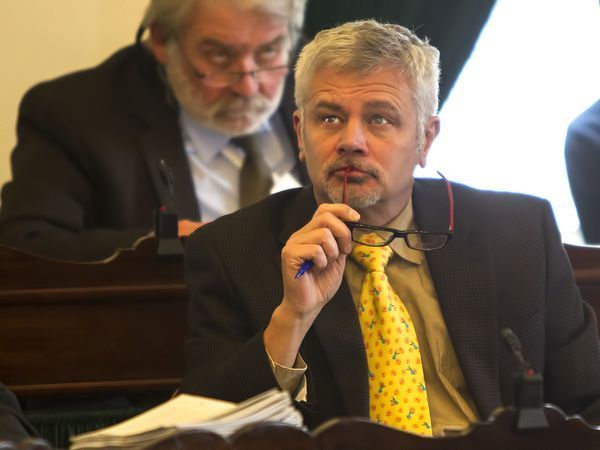 Sen. Richard Westman, R-Lamoille, listens to a colleague in the Senate.

Senate President Pro Tem Tim Ashe says the regional center continues to have a public relations problem and senators can’t support investing more money in the program until that issue can be overcome.

“If someone Googles Vermont and EB-5, some of the stories they’re going to read aren’t going to be very favorable,” Ashe said. “The reason the money isn’t in the budget for ACCD [the Agency of Commerce and Community Development] this time is a worry is that we don’t want to be imagining that in our current state of play that a market and promotion is really ready for prime time in light of the hole we have to dig out of in terms of perception of the program.”

Ashe said he can’t predict whether the regional center will be shut down. “I can only say I don’t believe the Senate Appropriations Committee felt we should be pledging state dollars for marketing and promoting the program because we’re concerned about the damage that has been done.”

The Senate began defunding the regional center last year against the wishes of the outgoing Shumlin administration. In addition, Ashe led an effort to strengthen the regulatory framework for the program in state statute. The Legislature ultimately gave the Vermont Department of Financial Regulation the authority to oversee the securities and financial aspects of the program.

Patricia Moulton, the former commerce secretary, opposed the statutory changes, Ashe said, “for fear that that would make the program seem like it had not been run very well.”

“Some of us said, yes that is a problem, we have a marketing problem across the country now and across the globe,” Ashe continued.

This legislative session, the newly elected Scott administration has pushed to keep the state EB-5 program going on life support with a $60,000 budget for staff to attend conferences.

In the past the regional center budget was about $235,000 a year and it was supposed to be supported by fees paid by developers. The Jay Peak developers, however, never paid fees to the state for the program, and it was largely subsidized by taxpayers.

Now, without support from the commerce agency, the regional center is hamstrung.

That doesn’t mean, however, that the program is dead — yet. The agency has a year to come back with a proposal for rejuvenating the regional center.

“I think clearly what our committee wanted was come back with a plan, give us a direction, tell us how you’re going to help businesses that need this capital,” Westman said.