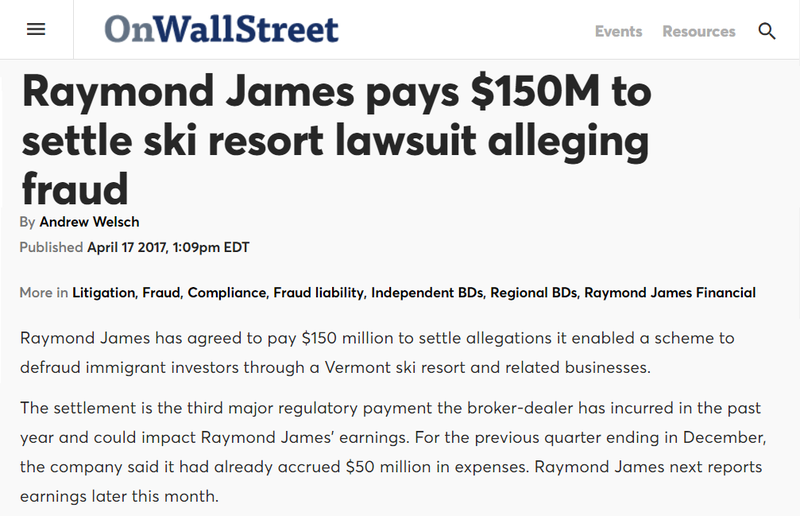 Raymond James has agreed to pay $150 million to settle allegations it enabled a scheme to defraud immigrant investors through a Vermont ski resort and related businesses.

The settlement is the third major regulatory payment the broker-dealer has incurred in the past year and could impact Raymond James' earnings. For the previous quarter ending in December, the company said it had already accrued $50 million in expenses. Raymond James next reports earnings later this month.

The alleged misconduct has already cost Raymond James tens of millions of dollars in legal expenses. An ex-branch manager has also lost his job at the firm. The settlement with an SEC-appointed receiver, attorney Michael Goldberg, was announced Thursday and is subject to a judge's approval.

"Most [of the investors] are being put in the position they would have been had there not been a fraud, and that was our goal," Goldberg says.

The alleged misconduct has already cost Raymond James tens of millions of dollars in legal expenses.

The scheme came to light in April 2016 when the SEC filed charges against Ariel Quiros for allegedly misusing about $200 million in funds raised from immigrant investors for projects tied to Jay Peak, a ski resort in northern Vermont. The regulator appointed Goldberg as a receiver to oversee the business and pursue legal actions to recover investors' funds.

The SEC alleged that Quiros solicited funds over an eight-year period from hundreds of foreign investors seeking permanent residency in the U.S. through the federal EB-5 program, which opens a path to immigration for foreigners wishing to invest in the U.S.

Quiros used Raymond James brokerage accounts which were overseen by his then son-in-law, Joel Burstein, a former Raymond James branch manager in Coral Gables, Florida. Quiros' attorney did not return a request for comment.

Raymond James should have caught wind of the misconduct from the get-go, according to the complaint.

Goldberg says that Quiros bought the property from a Canadian company that had solicited funds from investors for construction projects at the ski resort.

"At the time of the purchase, the seller had $23 million of EB-5 money in escrow, to use for the construction," he says. "When they forwarded that money to Raymond James, they sent a letter saying this is escrow money. It doesn't belong to us and it is to be used solely for construction."

Yet on the same day that the funds were wired to Raymond James, they were then transferred to Quiros' personal accounts, says Goldberg, who is the co-chair of the Fraud & Recovery Practice Group at Akerman, a law firm.

These funds as well as additional money raised later on were misappropriated, diverted elsewhere or used to cover Quiros' personal expenses, according to the SEC. Raymond James also provided margin loans which used investor funds as collateral.

Raymond James deserves credit for how it handled the case, the plaintiff says.

Even as he sought to recover lost funds, the Fort Lauderdale, Florida-based Goldberg also had to oversee the ski resort, which was still operational. "This is not your normal receivership," Goldberg says. "In most receiverships it's just a liquidation."

The business was an ongoing concern – with employees and customers – and that took a great deal of effort, he says. Secondly, there were immigration issues.

"These investors, most of them are equally focused on their immigration status as they are [on] the financial status of the case," Goldberg says.

Though the money aspect of the case has been relived, Goldberg says that they are also trying to get Congress to provide relief to immigrant victims of fraud.

While Goldberg pursued his case against Raymond James, the firm was hit with other regulatory penalties.

FINRA fined the St. Petersburg-based firm $17 million for systemic failures in its anti-money laundering programs in May 2016. It was the biggest penalty the regulator had dished out for such violations, a spokeswoman said at the time. In the same action, FINRA also fined Raymond James' former AML compliance officer, Linda Busby, $25,000 and suspended her for three months.

Of the settlement with Goldberg, the firm said it "worked diligently" to structure a fair agreement. "We believe this resolution is fair and representative of our commitment to redressing the victims’ losses in this case," General Counsel Jonathan Santelli said in a statement.

Raymond James deserves credit for how it handled the case, Goldberg says.

"I've been involved in a lot of cases, and typically companies will dig in and fight it out for years," the attorney says.

While it's unusual for a plaintiff to give kudos to the defendant, Goldberg says "I could not be completely honest if I did not give them credit."

The settlement also covers Burstein. He resigned from Raymond James in December, according to a note in his FINRA BrokerCheck file. Burstein's attorney could not be reached for comment. A company spokesperson confirmed his departure from the firm.

Raymond James also said it has made "significant enhancements" to its compliance and supervisory programs, which include hiring a new chief AML officer, training for all associates and substantial hiring of new AML associates.