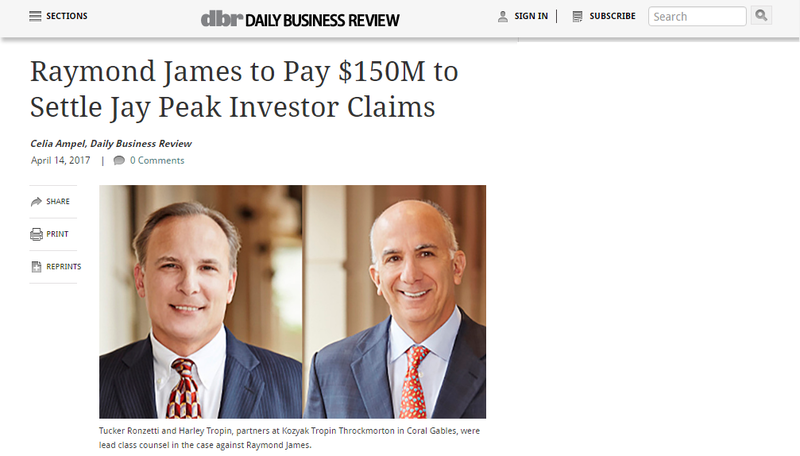 The St. Petersburg-based financial services company faced claims that it aided and abetted the misuse of $200 million in funds invested through the EB-5 visa program, which helps foreigners obtain U.S. residency in exchange for a $500,000 investment in a job-creating enterprise.

The money was supposed to fund the expansion of Vermont's Jay Peak ski resort and related projects, but it was diverted by resort owner Ariel Quiros of Key Biscayne and his Vermont business partner Bill Stenger, according to Securities and Exchange Commission allegations. Because the projects weren't completed, investors feared losing their green cards.

Raymond James was a broker for bank accounts holding investor funds and helped Quiros raise $350 million through the EB-5 program. The accounts were managed by former broker Joel Burstein, Quiros' then-son-in-law, and investors claimed Burstein and former Raymond James manager Frank Amigo aided a fraud by giving Quiros margin loans collateralized with the EB-5 funds. The settlement fund will be managed by Jay Peak receiver Michael Goldberg of Akerman in Fort Lauderdale, who will use it to complete construction projects so that investors have a chance to secure unconditional green cards. Investors who put their money into construction projects that are "no longer feasible" will receive full refunds, according to Raymond James. The funds will also repay vendors and contractors.

"We believe this resolution is fair and representative of our commitment to redressing the victims' losses in this case," Jonathan Santelli, Raymond James executive vice president and general counsel, said in a statement. The company also said it has increased its anti-money laundering safeguards in the past several years.

Kozyak Tropin partners Tucker Ronzetti and Harley Tropin said the settlement was notable for its speedy resolution. After the attorneys' initial investigation led them to file the lawsuit in May 2016, they joined forces with other attorneys who had filed similar lawsuits across the country.

"We had a focused group working in tandem to gather the evidence and build a case against Raymond James," Ronzetti said. "Once that started coming together, the case became very strong, and I think the writing was on the wall."

Goldberg had been negotiating with Raymond James as early as July 2016, and Kozyak Tropin joined the negotiations in the past few months, culminating in a two-day mediation before Bruce Greer in Miami.

part of the terms of the settlement, Raymond James will make the bulk of its payment immediately after an order is entered barring claims against the company. Ronzetti said it's unusual for payouts to be made without a requirement that appeals have been exhausted, but class counsel was motivated to help investors worried about their immigration status, particularly those who invested in projects that won't meet EB-5 job-creation requirements.

"We wanted to get them cash, and get them the cash right away so they could move their money into another program and get a green card," Ronzetti said.

The EB-5 program is set to expire April 28, but an extension is pending. Lawmakers are considering increasing the program's investment threshold to $1.35 million, adding to pressure for class counsel to move quickly, Ronzetti said.

The attorneys said U.S. District Judge Federico Moreno and Magistrate Judge John O'Sullivan also helped organize the case and drive it forward quickly, with the cooperation of the receiver, the class, the SEC and even Raymond James.

"To their credit, I think Raymond James realized once they saw the evidence of what their former employees had done, they stepped up and decided to repair some of the damage," Tropin said.

Raymond James was represented by Stanley Wakshlag, Deborah Corbishley and Janelle Ans of the Kenny Nachwalter firm in Miami.

The financial services company has already paid $4.5 million of the settlement amount to the receiver to settle claims filed by the state of Vermont. The proposed settlement is subject to approval by U.S. District Judge Darrin Gayles in Miami, who presides over the SEC case.