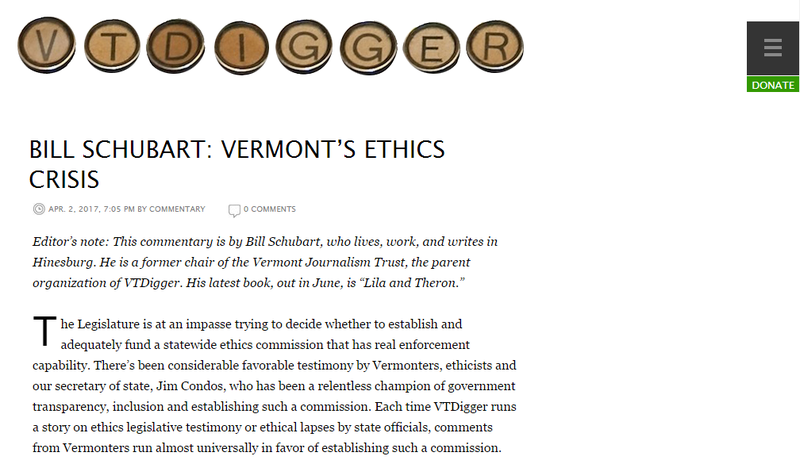 The Legislature is at an impasse trying to decide whether to establish and adequately fund a statewide ethics commission that has real enforcement capability. There’s been considerable favorable testimony by Vermonters, ethicists and our secretary of state, Jim Condos, who has been a relentless champion of government transparency, inclusion and establishing such a commission. Each time VTDigger runs a story on ethics legislative testimony or ethical lapses by state officials, comments from Vermonters run almost universally in favor of establishing such a commission.
Legislative arguments against it are unconvincing:

• What if an ethics commission ran amok and looked for self-serving behavior where there was none?

• An ethics commission would not have prevented any of the recent malfeasance, etc.

Vermont is one of only three states with no central ethics infrastructure. The Center for Public Integrity, in partnership with Global Integrity, has conducted a comprehensive assessment of state government accountability and transparency. The project uses extensive research by reporters in each state to grade and rank the states based on existing laws and analysis of how well they are implemented. This is a carefully researched report with a comprehensive explanation of each of 13 categories.

Vermont ranks 50th of all states on the Ethics Enforcement Agencies category.

For the third time in six years, Vermont has been named No. 1 in America … as the riskiest state for major embezzlements. And Vermont has some of the shorter prison sentences for those caught dipping into the till, according to the latest annual report by Marquet International. A six-year snapshot shows Vermont is the most likely to lead the list for embezzlements among the 50 states and the District of Columbia.

While we are mostly good people, we’re also fallible. We’ve seen a spate of recent embezzlements in the municipal sector. We’ve seen government officials pirouette from their office to earn more, working for those they oversaw. The alleged McAllister scandal trudges toward trial, the EB-5 Jay Peak scandal is the largest in our 225-year history and one of the largest in the SEC’s own history.

A few examples in the executive, legislative and municipal arenas:

• Coventry: $876,000 missing.
• Hardwick Electric: The largest municipal embezzlement in Vermont history, more than $1.6 million.
• Vernon: recent allegations and state police investigation.
• Former Sen. Norm McAllister sexual allegations.
• Jay Peak EB-5 scandals.
• Brent Raymond, Vermont’s EB-5 director resigns and takes a job with Mount Snow, where he will manage two EB-5 immigrant investor funded projects.
• Becky Fu, the manager of international trade and investment for the state and a former member of the Vermont regional center staff, left to take a job with Trapp Family Lodge, which is a recipient of EB-5 immigrant investor funds. The Von Trapp family has sought $22 million in EB-5 funds.
• Alex MacLean’s leap from Shumlin aide to Jay Peak employee in a matter of days would have been prevented were there an ethical code in place and an adequate enforcement arm.
• Executive branch efforts to impede the press’ FOIA requests for emails about MacLean’s transition might have been appealed to an ethics commission for review. VTDigger’s lawsuit to obtain public records, supported by the ACLU-VT, might not have occurred.
• Sen Dick Mazza’s failure to report rental income.
• Possible unaudited expense accounting fraud.

As a commentator who has addressed ethical issues in prior VPR and press commentaries, I was asked to testify in Senate Government Operations and was challenged as to how an ethics commission could have prevented the $200 million EB-5 fraud perpetrated on 836 investors from 74 countries. Had we had a real ethics commission, the immigration lawyer working on behalf of suspicious investors in 2014 would have had a place to go to ask for help. At first, the state denied any responsibility and the scandal metastasized. Two governors, a senator and an agency secretary might have been warned not to represent that the investors’ funds were being audited appropriately by the state agency that was, at that time, also charged with promoting the program. The following year, the state learned that the SEC was waist-deep into an examination of massive fraud.

The “moi?” response when elected and appointed Vermont officials are deemed tainted by this scandal that took an SEC investigation to uproot is an embarrassment. At the least, an ethics commission would have been a point of entry for those with questions about oversight.

An effective ethics commission backed by an ethics canon is foremost a metaphorical conscience, secondly a practical resource for those elected to serve Vermonters, providing leaders with clarity on acceptable behavior, and, lastly, it is an enforcer of its guidelines, adjudicating the difference between public service and self-dealing. Like most preventive actions, it would pay for itself many times over. Can we honestly say that in the myriad state contracts and employee expense vouchers there is no self-dealing? The cost of defending or remediating ethical lapses certainly exceeds the cost of an effective ethics commission.

Legislative waffling on establishing ethical guidelines and a body to interpret and enforce them is, in itself, suspect. People, businesses and institutions all have laws and precepts they must follow. It should be no different in a citizen legislature where the people’s business is conducted. We’re not special. We’re imperfect beings, trying to make our way in a complex and challenging world. We need guide posts.

Although most Vermonters favor establishment of an ethics commission with investigative and enforcement powers, the current bill (S.8) largely ignores what Vermonters are asking for, doing little more than providing legislative cover for inaction. It calls only for a part-time director and someone in human resources to draft ethical guidelines. There’s no enforcement capacity. Malfeasance is referred to the Senate or the House for peer action, even though our elected leaders have not fared all that well historically in policing themselves.

A real ethics commission should not cost more than $350,000, a small price to pay to assure Vermonters that their elected officials are serving them and not themselves. It must have jurisdiction over the Legislature and executive branches as well as elected municipal officials. It should have investigative and prosecutorial authority, referring criminal matters to the state Attorney General’s Office.

In a time of widespread citizen mistrust of their government institutions, what could be more important than re-establishing that trust? Trust in American institutions is eroding. The approval rating for our highest legislative body is under 18 percent. Our highest judicial body has wrought havoc with the democratic electoral process. The projected budget for an election 18 months away is estimated at five plus billion dollars, or what the Legislature is planning to pass for Vermont’s 2018 budget.

We’re supposed to be a nation of laws. Statutes, regulations and governance conventions codify the continuum of Americans’ ethical beliefs and guide our decisions as we work to maintain civility. When things fall apart, it’s usually due to arrogant abuse of power or the naive “gee-whiz, we’re all honest” mindset – which is uncomfortably close to willful ignorance. The former was exemplified at the outbreak of the EB-5 scandal, which we still pretend didn’t happen.