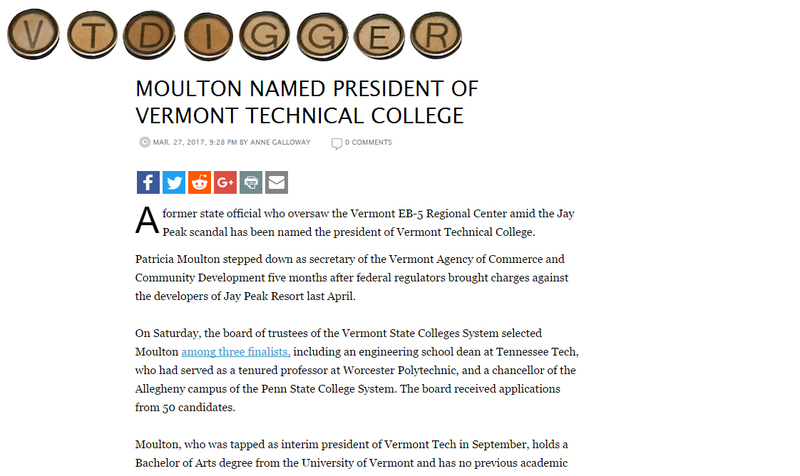 A former state official who oversaw the Vermont EB-5 Regional Center amid the Jay Peak scandal has been named the president of Vermont Technical College.

Patricia Moulton stepped down as secretary of the Vermont Agency of Commerce and Community Development five months after federal regulators brought charges against the developers of Jay Peak Resort last April.

On Saturday, the board of trustees of the Vermont State Colleges System selected Moulton among three finalists, including an engineering school dean at Tennessee Tech, who had served as a tenured professor at Worcester Polytechnic, and a chancellor of the Allegheny campus of the Penn State College System. The board received applications from 50 candidates.

Moulton, who was tapped as interim president of Vermont Tech in September, holds a Bachelor of Arts degree from the University of Vermont and has no previous academic experience. As secretary of the commerce agency, Moulton helped to attract new companies to the state and helped to expand many local businesses. She created a comprehensive economic development strategy that has led to millions of dollars in grants for the state. Moulton was previously the commissioner of the Economic Development and the Department of Labor.

Jeb Spaulding, the chancellor of the Vermont State Colleges, said the board of trustees unanimously “coalesced” around Moulton because “they thought she was the right person.”

“Pat Moulton is a qualified and demonstrated and efficient leader,” Spaulding said.

He said she “passed the test as interim president.”

He said Moulton would provide the “continuity of leadership” needed at VTC and will help to build relationships between the college and local businesses. Since she took the helm last fall, Moulton has improved morale, Spaulding said. Her salary will be $150,000 a year.

Moulton takes the job at a tumultuous time at the Vermont State Colleges. The colleges have a combined operating deficit of $4 million a year. In his budget, Gov. Phil Scott siphoned money from the K-12 public education system to put the colleges in the black. That idea was rejected by the Legislature. Instead, the House is looking to fund the colleges by tapping $2 million from a special fund for student scholarships.

The legislative funding is essential, Spaulding said, because the colleges enroll more Vermonters than all the other colleges in the state combined.

Spaulding said the Vermont State Colleges System has reduced spending dramatically since 2012, but that the cuts weren’t enough to counteract declining enrollments.

The colleges have eliminated funding for retiree health insurance, asked employees to take a 20 percent cut in pension contributions and have asked workers to pay higher health care deductibles. But the structural deficit remains.

“We are asking lawmakers to recognize that we are a critical institution for Vermonters and we’ve done the heavy lifting no one else has done,” Spaulding said.

Spaulding, who served Shumlin as the secretary of the Agency of Administration, said Moulton wasn’t to blame for the alleged fraud at Jay Peak.

“I appreciate people’s concern with what happened at Jay Peak, but that was not Pat’s doing,” Spaulding said. “I don’t believe any fault was attributed to Pat in the legal process.”

The Vermont State Colleges board of trustees includes former Gov. Peter Shumlin and several former members of his administration, Aly Richards and Mike Pieciak, the commissioner of the Department of Financial Regulation, who is litigating the state’s case against Bill Stenger and Ariel Quiros, the developers of Jay Peak.