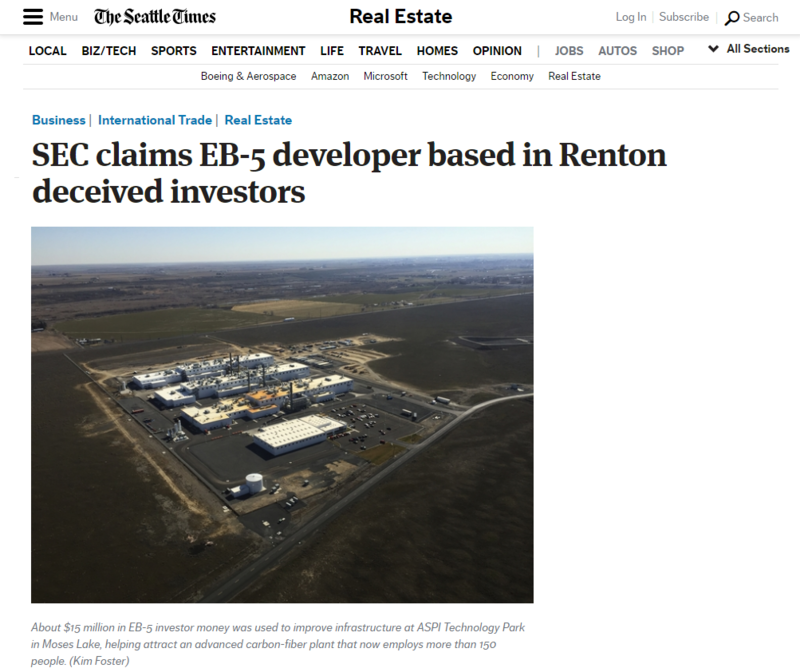 Two years ago The Seattle Times detailed problems with the federal EB-5 program that lets foreign investors obtain a green card for U.S. residency in exchange for putting $500,000 into a job-creating project here. Although Congress created the program to channel money to economically disadvantaged areas, reporter Sanjay Bhatt’s stories showed most of the billions invested locally flowed to hot spots such as downtown Seattle.

One project that was working as intended, the series reported, was the ASPI project in high-unemployment Grant County — millions of dollars from Chinese investors built a Moses Lake industrial park where a new, high-tech plant with more than 150 employees makes carbon fiber for BMW’s electric cars.

A lawsuit filed last week by the Securities and Exchange Commission accuses industrial-park developer Andy Shin Fong Chen and his Renton-based Aero Space Port International Group (ASPI) of deceiving 29 investors from whom he raised about $14.5 million.

The suit comes against the backdrop of an ongoing national crackdown by the SEC against EB-5 program developers or their agents. Locally, that scrutiny in the past two years has yielded settlements in two civil lawsuits and guilty pleas in two cases with criminal charges.

The civil suit against Chen claims he spent “virtually all of the funds … to engage in personal stock trading, satisfy margin calls, pay ASPI’s operating expenses, make lease payments on a luxury automobile, fund other businesses he controlled, and support other EB-5 Program Commercial Enterprises.”

He is also accused of misleading U.S. Customs and Immigration Services about the investors’ eligibility for residency.

Chen, in an interview, said the SEC recently offered to settle its case against him for $75,000 or less but “we rejected it, because we didn’t do anything wrong.”

“We are going to fight back,” he added.

Chen and ASPI have raised EB-5 money through several limited liability companies; the one at issue in the lawsuit is Washington Economic Development Capital III (EDC III).

Chen said the EDC III money was used appropriately, loaned to the development entity that built the last of four buildings at the ASPI industrial park.

He said the SEC has investigated ASPI for three years and examined “about 8,000 pages of project and financial documents” provided by the company.

“It’s very frustrating,” he said, because “we did exactly what we said” in the documents that investors signed.

The SEC suit, however, contends Chen “commingled the funds” from EDC III with other money in several accounts. Some was invested via a TD Ameritrade account, and Chen kept the profits he earned from trading with the money. Other money went to pay for ASPI corporate expenses, personal expenses for himself or family members, and loans to his other businesses or family, according to the suit.

About $3.6 million also was transferred to two related but separate EB-5 enterprises he controlled, EDC I and EDC II, “in an effort to help those projects create the jobs they needed to secure permanent U.S. residency for other EB-5 investors. Thus, these funds were not used to create jobs for EDC III investors,” the suit alleges.

The suit also contends he made “materially false or misleading statements” to the Customs and Immigration Service because he didn’t accurately describe how investor money was being used.

Chen, however, contended that the money was not being diverted for any personal purposes but placed in “a corporate cash flow management account typical of any business with large cash flow.”

He added that “our project is done, the investment is secured,” and “the immigrant investors have submitted testimony and written confirmation to the SEC that they stand with the company and have no complaints about the management of the project.”

In Chen’s view, the SEC is examining EB-5 deals because “they just want to kill investor visas.”

He criticizes the scrutiny of his company, saying “obviously this is profiling” because “there’s no probable cause — they just decided to pick on us.”

The SEC suit seeks to bar Chen and ASPI from further participation in the EB-5 program and asks for unspecified civil penalties as well as return of “the funds and benefits obtained illegally.”

The best-known local case of wrongdoing with EB-5 money involves Bellevue developer Lobsang Dargey, who in January pleaded guilty to two felonies for diverting large sums after hundreds of overseas investors invested more than $150 million through his Path America companies.

The region’s most prolific EB-5 developer, Henry Liebman, agreed last June to pay $1.2 million to settle SEC civil charges that he’d used unlicensed advisers to recruit would-be immigrant investors into his projects. In a similar case, a Bellevue immigration lawyer got a $278,000 fine in April in a similar EB-5 case.

In a criminal case, an immigrant from China who had been living in King County pleaded guilty to visa-fraud charges after federal prosecutors in Los Angeles charged her with using stolen money from overseas to purchase a house on the Eastside and other U.S. properties.