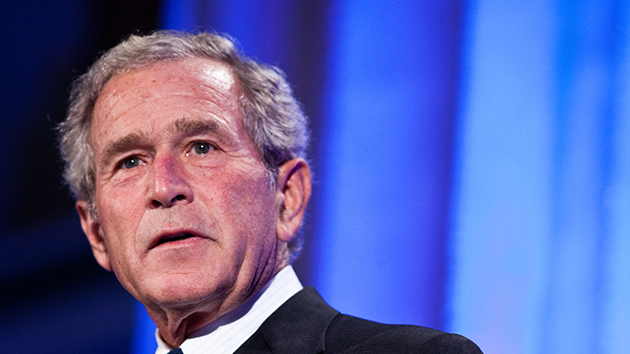 A California-based energy firm that federal prosecutors called a “Ponzi-like scheme” in a civil fraud case brought by the Security and Exchange Commission this week allegedly misused investor funds to pay President George W. Bush $200,000 to speak at a 2012 “energy summit.”

A federal fraud complaint alleges the head of Luca International Group, LLC misspent millions in foreign investor money for her personal use and that the company diverted more than half a million dollars to host a lavish 2012 conference for potential investors, which included a golf junket to Pebble Beach. The complaint says $200,000 was spent to bring a former U.S. President to speak at the event. Bush was identified in company promotional material as the keynote speaker for the summit, though it is unclear if he actually appeared. Bush’s speech fee was first reported by BuzzFeed.

The conference was billed as a “U.S.-China Energy Summit.” According to the federal fraud complaint, the event was intended to recruit more Asian investors for the embattled company.

On Wednesday, ABC News reported that Bush charged $100,000 to speak at a charity fundraiser for U.S. military veterans severely wounded in Iraq and Afghanistan, and former First Lady Laura Bush collected $50,000 to appear a year earlier. The former President was also provided with a private jet to travel to Houston at a cost of $20,000, the officials said.

Bush spokesman Freddy Ford did not respond to questions about the former President’s appearance at the so-called energy summit. But earlier, he confirmed that Bush accepted the payment for the veteran’s event. He declined to comment on the criticism over the $100,000 speaking fee from the veterans' charity.

In an e-mail statement, Ford said, “President Bush has made helping veterans one of his highest priorities in his post presidency.”

Former U.S. Presidents have turned the speaker’s circuit into a major source of income for their post-presidential years. Ronald Reagan faced criticism in 1989 for accepting $2 million for speeches in Japan. Bill Clinton has brought in more than $100 million in post-presidential speaking fees. Bush, similarly, recognized the opportunity, reportedly telling author Robert Draper he planned to "replenish the ol' coffers" on the lecture circuit. By their mere appearance at events, the former presidents can lend credibility to an organization.

Luca is one of hundreds of American firms certified by the Department of Homeland Security to participate in the immigration program, known as EB-5, that offers foreigners willing to invest $500,000 in selected U.S. businesses a chance at legal residency and a Green Card – a controversial practice that was the focus of an ABC News investigation in February.

It is unclear whether Luca derived that benefit from the 2012 speaking arrangement. According to the SEC complaint, Luca purported to be a thriving oil and energy business, and was able to raise more than $68 million from Asian investors seeking legal immigration to the U.S. But by March of this year, the complaint says, the firm had only $12,000 in its bank accounts.

The SEC says the company promised investors it would spend their money on the energy business. The complaint alleges that Luca improperly spent money on such marketing events as the Pebble Beach golf junket. And, it alleges that CEO Bingqing Yang misspent investors’ millions for her personal use, including the purchase of a $2.5 million home in suburban San Francisco, private school and music lessons for her children, and pool service and a family trip to Hawaii. Money was also used to pay dividends to older investors – hallmarks, the federal investigators said, of a Ponzi-type fraud scheme.

“Yang falsely claimed that Luca International was a profitable oil and gas drilling operation when it was really a Ponzi-like scheme preying on Chinese-Americans and EB-5 investors who lost millions of dollars while Yang lined her pockets,” said Jina L. Choi, Director of the SEC’s San Francisco Regional Office, in a press release issued this week.

The company disputed the allegations in a press release issued this week, saying it “made full disclosure of the risks of investing in oil and gas industry in their security offering documents, followed advice by legal counsel, and did not commit any Ponzi scheme as alleged by SEC.”

“There is no secret that the oil and gas industry is experiencing a global downturn, but that does not translate into fraud on Investors,” the company statement said.