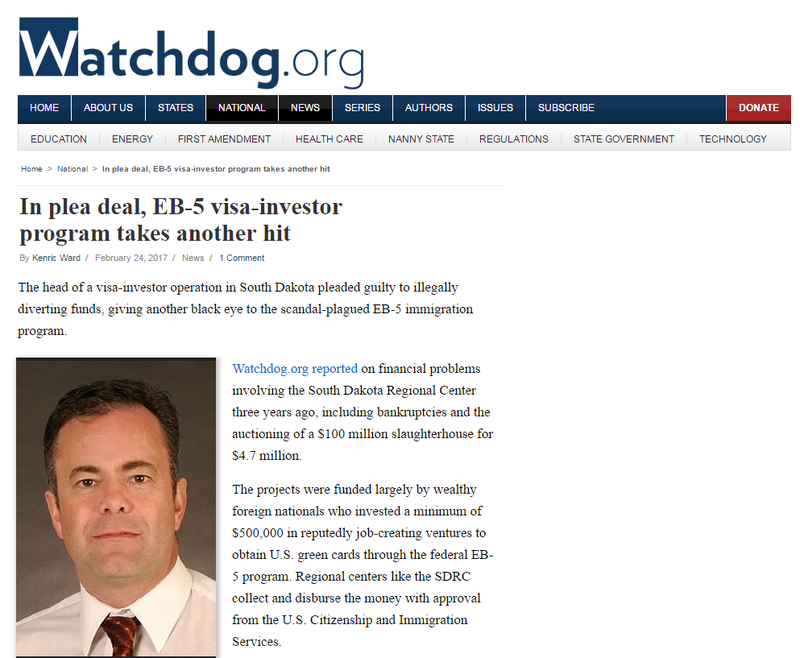 The head of a visa-investor operation in South Dakota pleaded guilty to illegally diverting funds, giving another black eye to the scandal-plagued EB-5 immigration program.

Watchdog.org reported on financial problems involving the South Dakota Regional Center three years ago, including bankruptcies and the auctioning of a $100 million slaughterhouse for $4.7 million.

The projects were funded largely by wealthy foreign nationals who invested a minimum of $500,000 in reputedly job-creating ventures to obtain U.S. green cards through the federal EB-5 program. Regional centers like the SDRC collect and disburse the money with approval from the U.S. Citizenship and Immigration Services.

Joop Bollen, 53, pleaded guilty to one felony count of illegally diverting funds from the SDRC. He was accused of funneling $1.2 million from a state account.

Authorities testified that he put back most of the money back, and Joop was sentenced to probation and fined $2,000.

David North, an EB-5 expert at the Center for Immigration Studies, called the fund diversion “a small side issue.”

“Scores of millions of dollars were lost by both the immigrant investors and by the state of South Dakota itself,” North said.

“Numerous EB-5 projects — including a massive beef slaughterhouse, a music hall and several dairy farms — failed and millions were lost as a result,” he said.

Bollen’s attorney, Reed Rasmussen, told the Associated Press the plea agreement was fair after the judge denied a motion to dismiss Bollen’s indictment.

South Dakota prosecutors accused Bollen of improperly transferring money from an SDRC account. In at least one case, the money was subsequently used to buy an Egyptian artifact, according to a court document.

In an earlier grisly twist to the SDRC saga, Richard Benda, a state official assigned to oversee the state’s regional center, killed himself as felony theft charges were being prepared against him in 2013.

Sen. Charles Grassley, R-Iowa, has called for tighter regulations or, failing that, abolition of the program.

“Absent any serious reform, the program should be eliminated, as his legislation with Sen. [Dianne] Feinstein [D-Calif.] would do,” a Grassley spokeswoman told Watchdog on Thursday.