The EB-5 World: Much Ado About a Lot 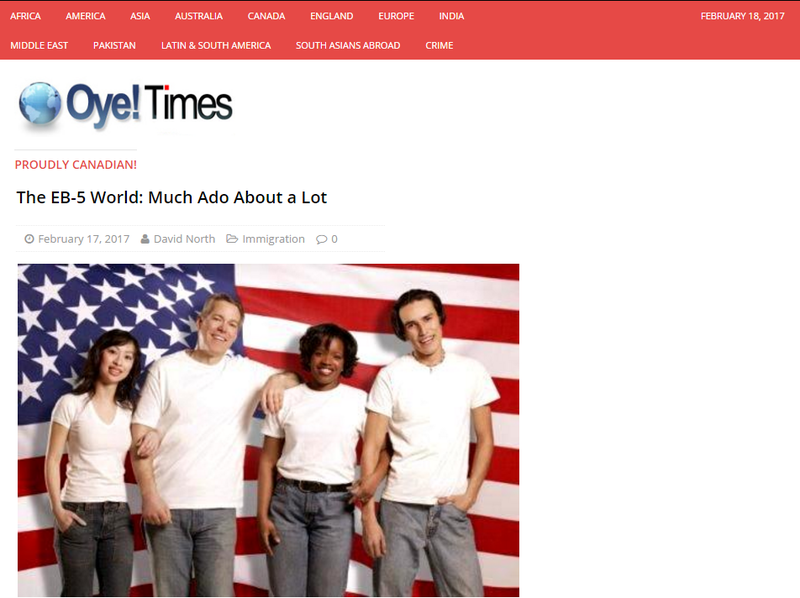 While our attention has been drawn to various immigration initiatives by the new White House, and the attacks thereon, a lot of things have been happening rather quietly in the world of the EB-5 (immigrant investor) program. For example:

Sen. Chuck Grassley (R-Iowa), chair of the powerful Judiciary Committee, who has been valiantly trying to reform the program, has decided that it is beyond redemption and has joined Sen. Dianne Feinstein (D-Calif.) in calling for its termination.

The Washington Post, in a lead editorial the other day, agreed with the two senators.

Joop Bollen, who was in charge of South Dakota’s disastrous part of the EB-5 program, has pled guilty in a sweetheart deal with the state that gave him two years probation and a $2,000 fine. Thus he got off nearly unscathed while saving the state’s establishment from embarrassments that might have accompanied a trial.

Grassley said, according to NBC News:

Unfortunately, despite its many flaws, EB-5 proponents are apparently content with the status quo, and that’s unacceptable. I was hoping that it would not come to this point, but absent serious efforts to bring about reforms, we need to take the necessary steps to wind down the program and completely mitigate fraud, abuse, and threats to our security.
The Post, which is routinely pro-migration, said this:

[T]he EB-5 program, which began a quarter-century ago as a well-intentioned plan to attract international capital to the United States, has morphed into a scandal-ridden embarrassment.

We now switch from the nation’s capital to South Dakota, which produced some of the scandals mentioned by the Post. The Sioux Falls Argus Leader reported that Bollen, who at the very least watched scores of millions of dollars of EB-funds disappear, pled guilty to a relatively minor criminal charge brought against him by the all-too relaxed local prosecutors.

We had, in earlier postings, reported how scores of millions of dollars were lost by both the immigrant investors, and by the state of South Dakota itself; how neither federal nor state authorities did anything about it; how the local Democrats had muffed their opportunities to make a major issue out of it; and how the death of a key player in the EB-5 schemes — he died of a shotgun wound to the stomach — was ruled by the state’s attorney general to be a suicide.

Very briefly, South Dakota secured a license from DHS to be a regional center to handle EB-5 funds. Bollen was put in charge. While still serving in that position, Joop Bollen (as a public servant) signed a state government contract with Joop Bollen (as a private citizen), giving the latter’s company the state’s EB-5 business, including fees to be collected later from the investors. This is well known, but was not part of the state’s prosecution; that dealt only with a small side issue amounting to about one million dollars.

Meanwhile numerous EB-5 projects — including a massive beef slaughterhouse, a music hall, and several dairy farms — failed and millions were lost as a result.