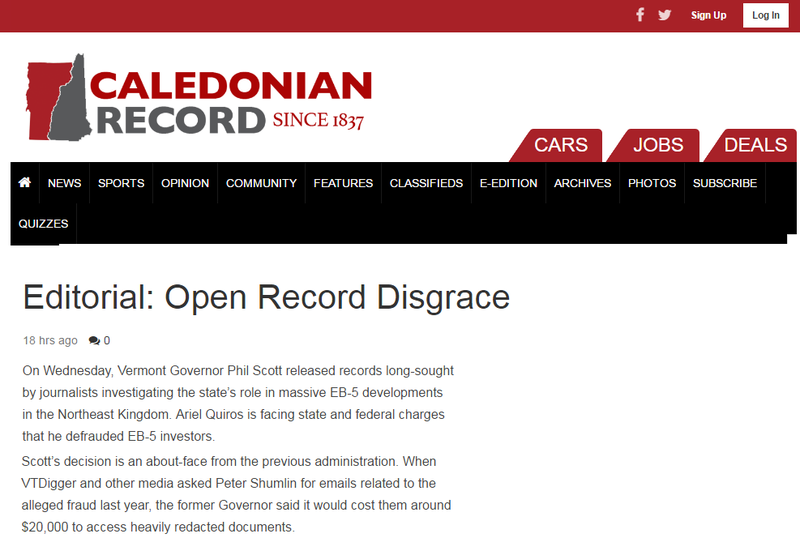 Scott’s decision is an about-face from the previous administration. When VTDigger and other media asked Peter Shumlin for emails related to the alleged fraud last year, the former Governor said it would cost them around $20,000 to access heavily redacted documents.

Reporters are interested in the emails for a lot of reasons… not least because Shumlin tried to have them deleted one day before the state and federal governments implicated Ari Quiros in the alleged EB-5 fraud. Shumlin, and staff members like Alex MacLean, were exceedingly cozy with Quiros and his business partner, Bill Stenger, as they attracted $350 million for investment into the NEK.

It’s so expensive to retrieve the emails, Shumlin would have had you believe, because his legion of lawyers had to go through them all first. He insisted that some of the records might be not be appropriate for public consumption under any of a number of 250 open record exemptions (trade secret, litigation, personnel, etc.).

The ceremonial citing of exemptions by agents of government is an important step because it’s the point at which state lawyers black everything out with their top-shelf sharpies (God forbid that Vermont residents become privy to brilliant trade secrets like… how to spend $200 million on a website that won’t ever work).

The system is actually quite clever. Lawmakers have devised every reason in the world to allow government to hide what it’s doing. That, in turn, justifies the hiring of the 1,000 lawyers employed by the state. Those lawyers sit around with nothing to do until some resident or reporter gets curious about the need for all the lawyers. A few record requests are made and - voila - the lawyers finally have something to do.

They take a few minutes with their sharpies and dutifully black out almost everything from “public” documents. They hand the now meaningless records down the assembly line to more taxpayer-funded lawyers who scrawl some meaningless reference to random open record exemptions. At this point the reference doesn’t matter because everything is blacked out anyway.

Of course the real problem is the 250+ exemptions to open records in Vermont. They have been weaponized by arrogant officials like Shumlin who know how easy it is to hide vast transgressions behind a six-pack of sharpies and endless exemptions.

In this case those sharpies and exemptions were deployed to keep a shocking state secret - Shumlin had no idea what he was doing. “It’s clear that what Shumlin administration officials were trying their hardest not to disclose is their incompetence,” said VTDigger attorney Tim Cornell.

But this is a textbook case for open record exemption reform. As ACLU attorney Lia Ernst explains, “the disclosures highlight the fact that the litigation exemption is far too blunt an instrument, allowing agencies to withhold records as relevant to litigation without requiring a showing that disclosure would have any impact whatsoever on the litigation.”

“In this case, for example, some of the records that the state chose to withhold reflected information already in the public record that could not possibly compromise its ongoing lawsuit,” Ernst said. “All too often, agencies withhold records because they can, without ever asking whether they should. The breadth of the litigation exemption unfortunately allows this result, severely undermining the accountability and transparency purposes of the public records act.”

Not exactly in keeping with the spirit of Article Six of Vermont’s Constitution that “That all power being originally inherent in and consequently derived from the people, therefore, all officers of government, whether legislative or executive, are their trustees and servants; and at all times, in a legal way, accountable to them.”

We’re thankful that a man of character and a champion of transparency is finally back in the Governor’s chair. But accountability from government agents shouldn’t depend on the benevolence of a good Governor. It should be the law.