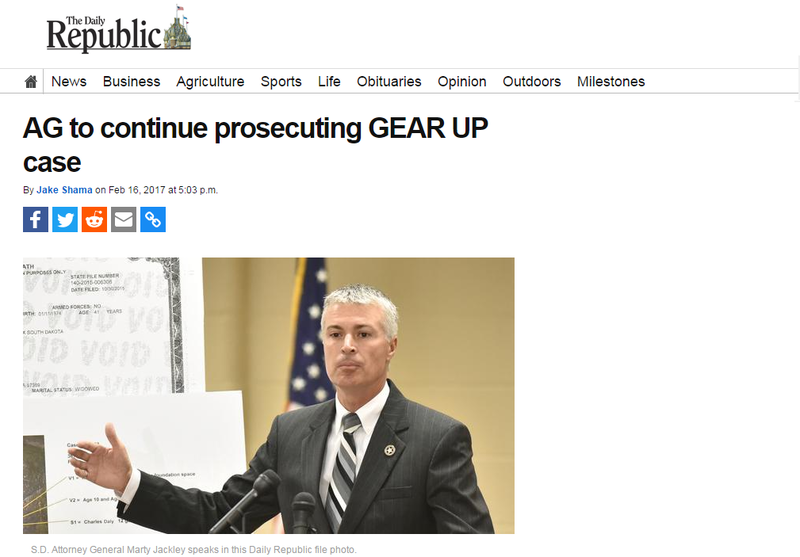 The GEAR UP case will continue to be prosecuted by the Attorney General's Office after a resolution to appoint a special prosecutor was tabled.

Senate Concurrent Resolution 8, which would have requested South Dakota's attorney general to appoint a special prosecutor to handle all criminal and civil cases regarding EB-5 and GEAR UP, was withdrawn last week.

The bill's sponsors noted the "grave consequences" from the two scandals and the government's "susceptibility to corruption, cronyism and nepotism."

Although that puts an end to the bill for this year, Nelson still thinks appointing a special prosecutor would be appropriate.

"We sponsors brought this as a direct response to the outrage we share with the voters over the brazen corruption in the (former Gov. Mike) Rounds and (Gov. Dennis) Daugaard adminstrations' EB-5 and GEAR UP scandals," Nelson said.

Jackley has been prosecuting the GEAR UP case personally, and he said cases resulting from the two scandals are being fully prosecuted.

"There is a felony conviction in the EB-5 matter and investigation, and a grand jury, at the request of the attorney general, has issued three indictments in the GEAR UP investigation and case," Jackley said. "These matters are being and have been investigated and prosecuted."

On Feb. 1, Joop Bollen, the former director of South Dakota's EB-5 visa program, was sentenced to two years on probation for a felony charge related to the diversion of more than $1.2 million from the program.

Stacy Phelps, a former GEAR UP administrator, Dan Guericke, Mid-Central's former director, and Stephanie Hubers, a former Mid-Central employee, still face charges related to the theft of more than $1 million by the organization's former business manager. A trial date has not yet been set.

Still, because Jackley was appointed in 2009 by Rounds, who served as governor from 2003 to 2011, Nelson said Jackley should coordinate with the United States attorney to identify an independent prosecutor.

By working with the U.S. Attorney's Office, Nelson said a prosecutor could have been identified without hiring someone new, which he said should have been done at the beginning of these cases.

"Because of the political entanglements and long interrelations with the attorney general and the Rounds and Daugaard administrations, many feel that an independent counsel should have been appointed from the onset," Nelson said.

The resolution would likely have been a temporary change with a limited scope, but Nelson said the bill's sponsors will continue to battle corruption.

"We continue to fight the culture of accepting and making excuses for such corruption. We continue to bring and support legislative efforts to combat the corruption, cronyism and nepotism that South Dakotans have noted in our state government," Nelson said.