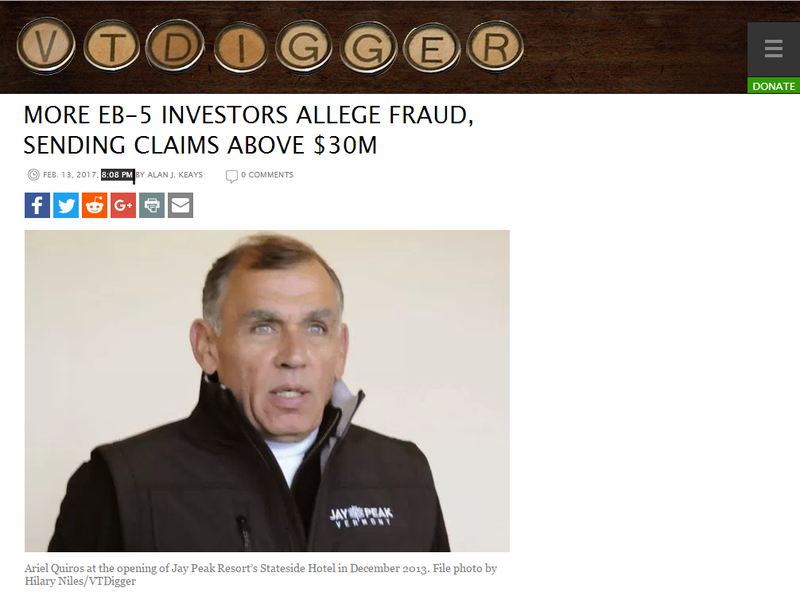 An attorney says he will shortly double the number of Chinese investors bringing a fraud lawsuit against Jay Peak owner Ariel Quiros and his former broker and brokerage firm.

The investors allege all three played a role in perpetrating a Ponzi scheme to defraud them of millions of dollars meant to fund expansion projects at the resort, as well as developments in nearby towns.

“Another lawyer has about 30 people, and that lawyer contacted me and asked to join this case,” Carlson said Monday. “This is a lawyer who had not filed anything yet and is going to be bringing her clients to me, and she will become co-counsel.”

The 61 investors, who each claim they are out their $550,000 investments through the federal EB-5 visa program, are seeking a total of $33.55 million in damages.

Immigrant investors in qualified EB-5 projects put up $500,000, plus a $50,000 administrative fee. An investor becomes eligible for permanent U.S. residency if that investment leads to the creation of 10 jobs.

Carlson said Monday of the additional plaintiffs joining the case, “It doesn’t make the case stronger, but it makes us important for Raymond James to deal with.”

He added that the Chinese investors in this case did not want to take part in a separate class action lawsuit brought by other investors in the same projects, which is also pending in federal court in Miami. 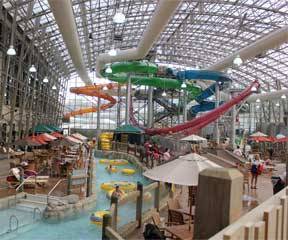 The Jay Peak water park was funded with EB-5 money. ​

“They feel their recovery will be greater if they are not part of the class,” Carlson said of the plaintiffs in his case.

Carlson also recently filed a response to a motion by Raymond James asking a judge to dismiss the case.

Raymond James, in its filing, denied wrongdoing and argued it has acted at the direction of Quiros regarding accounts at the brokerage firm.

Carlson responded that Raymond James is not being sued for “direct fraud,” but for its “aiding and abetting,” and negligence.

The attorney disputed what he described as Raymond James’ contention that it was entitled to “blindly follow” Quiros’ instruction because of his “apparent authority” over the accounts.

“This argument is contradicted by the factual allegations of the Complaint, which establish that Quiros alone did not have the authority to act for the General Partners of the Limited Partnerships,” Carlson wrote, “and that Raymond James and Burstein were aware of this lack of authority and of Quiros’s misuse of the funds invested by the Limited Partners.”

The regulators accuse the two men of misappropriating $200 million of the $350 million they raised for the development projects in northern Vermont, including a proposed $110 million biomedical research center in Newport that never materialized.

The lawsuit filed by the Chinese investors alleges Quiros bought Jay Peak Resort in June 2008 using EB-5 funds that were supposed to be kept in escrow for hotel projects.

As a result, according to the lawsuit, Quiros needed to acquire additional money to backfill the projects where he was taking money from earlier investors.

And, according to the lawsuit, Quiros siphoned off some of the money for his own personal expenses, including a $2.2 million condominium at Trump Tower in Manhattan.

The claims in the lawsuit include that Burstein — a manager of a Coral Gables, Florida, branch of Raymond James where Quiros kept Jay Peak investor funds — aided the Miami businessman and that the firm allowed a series of transfers to hide the shortfalls in funding for the projects.

A court-appointed receiver overseeing properties at the center of the state and federal legal actions against Quiros and Stegner has filed a separate lawsuit against Raymond James.

The cases are pending in Miami, which is where Quiros lives and many of his businesses are located.

The lawsuit brought by Chinese investors does not name Stenger as a defendant, unlike other legal actions stemming from the Jay Peak investment partnerships.

“He likely has no money,” Carlson said in November when the lawsuit was filed. “It just would be a waste of time.”