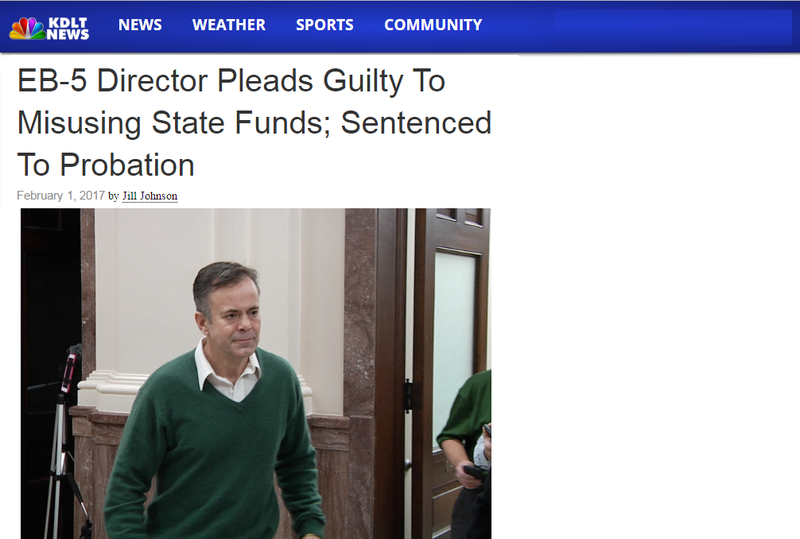 The Aberdeen man accused of misusing state funds in 2012 was sentenced Wednesday morning in a Brown County courtroom. Joop Bollen, the administrator of South Dakota’s EB-5 or investment-for-visa program, was given two years probation and fined $2,000.

It was in March of last year that Bollen was charged with five felony counts related to financial misconduct involving the EB-5 program.

Nearly a year after his arrest, as part of a plea agreement, Bollen pleaded guilty to one of those charges.

The South Dakota Attorney General says in February of 2012, Bollen unlawfully withdrew $300,000 from a security fund, which is required to have at least $1 million. Bollen returned the money days later, but was never given the authority to withdraw the money. Jackley says Bollen needed written permission from the state.

“The position I’ve taken as Attorney General is much like if you rob a bank. If you rob a bank and take that money, that is an illegal act. Even if you give it back or get caught and want to give it back, you still have misused or inappropriately disposed of a security interest,” said Jackley.

Bollen officially pleaded guilty to unauthorized disposal of personal property subject to security interest. But Jackley hopes a bill proposed in the legislature would soon make a similar crime a theft.

Jackley said, “The legislature had indicated that absent a mitigating circumstance, which don’t exist in this instance, it’s presumed probation.”

Jackley hopes that the state learns from this case if it continues to get involved in federal programs like EB-5.

“If our state is going to engage in these types of activities, which can have a benefit, we need to recognize that, that there won’t be federal oversight or work done to protect tax dollars and that work will need to be done by state authorities,” said Jackley.

Under the plea agreement, Bollen also agreed to testify if any other cases involving the EB-5 program should arise. Bollen’s partner and former Department of Tourism and State Department Secretary Richard Benda was also being investigated in 2013. It was deemed that Benda committed suicide in 2013 before charges could ever be filed by the Attorney General’s Office.