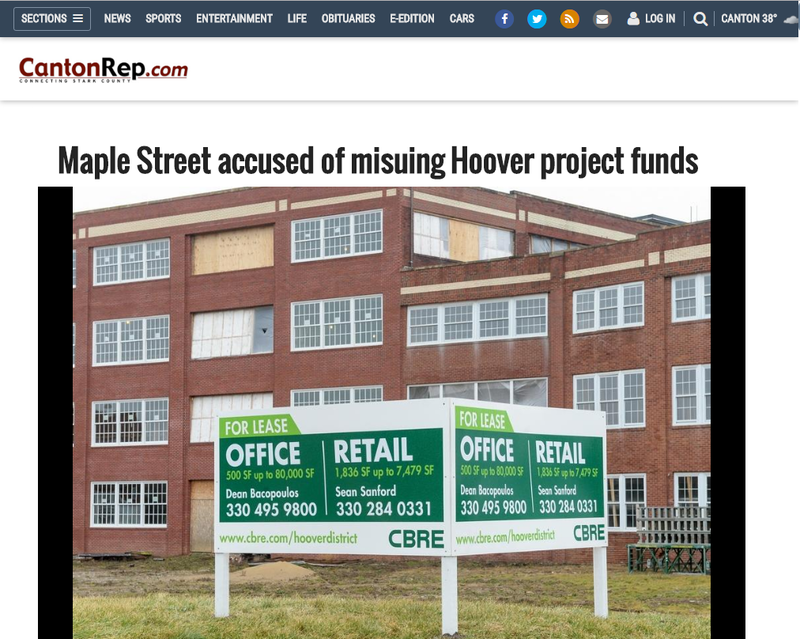 An investment group has filed a lawsuit that accuses Maple Street Investors, owners of the Hoover District project, of misusing part of a $36 million loan acquired through a federal program and intended solely for the project.

"Although projected to be completed in the fourth quarter of 2015, to date, the Hoover Project remains unfinished and the loan proceeds are not accounted for," according to the lawsuit CMB Infrastructure Investment Group X filed in federal court in November.

Stuart Lichter, who is leading the Hoover project, also denied the allegations when reached Tuesday. He is named as a co-defendant.

Plans to turn the former Hoover Co. headquarters into a mixed-use development with retail, restaurants and luxury apartments has been underway since at least 2013. The project's completion date has been a moving target. Developers originally said the project would be completed in 2014 before revising those estimates to 2015 and then last fall. Developers recently said the project at N. Main and E. Maple streets should be completed this year.

Lichter said Tuesday there was about "a year of work to do."

"We've been in business 40-plus years. We're knowledgeable people. We've gotten involved with many businesses without lawsuits. Anybody can sue anybody," Lichter said. "We feel strongly that we're in the right on this lawsuit and have done nothing inappropriate or wrong."

Attorneys for Maple Street and CMB could not be reached for comment Tuesday.

In May 2012, Maple Street borrowed $36 million in EB-5 funds from CMB. As part of that loan deal, Maple Street agreed to use the funds solely for Hoover, according to the lawsuit. In an authorization letter, Maple Street told CMB that the Hoover Project would be completed by the fourth quarter of 2015 and would cost about $70 million in private and public funds.

CMB alleges that $25 million of the $36 million loan "have been diverted without authorization, for unknown purposes and uses."

Those funds might have been redirected to a related project in Akron.

Lichter also owns and developed the new Goodyear world headquarters in Akron, as well as the East End, a mixed-use development created in the historic Goodyear campus.

At the same time that he sought funds from CMB for Maple Street's Hoover project, Lichter also sought $35 million for the Goodyear project, estimated to cost $252 million. CMB entered into loan agreements for both respective projects on May 7, 2012.
Maple Street received the funds, in a six-year loan, for Hoover District on Oct. 16, 2013.

As part of the loan agreement, Maple Street was to supply CMB with up-to-date information on their finances and the status of the Hoover project, according to the lawsuit. CMB says Maple Street failed to do so.

Lichter confirmed Maple Street loaned out the $25 million, but contends it was allowed.

"The loan documents allow it to be lent out, and they (CMB) understand that," Lichter said. "We've done nothing wrong here."

In its filing, CMB says it "does not know where the diverted loan proceeds were sent."

In the lawsuit, CMB questions whether Maple Street has the financial wherewithal and ability to complete the project and repay the loan. It accuses Maple Street of being in breach of the loan agreement and says that by diverting the $25 million, Maple Street is in default.

CMB is asking for early repayment of the $36 million, plus damages and interest. Maple Street, in its response, asks the court to dismiss the complaint.

Lichter said Maple Street did everything with CMB's knowledge and that its actions were allowed by loan documents in every other deal done with CMB.

CMB is trying to force early payment of a loan that is current and not in financial default, Lichter said.

The lawsuit is assigned to U.S. District Judge Sara Lioi in Akron. She set a series of filing deadlines for both sides and a trial date in April 2018.