Judge To Rule On Redaction Of EB-5 Records 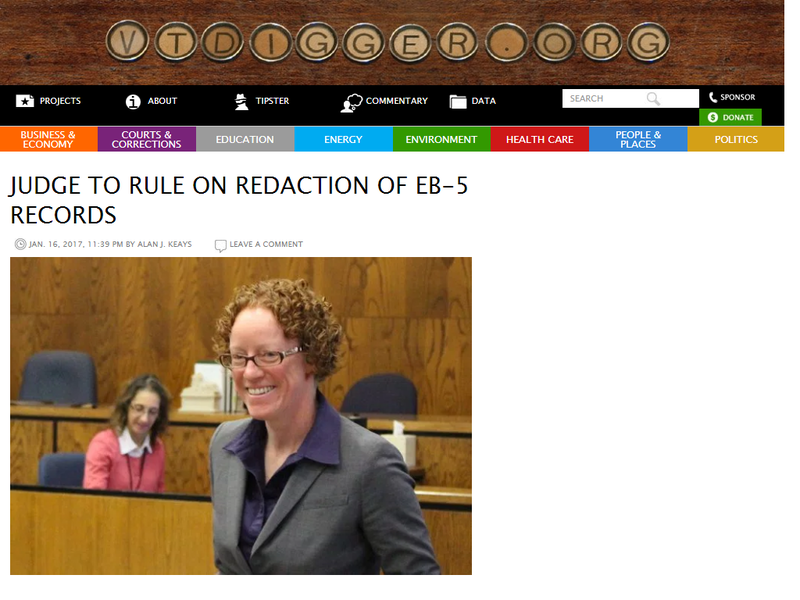 A judge will determine if state redaction of records about the state’s EB-5 program complies with public records law.

VTDigger requested communications between the Vermont EB-5 Regional Center and a federal agency. The state at first refused to provide the records, citing pending litigation. VTDigger and the Vermont ACLU sued in October. The state subsequently released the documents, but redacted more than 30 percent of the material, all of which pertained to Jay Peak Resort.

Last summer the U.S. Citizenship and Immigration Service asked the state-run regional center to respond to questions about oversight of the projects. VTDigger is seeking public access to those questions, and the state’s responses.

Washington Superior Court Judge Mary Miles Teachout will review the records in February after attorneys with the Vermont Attorney General’s office, which is representing the state, and attorneys representing VTDigger and the Vermont ACLU submit briefs and offer oral arguments.

Meanwhile, the Vermont Attorney General’s office has said it will charge VTDigger more than $200,000 for a sweeping request for records not already provided to the news organization.

The battle over documents between the state and VTDigger centers on access to records related to what regulators termed a “Ponzi-like” scheme spanning eight years by Jay Peak developers Ariel Quiros, the resort’s owner, and Bill Stenger, the ski area’s former president.

Attorneys for VTDigger and the state of Vermont met outside the courtroom prior to a hearing Thursday morning in Washington County Superior Court and agreed on how they hope to settle the lawsuit.

“We decided together that we’ll put it all in the hands of the judge to resolve,” attorney Tim Cornell, lead counsel for the case on behalf of VTDigger and its parent organization, the Vermont Journalism Trust, said after a brief hearing where the lawyers laid out their plan.

Teachout will review documents turned over to VTDigger by the state of Vermont in October. The 131 pages of records include 43 redacted in whole, and 10 partially redacted. Exemptions to Vermont’s Public Records Act for the redactions cited by state officials included personnel, pending litigation and proprietary business information.

The unredacted documents shed no new light into questions raised by the U.S. Citizenship and Immigration Service about Vermont’s EB-5 program and the role state officials played in overseeing the $400 million-plus developments in Newport, Jay and Burke.

Both sides will file briefs in support of their positions by Feb. 2. The state also agreed to provide VTDigger and the judge with a Vaughn Index, or a general description of the information redacted.

“They’ll describe redaction by redaction,” Lia Ernst, an attorney with the Vermont chapter of the American Civil Liberties Union, Cornell’s co-counsel, said after the hearing Thursday. The Vermont ACLU joined VTDigger in the lawsuit in late October.

The dispute leading to VTDigger’s lawsuit over the records began in August. That’s when federal officials raised questions about state oversight of the EB-5 program, with USCIS asking the state Agency of Commerce and Community Development to respond to an inquiry.

VTDigger submitted a public records request seeking all communications over seven days between the state Agency of Commerce and Community Development, including the Vermont EB-5 Regional Center, and USCIS.

The state refused to provide any of the documents in late August, claiming the records were subject to a “litigation hold,” and exempt from Vermont’s Public Records Act because they could become part of the state’s investor fraud lawsuit against Quiros and Stenger filed in April.

Attorney General Bill Sorrell issued a letter to state officials in October 2015, putting a litigation hold on all information regarding EB-5 and Jay Peak.

VTDigger, in its lawsuit, argues that in light of the federal inquiry the public has a right to know the status of the EB-5 Regional Center. The lawsuit contends the documents are not relevant to the state’s investor fraud case against Quiros and Stenger.

In November, the state said it would reconsider its earlier denial of the records, saying that circumstances changed. That’s because in September two Chinese investors in the Burke Mountain hotel project headed by Stenger and Quiros dropped their lawsuit against the state Department of Financial Regulation.

Following that reconsideration, the state released the 131-page package of documents with the redactions.

Just as the Shumlin administration was about to leave office, Anne Galloway, editor of VTDigger and the executive director of Vermont Journalism Trust, filed public records requests in December seeking communications, not previously provided to the news organization, from state officials and agencies, including the governor’s office, related to the EB-5 program and Jay Peak entities and officials.

Access to a record wouldn’t be denied simply because a document is on litigation hold, Assistant Attorney General Bill Griffin said Thursday. A litigation hold, Griffin added, preserves a document to prevent it from destruction while a case is pending.

“The exemption does not speak in terms of documents that are covered by a litigation hold,” Griffin said. “The test we apply is the one that’s in the access to records law, which is, is it pertinent to litigation.”

Griffin, in an email response Dec. 30 to a VTDigger records request, wrote that due to the scope of requests as well as the “deep overlay of legal consideration,” he initially asked for an extension to reply.

In the governor’s office alone, he wrote, there 12 email accounts for current employees and eight more for former employees. Based on preliminary searches, he wrote, the number of “potentially responsive” emails could be as many as 50,000.

At that point, he wrote, each document would need to be reviewed to determine if an exemption from the public records law applies. Assuming 3 minutes per minute would mean 150,000 minutes of review time, Griffin wrote, and at the charging rate of 57 cents per minute, the cost would be $85,500.

“So to respond to just part of this request would take one person one year,” Griffin said Thursday.

In the Agency of Commerce and Community Development, more than 100 accounts would need to be searched to comply with the request.

“One ACCD employee reports that a search of just his account using your search terms yielded more than 3,000 documents,” Griffin’s email stated. “This number is probably an outlier, but my guess is that a search of all ACCD accounts of current and former employees would yield about 45,000 distinct documents.”

And those records would take longer to review for exemptions because of statutory protections provided to the private businesses, he wrote. As a result, the email stated, a review of 45,000 documents at 5 minutes per record would result in 225,000 minutes of review time, and at a charging rate of 57 cents per minutes, the bill would be $128,250.

Rather than calculate more formal estimates, he said another option would be to have a meeting to try to refine the search.

“We agreed to narrow our request and they are going to get us a response within a week,” Cornell said after that meeting.

In a separate public records request Thursday to Secretary of State James Condos asking for all his EB-5 and Jay Peak related emails he provided about 20 emails to VTDigger within about 20 minutes. He said he used the terms “EB-5” and “Jay Peak” to search through his 37,000 emails.

None were exempt under the public records law.

Griffin said the speed at which the secretary of state’s office responded might not be an apt comparison in this matter.

“Part of what’s going on, I’m assuming, is that the governor’s office has more involvement in the EB-5 program than the secretary of state’s office,” he said, adding that other parts of state government, like the Department of Financial Regulations, would have even more emails.