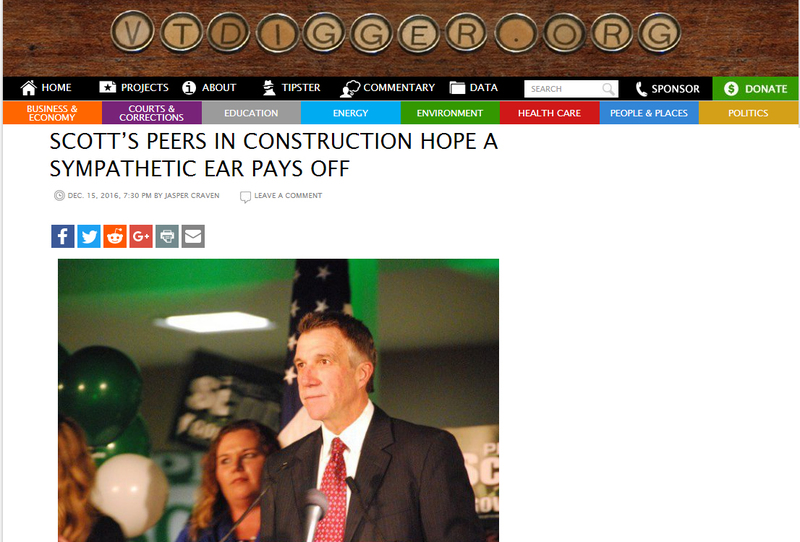 Phil Scott at his campaign announcement on Dec. 2, 2015. The Associated General Contractors of Vermont annual conference was going on at the same time in the same hotel.

When Phil Scott kicked off his gubernatorial campaign with a festive, balloon-filled gathering in a hotel ballroom last December, just one floor up dozens of his biggest supporters were holding a celebration of their own.

Members of the Associated General Contractors of Vermont were upstairs, directly above the ground-floor Scott event, holding their annual conference. Many members of the trade group — which consists of more than a hundred excavating, building and related companies — generously supported Scott’s successful gubernatorial bid.

The proximity of the two events at the Sheraton in South Burlington was explained as purely coincidental, but the symbolism was potent.

AGC-VT and Phil Scott have had a long symbiotic relationship. The powerful group — of which Scott is a past president — has endorsed all of his bids for statewide office, and his 2016 campaign rented office space owned by the Vermont chapter. The building is next to the Middlesex company where Scott is a half-owner, DuBois Construction. Scott said he would sell his stake in the company to allay concerns about a possible conflict of interest when he takes office next month.

Roughly a third of all the governor-elect’s corporate campaign contributions came from businesses in the construction and building industry, including developers, according to a VTDigger analysis of campaign finance data.

These donors — who gave more than $170,000 throughout the campaign — include residential and industrial construction companies that create everything from house doors to major highways, as well as large real estate developers.

Of those donations, many came from companies that have received millions in state transportation contracts in the last year alone.

Scott won’t be the first governor to have benefited from big business support. Democratic Gov. Peter Shumlin has been dogged by suggestions he is too close to campaign contributors, including EB-5 developers Bill Stenger and Ariel Quiros. The men gave a combined $20,000 to Shumlin through various companies and associates over the course of his 2012 and 2014 re-election bids.

Shumlin has also been blasted for his ties to other contributors, including Green Mountain Power and renewable energy developer David Blittersdorf.

In his final 2014 campaign, Shumlin received some money from the Vermont construction world, though its members showed much less enthusiasm than for Scott. According to publicly available campaign finance reports, none of the big four state contracting companies listed above pitched in for Shumlin’s 2014 bid.

(Scott, in addition to corporate donations from the construction and development world, received tens of thousands of dollars in individual donations from people who run companies or work in these industries.)

Cathy Lamberton, the executive vice president of AGC-VT, is an unabashed Scott supporter and spoke highly of him as an ally to her members. She was a featured speaker at Scott’s kickoff but told VTDigger that the virtual overlapping of the annual meeting and Scott’s event was “a coincidence.”

Lamberton said AGC-VT members feel they have a sympathetic ear in Scott and are hopeful as he lays out his two-year agenda. 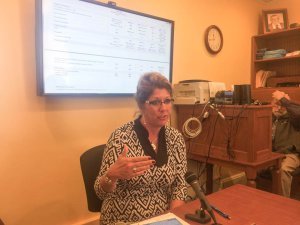 Cathy Lamberton of the Associated General Contractors of Vermont testifies before a legislative committee.

“We know that Scott understands the challenges construction companies go through,” Lamberton said. “We don’t believe that we are going to get everything we like. We just want an opportunity to correspond with the governor and his administration.”

This year’s annual conference of AGC-VT again took place at the Sheraton. This time, Scott held no event of his own but gave the keynote address. The conference included Scott’s newly appointed chief of staff, Jason Gibbs, who moderated a panel titled “Leadership Meeting.”

In an interview Monday, Scott did not shy away from his long-standing relationship with the Associated General Contractors of Vermont, recalling that his early work on the trade group’s legislative affairs committee had pushed him to go into public service.

“Their motto is ‘Skill, Integrity and Responsibility,’” Scott said. “And I fully adopt those principles.”

Scott rejects the idea that he would use his position to benefit his campaign contributors or his former company, the same way he frowned at claims during the campaign that he tried to help his business during his tenure as a state senator and then lieutenant governor.

“We will prove ourselves, and I think that’s incumbent on this administration,” Scott said. “We will prove that this isn’t political in nature, this is about getting something accomplished.”

Last year, the Legislature considered, but ultimately did not approve, the establishment of a state ethics commission, whose proposed rules could have prevented numerous contractors from making political campaign donations.

One of the provisions discussed would have precluded contributions in the gubernatorial race from anyone bidding on or holding state contracts, large and small, from highway construction to grass cutting. The idea was to prevent transactions and contracts referred to as “pay to play” in political parlance. Senators dropped the provision after they said too many Vermonters would be affected.

Senators are expected to discuss the establishment of an ethics commission again this session.