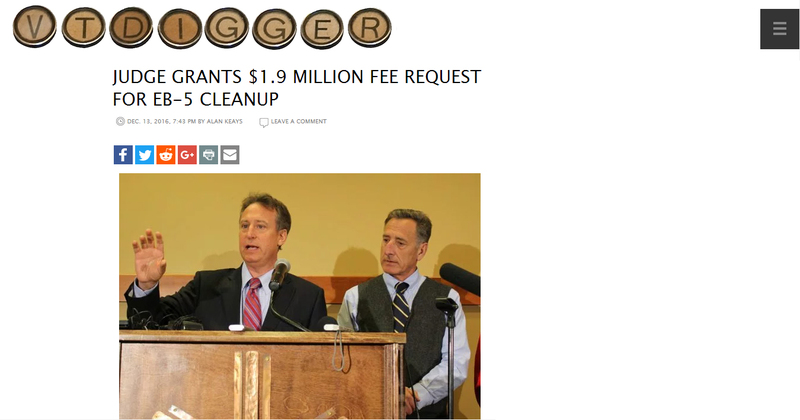 Michael Goldberg, left, the receiver for the Jay Peak and Burke ski areas, and Gov. Peter Shumlin at an April press conference at Jay Peak Resort.

A federal judge has approved the $1.9 million request for legal and professional fees for work done overseeing ski resorts and other seized properties in an investor fraud case in northern Vermont.

Michael Goldberg, the court appointed receiver put in charge of the Jay Peak and Burke Mountain resorts, made the fee request in a filing last month. He wrote that the $1.9 million represented the bills accumulated from the time the resorts were seized by the federal government in April through Oct. 31.

“The professionals have provided valuable services, including locating additional funds for the receivership estate, disposing of assets, and negotiating settlements — all to the benefit of the investors and creditors,” Gayles wrote.

“In addition,” the order stated, “the professionals have operated and maintained a large ski resort, working for months without pay and at significantly reduced rates.”

The money to pay the fees is expected to come from a recently approved $13.3 million settlement between the receiver and Citibank, a financial institution Quiros had used to take out a line of credit.

The judge Tuesday awarded $1,883,900 in attorney and professional fees as well as $69,566 for reimbursement of expenses. That totals $1,953,466 for the work put into stabilizing the resorts that were on the brink of bankruptcy.

“The Receiver recognizes that this is an optically large amount,” Goldberg wrote in his filing, “however, it is important to recognize that this fee application covers a nearly seven month period and the professionals who seek payment hereunder have collectively discounted their fees by over $875,000 off their regular rates.”

The professional fees and expenses included a little more than $600,000 for Soneet Kapila, a certified public accountant, and the accounting firm Kapila Mukamal, based in Florida. They did accounting and forensic work for the receivership.

Quiros and Stenger are accused in the SEC lawsuit as well as one brought by the state of Vermont of misusing more than $200 million in funds raised over eight years through the EB-5 immigrant investor program. The funds were supposed to pay for specific projects in the resort towns of Jay and Burke as well as the city of Newport.

Federal regulators accuse Stenger and Quiros of operating a “Ponzi-like” scheme. The SEC lawsuit accuses Quiros of using investor funds to pay for personal expenses, such as the purchase of a $2.2 million luxury condo in Trump Tower in New York City.