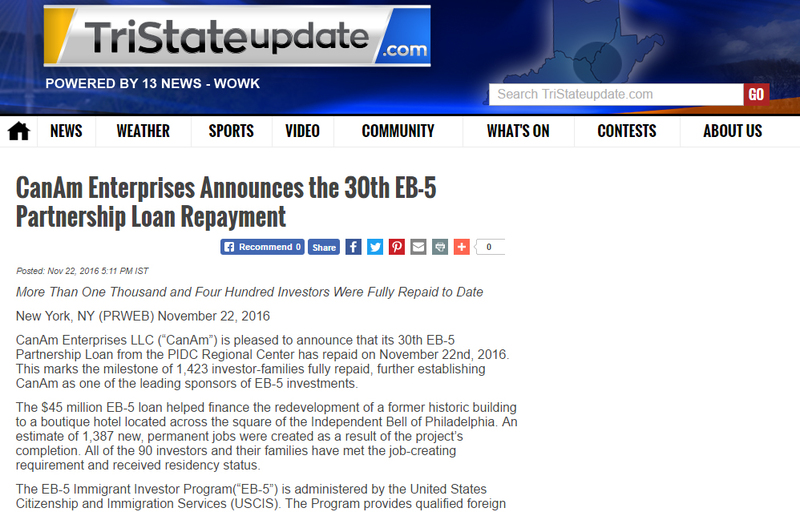 CanAm Enterprises LLC (“CanAm”) is pleased to announce that its 30th EB-5 Partnership Loan from the PIDC Regional Center has repaid on November 22nd, 2016. This marks the milestone of 1,423 investor-families fully repaid, further establishing CanAm as one of the leading sponsors of EB-5 investments.

The $45 million EB-5 loan helped finance the redevelopment of a former historic building to a boutique hotel located across the square of the Independent Bell of Philadelphia. An estimate of 1,387 new, permanent jobs were created as a result of the project’s completion. All of the 90 investors and their families have met the job-creating requirement and received residency status.

The EB-5 Immigrant Investor Program(“EB-5”) is administered by the United States Citizenship and Immigration Services (USCIS). The Program provides qualified foreign investors with the opportunity to earn “conditional” or temporary two-year visas in return for investing $500,000 in businesses located in high unemployment areas that create or retain at least ten permanent full-time jobs for U.S. workers.

CanAm President and CEO Tom Rosenfeld, a Philadelphia native, started this business in Philadelphia following a highly successful similar program in Canada starting in 1987. “In partnership with PIDC, we do exhaustive research to find qualified projects for investment, and we work just as hard to ensure that our borrowers follow the job creation formula required by the EB-5 model,” Rosenfeld said. “We follow the law to the letter. We constantly monitor all of our projects to ensure that the job creation goals are being met, and we work with our investors and the federal government to keep them fully informed about the status of the Regional Center projects.”

“The program works,” said PIDC President, John Grady. “It has been invaluable as a resource for investment in Philadelphia projects. The partnership between CanAm and PIDC has succeeded in attracting hundreds of millions of dollars to the city, and we look forward to working together to bring even more investment to Philadelphia in the years to come.”

“Even as the Program has grown, the CanAm PIDC Regional Center remains one of the pioneers and most enduring success stories. It has been an amazing 13 years, and we are very proud to have been part of some of the most important projects in the Philadelphia region,” added Rosenfeld.

PIDC is Philadelphia’s public-private economic development corporation. A non-profit founded in 1958 by the City of Philadelphia and the Greater Philadelphia Chamber of Commerce, PIDC’s mission is to spur investment, support business growth, and foster developments that create jobs, revitalize neighborhoods, and drive growth to every corner of Philadelphia. Over the last 58 years, PIDC has invested nearly $14 billion of financing and more than 3,100 acres of land sales – which has leveraged over $25 billion in total investment and assisted in retaining and creating hundreds of thousands of jobs in Philadelphia.

With three decades of experience promoting immigration-linked investments in the United States and Canada, CanAm has a long and established track record. Based on a reputation of credibility and trust, CanAm has financed more than 53 project loans and raised more than $2.3 billion in EB-5 investments. CanAm exclusively operates seven USCIS-designated Regional Centers that are located in the City of Philadelphia, the Commonwealth of Pennsylvania, the County of Los Angeles, the State of Hawaii, the Metropolitan Region of New York, the State of Florida and the State of Texas.