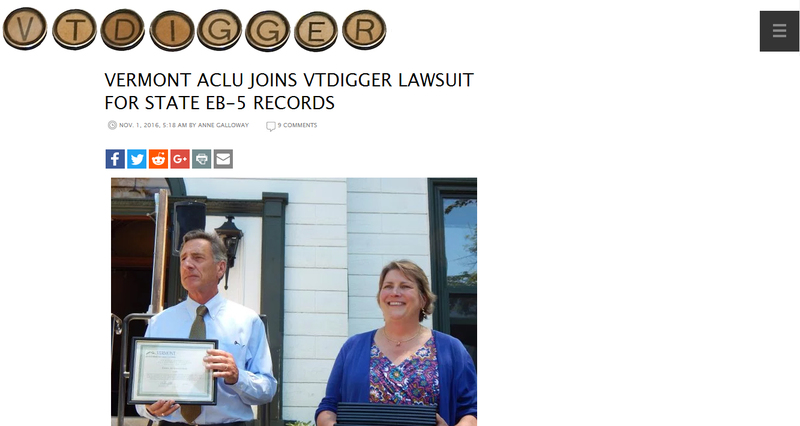 Gov. Peter Shumlin and Pat Moulton, who was then secretary of commerce and community development, at an event in Brattleboro in July.

The Vermont chapter of the American Civil Liberties Union has joined the VTDigger lawsuit to obtain records regarding oversight of the state’s EB-5 immigrant investor program.

Tim Cornell of the Boston firm Cornell Dolan is lead counsel for the case on behalf of VTDigger and its parent organization, the Vermont Journalism Trust. Cornell focuses on First Amendment, False Claims Act and securities cases. He is a former Rutland Herald reporter and former attorney with the Securities and Exchange Commission.

“When I was a reporter during the (Madeleine) Kunin administration, government was far more open and responsive to public records requests,” Cornell said. “We hope this suit can start to restore that openness.”

Lia Ernst, an attorney with the Vermont ACLU, will serve as co-counsel. She has clerked for the U.S. Court of Appeals for the 1st Circuit and the U.S. District Court for the Eastern District of Michigan.

“The ACLU of Vermont has long been fighting for a more accountable and transparent government,” Ernst said. “Unfortunately, public agencies throughout the state have a tendency to vastly overstate the breadth and applicability of the Public Records Act’s exemptions, despite the act’s purpose and policy of providing for free and open examination of agency records. The state’s claim of a blanket exemption for all records related to the EB-5 program is a disappointing and unlawful example of exactly that tendency.”

VTDigger is suing the state of Vermont to obtain records associated with oversight of the EB-5 program in Vermont. The program has been the subject of investigative reporting by VTDigger for more than two years. Last spring the SEC and the state accused Northeast Kingdom developers Bill Stenger and Ariel Quiros of misusing more than $200 million obtained from investors through the program.

VTDigger has asked the Washington County Superior Court judge to take up the case immediately. On Monday the news organization submitted discovery questions to the state. The state must respond to those questions right away.

The news organization alleges the administration of Gov. Peter Shumlin has improperly withheld documents, including correspondence between key members of the administration and federal officials about the status of the Vermont EB-5 Regional Center.

Officials with the Agency of Commerce and Community Development have refused to release correspondence about a federal review of the Vermont EB-5 Regional Center. The state was responsible for overseeing the massive redevelopment of Jay Peak that has been tied to an alleged “Ponzi-like” scheme.

It is not known what the federal review by U.S. Citizenship and Immigration Services entails because the government agency won’t respond to questions about it, and the state has also kept mum. The USCIS review is separate from the Securities and Exchange Commission investigation of alleged fraud at Jay Peak.

U.S. Citizenship and Immigration Services requested information from the state in August. Neither the request nor the state’s response has been released to VTDigger or to the Burlington Free Press, which also requested documents.

Because of the information blackout, the status of the Vermont EB-5 Regional Center is unclear, and it is not known whether the state program has been penalized in any way.

VTDigger is seeking communication between the Agency of Commerce and Community Development and U.S. Citizenship and Immigration Services for a seven-day period.

Under the advice of the Vermont attorney general’s office, the agency has refused to release records pertaining to the EB-5 program, claiming the “litigation hold” exemption in the Vermont Public Records Act. The attorney general is arguing the documents need to be kept private because they could be part of a court case.

Attorney General William Sorrell has told reporters that all state communication about the EB-5 program would be withheld until the fraud litigation is concluded. Officials have said the civil cases could take at least five years. The SEC doesn’t anticipate the Quiros case going to trial until a year from now. If the U.S. attorney files criminal charges against the developers and others, that could also take a year.

VTDigger argues that the documents requested are “not in any way relevant” to the fraud case brought by the state against Quiros and Stenger and should be released to the public immediately.