Fixing The Cone Of Silence? 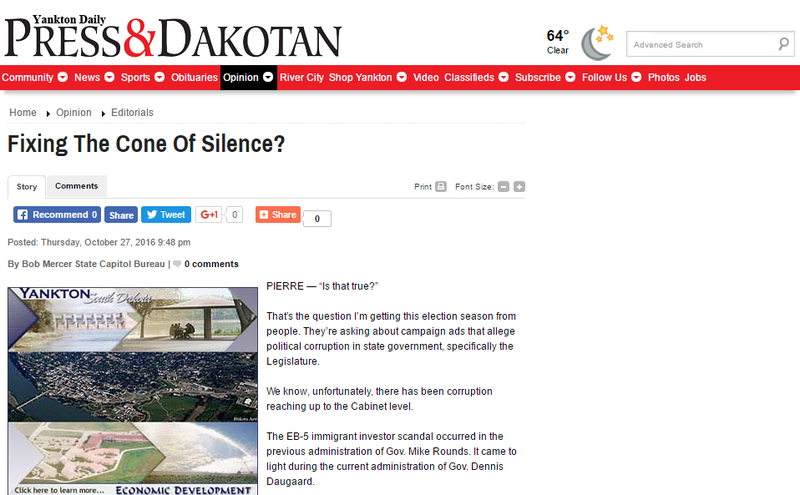 That’s the question I’m getting this election season from people. They’re asking about campaign ads that allege political corruption in state government, specifically the Legislature.

We know, unfortunately, there has been corruption reaching up to the Cabinet level.

It came to light during the current administration of Gov. Dennis Daugaard.

The public didn’t know about it until after Richard Benda, a former Cabinet secretary for Rounds, reportedly killed himself three Octobers ago.

We didn’t know the investigation had been under way at the federal and state levels for months.

A pending grand-jury appearance very well might have triggered Benda’s death by shotgun.

We didn’t know until about 10 months after he died that state Attorney General Marty Jackley planned to take Benda before a grand jury.

The public learned about the grand jury only because a committee of the Legislature wanted more information from Jackley about EB-5.

The cone of silence extended so deeply that the state’s auditor general, who serves as a watchdog for the Legislature on state government’s financial activities, didn’t know about the semi-secret EB-5 accounts.

The cone of silence hid for years another scandal, regarding millions of dollars in misdirected funds for the Gear Up program.

During the past two years, the auditor general uncovered some financial weaknesses in the state Department of Education’s administration of Gear Up.

One involved payments to two former state officials, Rick Melmer and Keith Moore, whom Education Secretary Melody Schopp had approved to watch over Gear Up.

They were under contract to the Mid Central Education Cooperative at Platte that ran Gear Up.

The auditor general’s investigation of Gear Up deepened. The Legislature’s Government Operations and Audit Committee began to dig into it.

The attorney general hadn’t paid any attention to the auditor general’s findings on Gear Up until one morning in September 2015. The six members of the Westerhuis family were shot to death and found in the rubble of their burned-down house just outside Platte.

Scott Westerhuis was business manager for Mid Central. His spouse, Nicole Westerhuis, was an assistant business manager. He allegedly did the killings. Both were deeply involved in Gear Up with its director, Stacy Phelps.

Phelps was a Rounds and Daugaard appointee serving on the state Board of Education.

The attorney general now has three people, including Phelps, under indictment over Gear Up.

He also has under indictment Joop Bollen, who was Benda’s partner in EB-5 and held the state contract for its administration.

South Dakota hadn’t seen such corruption before in modern times.

None of this would be directly affected, however, under the three measures on the Nov. 8 statewide election ballot that seek to change state government’s elections system.

Initiated measure 22 would impose new restrictions on the conduct of legislators and state officials and provide public funding that could be used by candidates seeking election.

Constitutional amendment T would create a new commission that would draw legislative districts. The Legislature currently does that every decade.

Constitutional amendment V would create a system of nonpartisan elections.

They seek to diminish Republicans’ control of state government. You can debate whether that is needed or not and whether the changes would accomplish it.

But as corruption-control measures, they aim at the wrong target. The public knows about the two scandals because people died violently and the Legislature eventually looked into matters.

The Legislature should dig deeper. The third and fourth floors of the Capitol, where legislators work, aren’t where the cone of silence began.